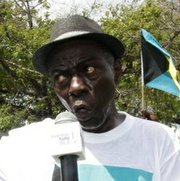 Very few cases of abuse are reported due to cultural stigma, according to Mrs Nicolls, who criticised Mr Miller for spreading damaging propaganda against the law.

Mrs Nicolls, senior volunteer counsellor at the Bahamas Crisis Centre, said: “It’s an assumption that sexual harassment is stupid, especially in the Caribbean because I can call out ‘hey sexy hey’ to a woman and it’s never considered that it may be offensive.

“It’s a concept that a woman is just causing trouble for men, so that’s why (Miller) says the laws are stupid and these things should not exist.

She added: “His whole thing is personal and it’s offensive because it is minimizing and belittling the plight of several women, a lot of whom will not say anything simply because of the propaganda he is spreading. Many women are frightened for their job and know that they are not going to have the support if they come forward because of the mind-set of Darold Miller and people like him are spreading.”

She added: “They are discrediting that sexual harassment can even happen. The laws are put in place to protect people because their rights are being trampled on, because he has that mind-set, because he went through his thing and got accused.”

The “lively and provocative” host took to the airwaves to condemn the law on sexual harassment as “one of the major shortcomings” of the penal code, and was joined by several callers who suggested that the law disadvantaged men. Mr Miller said he was moved to divert from his show’s theme and discuss the sexual offence law after reading a Tribune article that revealed a police officer had been taken into custody for questioning for sexual harassment.

He said: “Five years was damaged out of my life, but you know what we gotta do, this stupid law of sexual harassment says if you look at a woman in a manner that is offensive to that woman you can be charged with sexual harassment. I never heard nothing so foolish, that is the most stupid law on the books of the Commonwealth of the Bahamas.

“First of all,” he added, “they’re walking around – I want to look offensive at you so you can put some clothes on your body. What you’re doing is offensive to me. Under the present law, unless you lobby against it, you can be charged with sexual harassment for flirting.”

Mr Miller added: “What’s so sad about it is, when you do your job people find all kinds of ways and means to discredit you, for me that’s the bottom line. They find a way to perpetrate some fraud against you, that is the sad part and then they hide behind these nebulous laws to get their points across.”

On September 10, 2008 Darold Miller was acquitted of sexual harassment after an eight-month-long trial into accusations that he importuned a female GEMS employee for sexual favours as the company’s Chief Operating Officer. Magistrate Renee McKay ruled that given the evidence she was not satisfied he had committed the offence.

Mrs Nicolls said: “We all have to view this thing in a very systemic way because if we don’t we will continue. We’re always blaming the women, and so men are absolved for every single thing that they do. Men were born with the right to be everything, so you could speak to a women, talk to a women any kind of way because women were really property.

“Over the years women fought for their rights, but it is still ingrained in men’s heads. Even going to the biblical story of Eve, that story also demeans women because women are the cause of everything that’s evil. So when a man who is born and reared in this kind of paradigm, that what I do is right and you have to obey me, then they will make those kinds of proclamations.”

"Even going to the biblical story of Eve, that story also demeans women because women are the cause of everything that’s evil."

No this story does not "demean" women. If that is what happened then all we can do is meditate on it. If anybody does something wrong, then they are wrong, male or female, it doesn't mean that it's "demeaning" to the entire sex. Also, If i remember correctly, Adam opted to eat of the fruit himself and was also in the wrong, and all of the parties present (Adam, Eve, and satan) were punished. Also, look at who God approached first - Adam! Also, the bible teaches that sin is perpetuated through the seed of man. So perhaps this story actually demeans us as men! (sarcasm is intentional).