Fnm: Judicial System Is Being Neglected 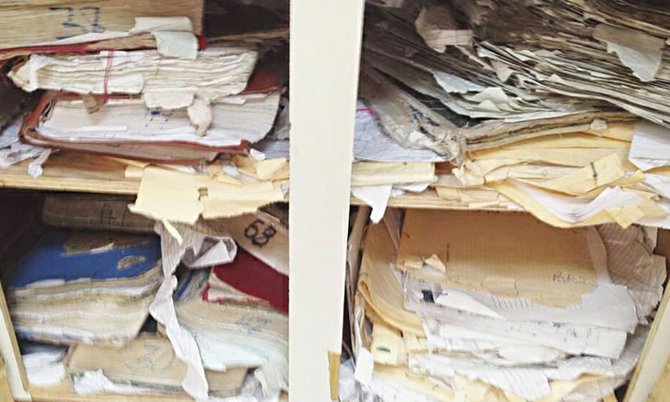 Some of the stacks of files said to be part of the Supreme Court backlog - stacked in tattered folders and in poor condition.

OPPOSITION leader Dr Hubert Minnis said the government cannot be serious about reducing crime if they continue to neglect the judicial system.

Dr Minnis said he dropped by the Public Prosecutions office last week, only to discover that the new facility was still “filthy, disorganised and uninhabitable”.

He said prosecutors have been working out of their cars since last year and the government refuses to improve their working conditions.

“They cannot be serious about crime; look at how they are treating their prosecutors. Files are everywhere and unorganised. There is no system and it is very difficult for individuals to review and prepare documents properly in conditions like that,” he said.

“I drove past last week and nothing has changed from when I sounded the alarm last year. They are still working out of their cars and the morale is low. Those who choose to work inside the building are crammed in a small space and the papers are thrown everywhere, unmarked. It is ridiculous.”

Dr Minnis said the government has to move toward a digitized system instead of writing everything down and sticking them in boxes that could be lost or destroyed.

According to a source, who asked to remain anonymous, the Supreme Court registry is also in a “terrible state” with boxes of unmarked files “piled high to the sky.”

“It is not electronic, nothing there is and almost all the paper records look like this. Files are constantly lost and matters disappear completely all the time. Nothing is being done about this and our judicial system will only continue to suffer if nobody brings this foolishness to light. The government wants to build more courts to hear more matters but if  those matters end up in the current system we will still end up with the same result,” the source said.

Last year, the Inter American Development Bank (IDB) said they were concerned about the administration of justice in the Bahamas.

In a recent report, the IDB suggested that the government moves towards a “modern digital” information system.

To improve court reporting and transcript generation, which the IDB notes still consists of a transcriber, while the modern digital court reporting includes broadcast quality microphones and digital recorders, the IDB has committed $110,00 while another $77,000 will be to support the implementation of an integration justice information system with an efficient business model that will seek to strengthen cooperation, coordination and communication among the Attorney General’s Office, the police and the judiciary and $66,000 will go towards the reduction of the Supreme Court’s backlog,” the report said.

Wow -- a third world judicial system for our supreme court. This is the state of court records?

Yep, these are the records that send criminals back on the street. Because when they check, it either cant be found, or destroyed. Imagine the silver fish infestation. How embarrassing.

Looks like one of my old gym lockers....at least I cleaned it out every few months!...A second world nation trying really hard to be a third.....

If this is true then no wonder the country is in such a mess. Has the Public Prosecutor not heard of the computerization of documents? What an utter shambles.

If only they cared while in office instead of out! SMT. hypocrisy at its finest....