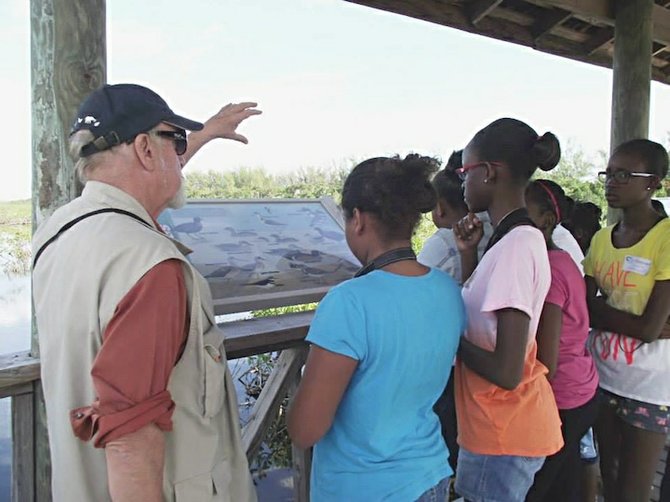 FREEPORT – Earthcare and Save the Bays have launched an Environmental Education Programme for junior high school students on Grand Bahama.

The programme started on Saturday, January 25, with a session on mangrove education at the Mary Star of the Sea Auditorium at noon.

Well-known mangrove specialist Martin Keeley, of the Mangrove Action Project in the Cayman Islands, spoke to the students and accompanied them on a field trip to the Lucayan National Park, where they were able to see an actual mangrove forest.

Gail Woon, founder of Earthcare and director of Save the Bays, said the programme is geared towards students in grades seven to nine.

The purpose of the programme, she said, is to educate students about environmental issues affecting the Bahamas.

“Our mandate is environmental education and we were able to partner with Save the Bays to do this programme from some funds we had available; we are trying to increase environmental awareness,” she said.

Ms Woon said students from 13 schools on the island were invited to participate in the programme, which runs until April 5.

They meet with students every two weeks. At each session, the students are taken on a field trip.

She said they hope that students will become good environmental stewards and take the information they have learned back to their peers and establish a science or environmental club.

Mr Keeley, who lives in the Cayman Islands, writes mangrove education curricula for schools around the world.

During his presentation, Mr Keeley taught participants about the chemistry and physics of fresh and salt water, the hydrological cycle, adaptation in nature, the food web, and most importantly, the value of mangrove forests.

“It is vital that students and teachers understand the true value of mangroves – one of the world’s most biodiverse and yet threatened habitats,” Mr Keeley said.

He stressed that the mangrove forest is an amazing ecosystem that needs to be protected.

Mr Keeley said that both students and teachers were very excited to learn about the mangroves, and about the hands-on experience they received from the field trip.

“The Marvellous Mangroves education system is linked directly into the schools curriculum – no matter which country it is developed and translated for,” he explained.

“It is hands-on science and social studies-based to reinforce concepts learned at both a primary and secondary student level.”

Mr Keeley has been instrumental in teaching teachers the value of mangroves globally. He has trained teachers in Asia, Central and South America, and the Caribbean, and will be continuing this work, travelling extensively in 2014.

Ms Woon said he also conducted a workshop for teachers, tour guides, and interested persons at Mary Star of the Sea School at 2.30pm on Sunday.

While mangroves are protected in the Bahamas, Ms Woon said that many stands have been bulldozed for mega-developments.

She stated that mangrove forests build land by catching sediment in their root systems, reducing erosion from storm surges, currents, waves, and tides.

Ms Woon also stated that research has shown that mangroves are able to absorb between 70-90 per cent of the energy from a normal wave.

Mangroves, she added, act as the Earth’s most effective carbon storage and CO2 absorption system to help mitigate the impacts of climate change.