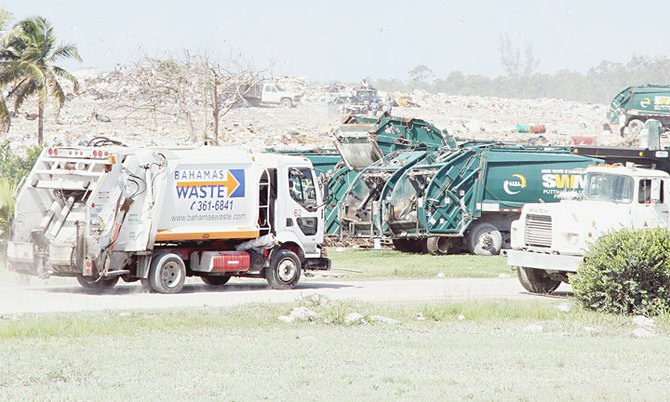 The Government told Bahamian providers it will earn $5 million per annum from the recycled products manufacturing joint venture at the New Providence landfill, although it still “seemingly can’t explain” the deal with Renew Bahamas.

Ginny McKinney, Waste Not’s principal. told Tribune Business yesterday that Kenred Dorsett, minister of the environment, gave projections for the Government’s share of the profits when local companies were invited to re-bid on the landfill management contract.

The invitation, extended to Waste Not and other Bahamian companies that were part of the Bahamas Renewable Energy Resources (BRER) Group, was intended to see if they could “match” the Renew Bahamas proposal.

The Government, by that date, had already selected Renew Bahamas as its preferred landfill manager, and Ms McKinney again said “it boggles the mind” that neither party can apparently disclose full details of their arrangements.

Recalling the meeting with Mr Dorsett and other government officials, Ms McKinney revealed: “He said Renew Bahamas would be building an $8-10 million MRF (materials

facility) and mining the old landfill (we had previously estimated it would take $11 million to do that over 15 years ago).

“They would be processing all the incoming waste and capturing enough recyclables from that and the mining to pay the Government $5 million per annum in profit sharing.

“He [Mr Dorsett] also said they would still give the tipping fee to the Government and that no monies would be required from the Government once Renew Bahamas took over.”

Mr Dorsett did not return Tribune Business messages seeking comment that were left on his cell phone yesterday.

However, Ms McKinney said the Bahamian waste service providers responded by asking Mr Dorsett to supply more details on the Renew Bahamas proposal, so they could judge whether it was viable.

“We said: ‘Tell us or show us the plan’. We’d have been happy to join in supporting that and promoting that,” she added yesterday.

Neither the Government nor Renew Bahamas have provided full details on their plans for the New Providence landfill as yet. The secrecy surrounding their arrangement, and the fact no public tender or Request for Proposal (RFP) for the landfill was ever issued, has caused some observers to liken it to the type of non-transparent contract referenced in the US State Department’s Investment Climate report on the Bahamas.

And several sources, speaking on condition of anonymity, questioned how Renew Bahamas knew exactly what the Government wanted when all other parties were effectively ‘bidding in the dark’ in the absence of a public tender.

E-mails obtained by Tribune Business show how the BRER group moved to adjust its bid, dropping waste-to-energy as part of its proposal, and agreeing to leave tipping fees with the Government.

Ms McKinney, on August 7 last year, asked Mr Dorsett for “parameters” for their revised offer, which they had just two weeks to prepare.

Interestingly, in his response, Mr Dorsett said the Bahamian group’s proposal should include plans to absorb all Department of Environmental Health Services (DEHS) personnel at the landfill.

This totally contrasts with the arrangement seemingly reached with Renew Bahamas, given that those workers are now idle - but still paid - as they wait to be transferred to a proposed Parks and Beaches Authority.

Mr Dorsett had told the Bahamian group: “You should submit a proposal that addresses landfill remediation, mining and de-construction of the entire New Providence landfill (you must also state the timeframe in which you will complete the same); the installation of two new weighbridges with vehicle recognition software; the construction of a Materials Recycling Facility; the acquisition of all heavy equipment necessary to maintain the site; the provision of security for the landfill; the transfer of all DEHS employees for your account;the acquisition and installation of fire fighting equipment; complete capital expenditure information;. a detailed business proposal outlining expenditure and revenue; proof of funding for the project and a performance bond.

“The proposal should also indicate who your technical advisers are, outline their experience in such matters and the cost of their services. “

Pointing to the Government’s demand that the Bahamian group provide full proof of financing, and supply all the heavy equipment, Ms McKinney questioned whether the same conditions had been imposed on Renew Bahamas in light of recent events.

Heavy equipment had sat idle at the landfill after Renew Bahamas took over operations, due to the Government’s failure to provide money for fuel, and Ms McKinney said that episode raised “questions about the integrity of the deal”.

“If we went that far [proof of financing], surely they had to go that far with Renew Bahamas. To give them a contract to take over the landfill now and not have money for fuel just defies description to me,” she added.

“If they had gone in there and there had been no problem, people would have said: ‘Get on with it’. But the fact there has been a hiccup, some challenges, does question the integrity of the deal.”

And Ms McKinney reiterated via e-mail: “If Renew Bahamas, having taken over, cannot afford the diesel to run one bulldozer, where is the funding coming from that will build the MRF, buy the machinery necessary to mine the landfill or remediate the leachate, gas and potential landslide of Cell number one? Will the Government be paying for this stuff as well?

“Why don’t they just publish the agreement? If it is signed sealed and delivered and they are comfortable with it, what’s to hide?”

Ms Mckinney told Tribune Business that the private sector had received little credit for its efforts to solve the landfill’s problems, and had to endure issues such as an aborted waste-to-energy process under the former Ingraham administration.

She added that an Inter-American Development Bank (IDB) financed report by Stantec, produced 20 years ago, had set out a plan to tackle the landfill’s problems, but no government saw fit to implement it.

“What the Minister misses entirely is that we as professionals waited, waited and waited,” Ms McKinney said. “The landfill was still there, still a problem and still needed to be resolved.

“We all got together, and that’s where the Minister never acknowledges - it was a private sector initiative that came out of a need top be addressed, which the Government was putting off and putting off.

“Now, here we are with their solution, which they seemingly can’t explain. Just explain what the deal is.”

Ms McKinney said that as a publicly-owned facility providing essential services to the Bahamian people, the public had a right to fill disclosure of all the terms agreed between the Government and Renew Bahamas.

She added that the Bahamian providers had looked at a waste-to-energy solution because it was the one that would deliver the “greatest return for the Bahamian people.

She added via e-mail: “ Under the FNM administration, when we proposed for just the landfill management, the business plan required that the tipping fee per ton be increased and go to us, the management company, (and that all waste crossing the scale paid the fee).

“Those monies would then build the MRF, recycle what could be recycled, remediate gas and leachate problems, engineer a solution for Cell No.1 and build additional lined cells to receive the waste which could not be recycled.

“We had full Bahamian financing in place when we presented that proposal to the FNM. This approach would have required the Bahamian taxpayer to cover the tipping fees.”

The company, which is 60 per cent foreign-owned, also appears to have a link to one of the British Colonial Hilton’s owners. One of Renew Bahamas’ two listed directors is Gerhard Beukes, a former investment manager at Adurion Capital, the boutique investment house that is one of the downtown resort’s two shareholders.

The Companies Registry files list two directors, Mr Beukes and Een Colebrooke, who appears to be a Bahamian. Mr Beukes is now an executive with London-based Aubaine Capital, a boutique investment/finance house that was spun-off from Adurion via management buyout in 2011.

Apart from touting its investment in the British Colonial Hilton (which it and its Canadian pension fund partner, the Canadian Commercial Workers Industry Pension Plan, have been trying to sell), Aubaine’s website lists another of its holdings as ITI Energy.

This is described as a manufacturer of a gasification system that is “particularly suited” to the conversion of household waste typically found in landfills, transforming this into fuel that can drive combustion engines and produce energy.

Mr Beukes is a non-executive director of ITI Energy, whose three projects to-date are all based in the UK.

This deal stink's worse than the landfill itself. It would be very interesting to know who the real owners are of this company. We already know that our esteemed DPM is making money out of the deal by having the company use his law firm. You know that is how it works, use my law firm and we will make sure you get inside info and the deal, Oh yes, I want a cut of the company as well. Stinken rotten scum!

Exactly, this was my point when first heard it. How can an established company not have sufficient capital to run for one month? They would know the monthly costs of such an operation because of course the government would never hand over such an important function to some fly by night company who had no clue what they were doing. So knowing the costs and providing evidence that they could handle it, how could they not operate for one month?

Renew Bahamas is all about the little grubby dirty sticky fingers of Brave Davis....AND U.S. GOVERNMENT KNOWS THAT CHRISTIE HIMSELF KNOWS FULL WELL THAT THIS IS THE CASE!

become millionaire now, before the window of opportunity closes

become millionaire now, before the window of opportunity closes

The Bahamas has always been a real paradise and safe haven for pirates and privateers.

Privateers are an integral part of the history of The Bahamas. The rampages of Edward Teach alias Blackbeard, Sir Henry Morgan, John Rackham alias Calico Jack and many others are legendary.

The escapades continue with the ongoing shenanigans of the PLP and FNM who now call themselves M.P.'s instead of carrying a privateers license called 'Letter of Marque' issued by a government.

"BAHAMIANS FIRST" they promised.....They conveniently didn't tell us they were just referring to themselves!

All of us should take comfort that Davis is assured to get his comeuppance at the end of the day!

No wonder people tryin' to rob Brave Davis, he must have plenty of undisclosed cash in his house.