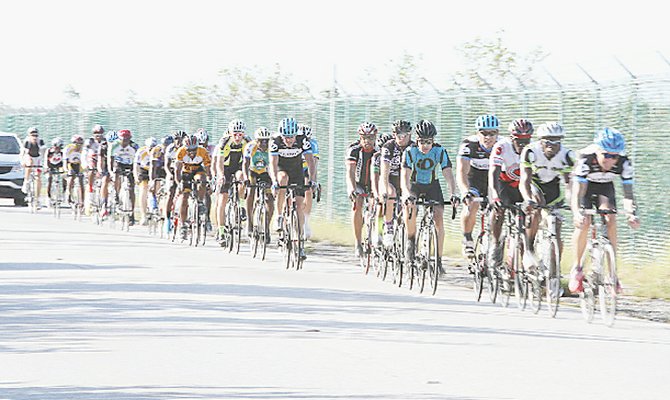 With four of the five members of the national team preparing to travel to Glasgow, Scotland, for the Commonwealth Games this week, Jay Major showed that he was fit and ready to lead the charge as he out-sprinted teenager Liam Holowesko to capture the Bahamas Cycling Federation’s National Road Race title.

Sunday’s gruelling 75-mile road race that started and finished in front of the Caves on West Bay Street saw Major deny Holowesko the opportunity to dominate the weekend after he was the winner of the National Time Trials held at the same location on Independence Day.

Major, who placed sixth in the time trials, came down to a break-away sprint with Holowesko at the finish line before he used his experience to surge ahead, stopping the clock in three hours, 13 minutes and 10 seconds. Holowesko trailed in 3:12:08 for a close second place.

“The race went to our plan. We sat on the pack for the first half of the race and we let who wanted to go go and we just pulled them back,” Major said. “In the second half of the race, it definitely went as planned and after there was a break with the top cyclists, me and Liam worked together for the final break on the last lap and we sprinted it out.”

Their break came as they got off Blake Road and onto JFK Drive where they sustained it right to the finish line.

“It was hard, but I enjoyed myself. I’m just glad to be the national champion going into the Commonwealth Games. It’s really a confidence booster for me,” he said. “This will allow me to open my eyes and see the potential for me to perform very well at the Commonwealth Games. I know it won’t be easy, but I think this has shown me that I am ready for the challenge.”

At age 13, Holowesko is too young to make the trip to Glasgow as a member of the national team. But he didn’t mind being the spoiler as he just missed out on taking home the double national title in four days.

“For the majority of the race, I just sat in the bunch and finally when me and Jay had a chance to go for the break, we did and we worked together and we were able to pull away from the field,” Holowesko said.

“At the end of the day, I didn’t mind whether I won or not. He’s a really good rider, so I was just glad that I made the break with him. I just knew I couldn’t stay with him in the sprint.”

The Lyford Cay School student will have plenty to talk to his friends about when the new school year begins in September.

Not only did he win the national time trials and as the road runner-up, but prior to this week, he had just returned from winning the US Junior (13-14 years) National Time Trials Championships staged in Madison, Wisconsin, on the American Independence on July 4.

“It was a good week for me here,” he stated.

While Major and Holowesko battled it out for the top spot, there was another showdown between Colebrooke and Albury for third place. Colebrooke, 18, managed to get the edge over his 40-year-old rival.

“It was very hard up until the last two laps when they wasn’t giving us no water,” said Colebrooke. “My team made an early break, but after I tried to go with him, the others reeled us in because we got a little bit dehydrated out there. We didn’t get any water during the last two laps.”

Despite falling short, Colebrooke said he was just glad to get across the finish line.

“I definitely have to work on my endurance,” he said as he looks ahead to Glasgow. “I am really good at sprinting, so if I can stay with the pack, I know I can make the final peloton.”

For Albury, who is home on a break from his job in Perth, Australia to get ready for the Commonwealth Games, he faced some young cyclists who were more determined to win.

“Good job to Jay and Liam,” he said. “Me, Biggie and DeAngelo kept the pressure on, but these two young guys took advantage of being able to get down low in the head wind and they got the break and pulled away from us as they maintained it the rest of the way.”

As for the Commonwealth Games, Albury said the team got four out of the five top spots, so it showed their character.

“This really is a great stepping stone for the games,” he said.

There was a shorter 50-mile course for the open men and women, masters and senior III.

“The course was good. My plan was to stick with the big boys for as long as I could and then make my own move,” he said. “I expected the first that I got. I was really expecting the first in the men’s overall, but there was a young chap, who edged me out at the finish line.”

He was referring to 31-year-old Clotaire Pierre, the winner of the open divisional title. “It was great, challenging,” said Pierre, who made his debut.

“I have only been riding for six months, but I have a set of people in my group who have been pushing me to go for it. I’ve always been riding. I’ve been training competitively for the last six months, so it was pretty good. The competition was great.”

On Independence Day, Shantell Brown lost the national time trials title to Juliana Passos. This time, Brown made sure that the road race title was hers only. She won in 2:22.30 with Passos settling for second in 2:23.30.

The juniors did 40 miles with Antonio Roberts clocking 2:08:08 for the win to add the title to the national time trials that he collected on Independence Day. His nearest rival was Cecil Williams in 2::22.04.

“It was good. It went well. I’m glad that I won the title,” he said. “The guy that was riding with me, he turned the wrong way, but he turned around and tried to catch me, but it was too late. I was on my game. We had some rough wind on JFK, but other than that, it was smooth sailing.”