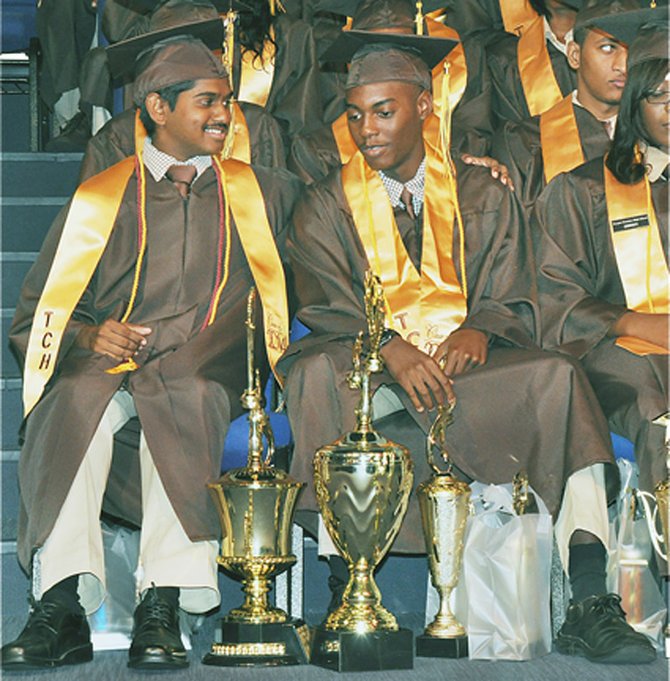 THREE young men of the Class of 2014 of Temple Christian High School captured top honours at the school’s graduation ceremony.

They are Daniel Jagessar, Terrance Arnold and Cameron Johnson.

Head Boy Daniel emerged as class valedictorian and received the Principal’s Award. He obtained first place prizes for mathematics, English language, physics, biology, chemistry, religious studies and Spanish and the second place prize for graphical communication. Daniel also received the Most Outstanding Student Award for mathematics, the BTC General Manager’s Award and a four-year scholarship from BEC to attend The College of The Bahamas all from participating in the Technical Cadet Corps Programme.

Terrance, deputy head boy, captured the Salutatorian Award. He received first place prizes for graphical communication and physical education and second place prizes for mathematics and physics. Terrance was given the Spirit Award for soccer and track and field. Cameron graduated in third place in the Class of 2014. He obtained first place prizes in Literature and art and design and the second place prize for English language. Cameron received honourable mention from Savannah College of Art and Design for his comic book entered in the college’s art competition.

Deputy Director of Education Marcellus Taylor gave the keynote address on behalf of the Jerome Fitzgerald, minister of education. Mr Taylor reminded the graduates that to succeed they would need to have a sense of personal direction.

“In order to have the results you desire in the future, you must commit yourselves to embracing the necessary attributes and skills that will keep you engaged like the magnetised needle in a compass that automatically swings to magnetic north,” he said.