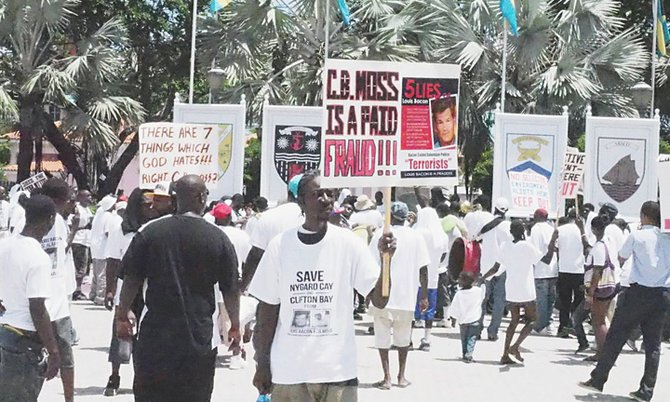 A PROMINENT environmental campaigner and religious leader has told The Tribune that people have confessed to his organisation that they were paid to march in support of Canadian fashion mogul Peter Nygard on Monday.

Rev CB Moss, a representative for the Coalition to Save Clifton Bay, yesterday called the demonstration a “gimmick” and an act of “desperation” that clearly has not convinced anyone other than Mr Nygard that the protestors genuinely support him.

“People are not fooled,” Rev Moss said. “It was a gimmick and it has backfired because it has infuriated a large number of residents who feel that it was distasteful for someone looking to do business with the government and the Bahamian people to sink to that low level of trying to influence the Bahamian people”.

On Monday, scores of Nygard supporters marched through downtown Nassau in defence of the fashion designer over the criticism he has received from environmentalists and other Lyford Cay residents concerning his controversial development plans at Simms Point/Nygard Cay. Rev Moss said the majority of the protestors were the same as those who have participated in other controversial marches.

He added that the fashion designer could have got more people to march if he had “spent more money”.

“When you see huge crowds at political rallies what do you think brought them there?” he asked.

“Certainly not the message. But it’s the food, drinks, entertainment and in some cases the free dollars.”

“That is not new. We’ve been seeing that in political elections and I’m not surprised. We do know that it’s sad when persons, particularly non-Bahamians feel that they have to get involved in the business of the Bahamas to the extent that they would do what is alleged to have been done by Mr Nygard. It was also libellous, some of the statements on the placards and t-shirts.

“I think the entire Bahamian society sees it for what it was and doesn’t take it seriously.”

Mr Nygard’s attorney Keod Smith yesterday denied that the supporters were paid to protest. He said that thousands of Bahamians stand in support of Mr Nygard rebuilding his home and wonders who would have paid them.

“Why is it that people in the Bahamas, especially the press, believe that people don’t love Mr Nygard and would not spontaneously show their support?” he questioned. “Is it so unbelievable?”

Mr Smith said those people have clearly been misguided. “They don’t want Mr Nygard to have a beach next to his home and they’re saying that he stole land. That’s what they’re saying and that is not true,” he said.

“The sad thing for Mr Nygard is most of the people in Lyford Cay just do not like the fact that black people have free access to come to Mr Nygard’s home, compared to any other house or any other home.

“I can tell you and I certainly know that there is no environmental issue.

“The people who you should be worried about with regards to Clifton is Louis Bacon. Louis Bacon is after the land at Clifton and has been. No one can challenge me on that.

“He can’t because he knows it’s the truth and I have proof on that going back as far as 17 years.”

Mr Smith insisted it was not Mr Nygard Bahamians should be worried about, but Mr Bacon.

Somebody paid for all those t-shirts, and from the look of those marching, they surely didn't buy them. Most look clueless as it is. Poor ignorant masses being exploited -- again.

As for not being black in Lyford Cay, doesn't Mr. Smith know there are blacks with homes living in Lyford Cay? And many others visit friends who live there as well, and belong to the Lyford Cay Club, so stop bringing the race card into this. Nygard is using the people to get his own way.

Boy it's something how these so called "good Lawyers" can't seem to find anything but race to help their fight..

Exactly what are all of the "black people" that have access to Nygard's home doing?