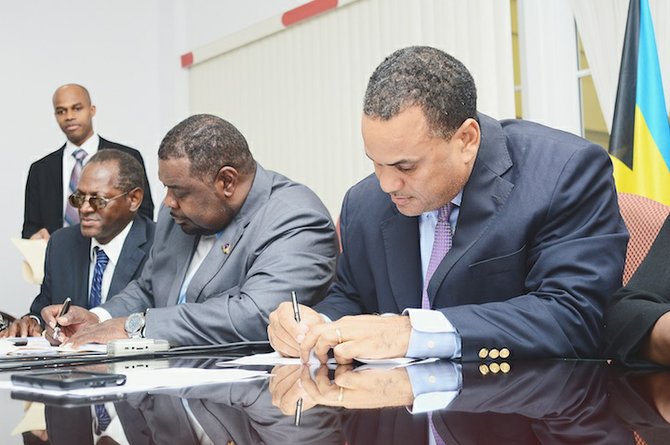 THE annual minimum wage for public servants increased by $800 yesterday with the promise to renegotiate further increases if the government generates greater revenue from natural resources.

John Pinder, Bahamas Public Service Union (BPSU) president, said there is a clause in the union’s new industrial agreement that will allow the union to request more money from the government in the event of commercial oil drilling or increased royalties from aragonite and salt mining.

BPSU officials signed the five-year agreement with the government after less than six months of negotiations, which Mr Pinder said was a record time.

Other key components of the agreement include fixed monthly hazard pay and risk allowance and increased pension benefits as a result of corrected National Insurance contributions.

Mr Pinder noted that the hazard pay and risk allowance will be terminated once the government’s health insurance scheme begins in 2016.

The agreement also mandates that performance appraisals are conducted by the end of each quarter of the calendar year, according to Mr Pinder, who said timely assessments will remove barriers to promotion opportunities.

He added that the union will now be consulted during promotion exercises in a bid to reduce inequality faced by Family Island workers.

Mr Pinder said: “We also were able to agree to open the salary scales to accommodate the two increments that persons will be receiving and also those who perform above average and are at the maximum of their salary scale, are still able to get a increment in the form of a lump sum payment.”

He added: “The general increase is for the minimum wage at this time. In 2016 the new budget year, is when the general increase will come for the entire public service when everybody will receive a double increment as an increase and that will be added to the base salary.”

Mr Pinder, who is also president of the National Congress of Trade Unions of the Bahamas, has called on the government to cancel a current aragonite production agreement and renegotiate new terms.

He forecast that if the government sought a new agreement, the public treasury stood to gain an estimated $4.2m in revenue.

Since then, Prime Minister Perry Christie has pledged a full review of the potential revenue associated with sustainable uses of the country’s natural resources, including sand, aragonite, aggregate and salt.

Mr Pinder said the union has reserved the right to negotiate further increases in pay for civil servants if royalties for the export of natural resources like aragonite are increased or if oil is struck in the Bahamas.

“With that in mind we believe that we ought to be able to come back to the table to be able to get what we asked for in the first place,” he said. “The government wasn’t able to do it because they said due to financial constraints – that’s the clause we have in our industrial agreement. If they do anything before 2018 to yield much more revenue from the national resources, we have the right to come to the table and ask for more for our members.”

I guess in essence you've just lowered the VAT rate for minimum wage workers to ~2%. That's a good thing, they can't afford any reductions with the rising food prices. But will VAT revenues be what you've expected? Since you've lowered the rate for the lowest earners should you offset by increasing the rate for the highest earners? Like the how-to-become-a-millionaire-in-2years-on-a-60,000-annual-salary cabinet ministers?

Smart thing to increase the pension benefits as well. The Titanic will sink now a bit faster.

Vell, I'm no economist and I dunno where they getting the money from, but minimum wage workers need some relief. I'm consistently shocked by the total at the register for a few items...they'll have to offset it somewhere...maybe if they cut down on their embezzling, over inflated contracts and "donations"

Albeit being an advocate of fair pay, the Government must now consequently cut down the work force and ensure people that get paid do work, are productive and bring the Bahamas forward.

Nothing said of the several thousands of temporary workers the PLP government taking on......... they are not P&P civil servants............ they have no long term pension benefits except NIB @ 65.

*AN increase in the national minimum wage is not up for consideration at the time, Finance Minister Michael Halkitis said yesterday.

Mr Halkitis said to his knowledge consultation with the private sector over a possible increase had not started.

His statements came after Labour Minister Shane Gibson said in June that the government will consider proposals for a “much-needed” national minimum wage increase by the end of this year.

Does the "Comades" xyz fool have the day off??? Could we be so lucky?

In the Bahamas this is still poverty wages with the high cost of living, good luck raising a family on that.. Wages are to far out of touch with cost. Cost must be addressed.

It is no wonder the civil service is so corrupt...How can anyone survive on $221.00 weekly?

There are wealthy powerful countries in the world where the vast majority of its ppl survive on far less than this........... India, China and Brazil for starters

and how are these ppl living?!. Wow, let us all not just live in more SHANTY towns then.

Yes Sheeprunner12, that is correct but a loaf of bread is not $5-6 dollars and a jar of peanut butter is not almost $8.00. in those countries. Nor do they have to deal with the inflating cost of housing, even a broke down house in the ghetto in Nassau run u $50000 to buy. Don't even think about adding electric and other utilities. Now factor food and clothing for yourself and kids. $11500 equals poverty. Many have older family members retired from Government work and u end up having to make up the difference financially.