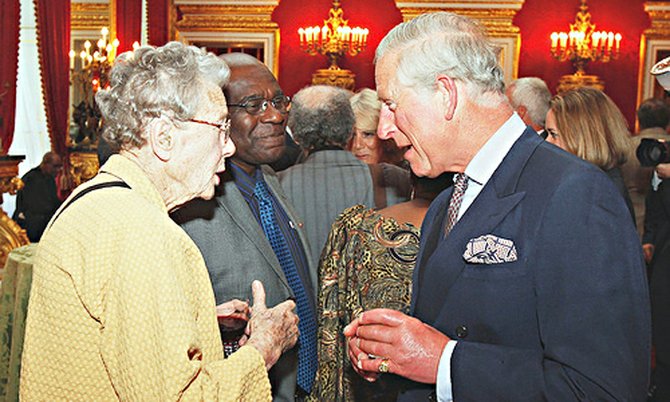 Mallie Lightbourn chats with the Prince of Wales – she was as interested in meeting a homeless man as she was in meeting Prince Charles, said Rev Richard Carter, Associate Vicar at St Martin-in-the Field.

MALLIE Lightbourn – mother of Michael, Richard (MP for Montagu) and Timothy – was not only a remarkable woman, but an extraordinary Bahamian.

She made her home in London 55 years ago, returning to Nassau for two months every Christmas to visit her family and friends. Her social calendar was filled while here. Every day was booked as she made it her business to see all her old friends, make new ones, and during the two months that she was here bring them all together at her various dinner parties of a meal cooked and served by herself. She didn’t like anyone to help her in the kitchen, nor was she particular about fancy place settings — the finishing touches that most women lose sleep over. What was important to Mallie was good conversation, a good meal and a wonderful evening with friends of all age groups and differing backgrounds.

“Mallie had the gift of hospitality,” wrote the Rev Richard Carter, Assistant Vicar at St Martin-in-the-Field on learning of her death. “More than anyone she loved to welcome guests from all walks of life, especially the young. The thing about those parties was you never knew who the other guests were going to be and it was always a surprise.”

“I first met Mallie on the pilgrimage to Canterbury,” said the vicar. “I had been told about her and that she was one of the St Martin’s legends. She loved the pilgrimage and never wanted to give up, continuing to walk with us even just after an operation for a pacemaker.”

When she came home, she regaled us with stories of those 157-mile walks from London to Canterbury — by then she was well into her eighties and still leading the charge. One night, dark came before the pilgrims had found a place to stay and so, with no place in the inn, Mallie bedded down on a tombstone in a graveyard. On another occasion, she nodded off on a vicar’s desk — Mallie had many stories. Told with vim and vigour, they were side splitting.

“She was generous, compassionate, brave and wonderfully independent,” recalled the vicar. “Most of all, she loved people and had the great gift of friendship. There was no side to Mallie, never believing she could give as much as she received, always expressing her gratitude for the kindness of others. She was a true Christian. She was as interested in meeting and talking to a homeless man at the Connection as she was in meeting Prince Charles, and she did both. It was not long before I was invited to one of her supper parties as many others have been.”

“Mallie,” said the vicar, “had the gift of making people feel special. Arriving as I had at St Martin-in-the-Field from the other side of the world she taught me so much about care and hospitality and I was fortunate enough to be a frequent guest not only by myself but she also invited my mother and any of my friends visiting from the Solomon Islands. This was Mallie’s way. And I know many of you will have shared this experience.

“She was the same wherever she went,” he recalled. “‘I met such a nice bus driver today,’ she told me. ‘I’d fallen over in the middle of the road, and he stopped his bus and helped me up and helped me find a place to sit down and made sure I was all right. Such a kind man. I do think people are wonderful.’

“Or,” the vicar continued, “when visiting her in hospital where her warmth and kindness to everyone seemed to light up the ward and immediately form a community: ‘There is such a nice young man in the bed over there,’ she told me, “I’ve invited him to supper as soon as he gets out of hospital.’

‘“Oh the poor lad has been shot in the knee cap by members of a gang,’ Mallie told me.

““Well I am not sure you should be inviting him to supper!’ I told her.

‘“Oh, he’s ever such a nice young man,’ she said. Mallie saw the good in people. She was also no push over; and could tell you in no uncertain way what was wrong too.”

But the most outstanding feature of Mallie was she was a Bahamian first — and she never let anyone forget that. She supported all of our Bahamian high commissioners posted to London, and went out of her way to attend their functions. Former Governor General Sir Arthur Foulkes, who was a high commissioner in London, will speak at her funeral mass at Christ Church Cathedral at 4pm on Thursday. Ed Bethel, current high commissioner, had this to say in a message from London to her family:

“I was saddened to learn of the death of your mother. It was my good fortune to meet Ms Mallie a year and a half ago when I took up my appointment as High Commissioner for The Bahamas to the Court of St James.

“Before she returned home, my contact with her was frequent. She radiated from her personality a charm and sweetness that will be etched in the memories of many. I know that the impression she left with me was a durable one. She was an inspiration on aging well and gracefully.

“She lives in our memory as a kind soul who was a participant in life.”

Another feature of Mallie was that she refused to tolerate racial prejudice.

Her younger son Tim recalled the story told him by the late Mrs Eva McPherson Williams. Mrs Williams said that she and Mrs Anna Bethel, members of the Queen Mary’s Needlework Guild during the second world war, produced more work than any of the other members for the men overseas. One day, Mallie noticed that the two women were always kept to the back. She guessed it was because of their colour. “She was furious,” Mrs Williams recalled, “and immediately insisted that we be brought to the front.”

That was Marion Elizabeth Lightbourn, a Bahamian, who loved her country and its people to the end.

On Sunday, two minutes’ silence was observed at St Martin-in-the- Fields, London, in memory of Mallie when the minister, Jeff Claxton, ended his sermon with the words of thanksgiving with which she started all of her dinners.

“In a world where many are hungry, we thank you for this food.

“In a world where many are lonely, we thank you for friends to share it with.

“In a world where many are without hope, we thank you for our Lord Jesus Christ.”