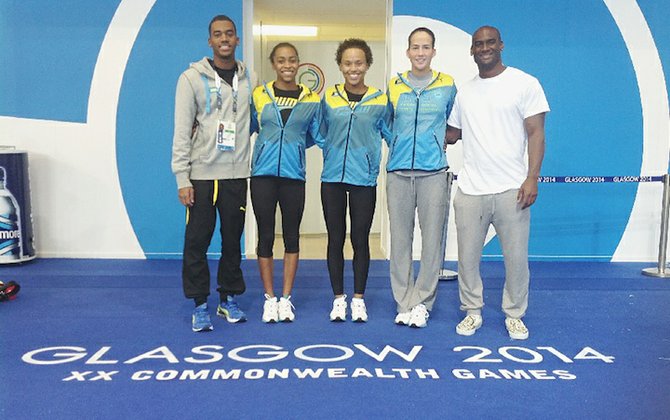 GLASGOW, Scotland — It’s the dream of every athlete to represent their country at one of the major international meets and eventually win a medal. What Arianna Vanderpool-Wallace will be doing today is something that only few athletes get to achieve in their lifetime.

Poised to lead the Bahamas’ five-member swimming team into competition Thursday in aquatics at the 20th Commonwealth Games, Vanderpool-Wallace will have the Commonwealth of the Bahamas in her hands when she carries the flag during the opening ceremonies.

It’s an historic moment for Vanderpool-Wallace, who will be the first female outside of track and field to have the honours at the prestigious four-year games that stands just behind the Olympic Games in prominence.

“It’s a really big honour. I mean I feel like sometimes track and field gets a lot of attention so it’s really nice that swimming is going to get the attention,” said Vanderpool-Wallace, who has earned the rights to be the flag bearer because of her distinguished career so far.

Although she was given the news before she got here, Vanderpool-Wallace said it’s slowly sinking in that she will be leading the Bahamas’ largest delegation ever to the games from six different disciplines - swimming (five), athletics (28), boxing (four), judo (two), cycling (five) and wrestling (one).

“It’s going to be an honour for me, but I also hope that one day I will also be the Olympic flag bearer,” she said. “But the Commonwealth Games is a very big event for the Bahamas and the world, so I am really honoured that I am carrying the flag.”

While the swimming competition will get splashing the day after on Thursday with Joanna Evans (women’s 200 metre freestyle), Elvis Burrows (men’s 50m butterfly) and Dustin Tynes (men’s 200m breastroke), all in the preliminary stages with the finals to follow in the evening, Vanderpool-Wallace will have some time to rest and soak it all in as the nation’s flag bearer.

The 24-year-old graduate of Auburn University, who is now competing as a professional, will brush off her cobwebs and get into the pool on Friday morning when she opens her three-event meet with team-mate Ariel Weech contesting the heats of the women’s 50m.

Vanderpool-Wallace, the multiple national record holder, is hoping to surpass her performance in the 2012 Olympic Games in London, England, where she became the first Bahamian to make it to a final, finishing eighth in her specialty in the 50m free.

Bahamas chef de mission Roy Colebrooke said there was another person on the team whom he felt deserved the opportunity to carry the flag.

“I believe the selection is a timely one, based on how she was competing and based on the way she showed leadership,” he said. “I believe we all as a country can stand proud and look up when she takes the flag. Her performances alone in the recent games dictate that she is worthy to carry the flag for the Bahamas at the Commonwealth Games.”

As a female too, Colebrooke said it goes along with the notion that not just an athlete from track and field, but also a female should be recognised for her outstanding performance in sports.

Vanderpool-Wallace has certainly paid her dues and is well deserving of such an honour.