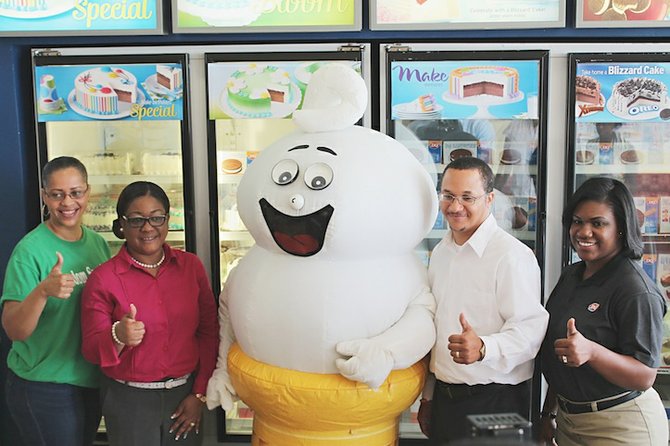 A BAHAMIAN father was pleasantly surprised as well as grateful upon receiving a phone call that his daughter, Zion Knowles, had been selected as the first ever recipient of Dairy Queen’s annual Miracle Treat Day.

Six-year-old Zion was diagnosed with leukaemia at age four in June 2012. Her father, Jason Knowles, said that the family has been appealing for donations from corporate and private entities since Zion’s insurance was exhausted within the first eight months of treatment.

Zion is currently receiving post bone marrow transplant treatment abroad after experiencing a relapse in May 2013. Her medication alone, Mr Knowles said, costs about $5,000 per month.

Deon Dunbar, marketing and human resource manager at Dairy Queen said Mr Knowles approached the company for assistance even before the Miracle Treat Day initiative to help children battling with illness in the Bahamas was launched.

While planning and preparing for the launch, she said they were grateful to show their support to Zion and her family.

“We thought, yes, this is a good year for us to get on board and carry out Miracle Treat Day and not put it off again. This was a way for us to give back, so we decided to identify Zion as a recipient and help her,” said Ms Dunbar.

She said this is an event that is held every year in the United States and Canada. The Bahamas’ version will take place on August 14 annually. Dairy Queen said it will donate $2 from every Blizzard Treat sold on that day to children suffering from conditions such as sickle cell disease and cancer.

“Dairy Queen on the whole, we have a list of charity work that we often do, such as Free Cone Day held in March, and now we are taking this on to be held once a year in August. The more money we raise, the more children we can help. Even though the world may still be in a recession and it is a reality, with other people joining and coming on board with us we can do so much more together. This is a start to something very positive and giving back to the community,” said Ms Dunbar.

Mr Knowles said he believes the initiative is a good idea because there are a lot of families like himself in the Bahamas that are in need of help with caring for their children who are suffering from illnesses and life-threatening diseases. He hopes that the rest of the corporate community in the Bahamas and other establishments will show their support and do their part in making a difference.

“In everything we give thanks and we just hope that people would be more aware of what is going on in their community as opposed to just giving it a glance and putting it aside. As little as it may seem to them, it is a lot to the families that are seeking assistance and help,” said Mr Knowles.

He said Zion is still receiving post transplant treatment and everything is going pretty good so far. However, he said there are a few complications here and there.

The family is also suffering due to their forced separation, as Zion’s mother, Ancilla Knowles, lives with her in Miami and her father has to constantly travel to and from Florida to be with them. Mr Knowles said his wife and daughter have been residing in Miami for the past two years.

“My wife had to give up her job basically to go over there and live with her, but we are just trying to do all we can to ensure that Zion gets the treatment that she needs. Apart from the financial part of it, dealing with the separation is difficult. With them being over there and the rest of the family being over here, that is a challenge. She hasn’t been able to attend school for two years. We just try to make the best of it and do what we can to just keep moving forward,” said Mr Knowles.