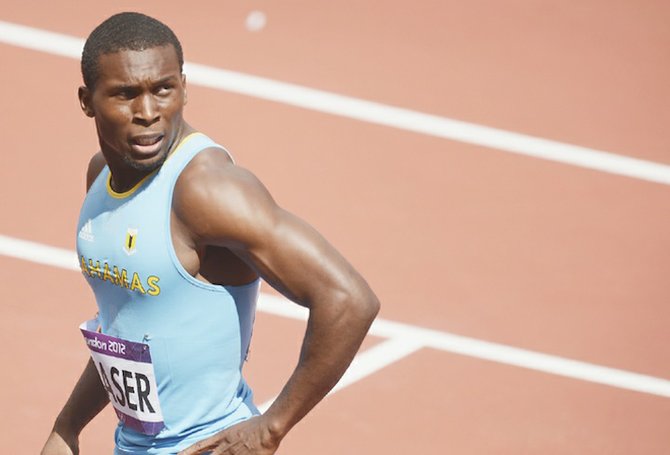 GLASGOW, Scotland — Warren Fraser, writing his own bit of history for the Bahamas, placed seventh in the men’s 100 metres final in the 20th Commonwealth Games on Monday night.

Fraser, the first man to make it to the games’ final in a sprint event since the late Thomas A Robinson did it in 1966 when he won a silver medal in the 100m in Kingston, Jamaica, was seventh in the race in 10.20 seconds as he provided a ray of hope for the future, along with Grand Bahamian Shavez Hart, a semifinalist in the event.

The last Bahamian to make it to a final in any of the major international meets was Derrick Atkins, the national record holder, who claimed the silver at the 2007 IAAF World Championships in Osaka, Japan.

“The Bahamian male sprinters haven’t been on the map in a while so it feels really good to be able to lead the field this time around,” said Fraser, who from the time he competed for Temple Christian Academy was always considered to be a pace-setter.

“God put me here for a reason and I am thankful for that. So it’s just moving forward from here. There’s no stopping me now. The sky is the limit for me.”

The only person who stopped Fraser was himself. He got out to a good start and was right in the pack for the first 50m. The last 50m was a different story as he got left behind going into the tape at the finish line.

Kemar Bailey-Cole of Jamaica stopped the clock in a season’s best of 11.00 for the gold. Adam Gemili of England broke up the anticipated Caribbean sweep by taking the silver in 10.10. The bronze went to Jamaican Nickel Ashmeade in 10.12.

“Coming out of the blocks, my reaction was a little delayed,” Fraser said. “I was thinking about executing and so I was trying to clear my mind. But if I had executed a better 30m it would have set up my race better.

“I’m used to getting out and maintaining, but it was a good experience for me, building up my confidence going into next year. Hopefully I can also get some more meets for the rest of the year.”

Without the big names from Jamaica, including Usain Bolt opting not to run in the straight-away race, the field was wide open and it showed in the semifinal.

Fraser, the 23-year-old Clemson University graduate, won his heat in 10.21 to advance to the final tied with the eighth and ninth spot respectively with Ashmeade. The fastest qualifier was Bailey-Cole in 10.00.

Hart, who won the Bahamas Association of Athletic Associations’ National Championship title over Fraser in June at the original Thomas A Robinson Stadium, ran 10.29 for seventh in his heat.

Apparently, Hart stumbled a bit as he got left in the blocks and wasn’t able to reel in the field away of him before he ran out of territory. It left him out of contention to join Fraser in what would have been another historic aspect to the final with two Bahamians entered.

“Not counting anybody out, but it took a well-executed race to get into this final,” Fraser said. “It wasn’t about the times, but it was who executed the best was able to get in. And in the final, it came down to a very technical race. The times were not that fast, but it was a race that called for total concentration. I just lost focus a bit in the race and it cost me.”

Fraser, however, can look back at the fact that he can be called a Commonwealth finalist - the first for the Bahamas in 48 years - over a span of 12 consecutive games.