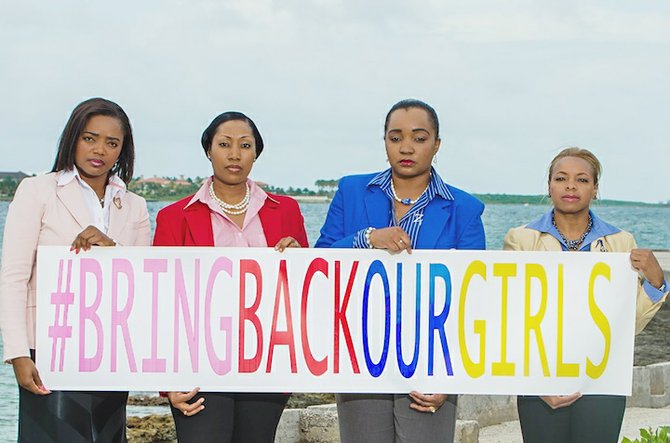 OVER the last few months, the hashtag “Bring Back Our Girls” has been trending worldwide on various social media outlets, including here in the Bahamas.

The hashtag has been used as a global outcry over the abduction of 284 schoolgirls kidnapped from the Government Secondary School Chibok in the state of Borno State, located in northeastern Nigeria.

The initial kidnapping of 276 girls, followed by additional kidnappings which have brought the number to more than 300 girls, has led to people around the world wanting to do their part in the rescue effort.

In a show of unified support for this growing global campaign, presidents of the local chapters of sororities here in Nassau – Alpha Kappa Alpha, Delta Sigma Theta, Zeta Phi Beta and Sigma Gamma Rho – joined hands in solidarity with their international organisations to say “bring back our girls”.

The women said they also stand with every person fighting against any form of human trafficking, abuse and violence against women and young girls.

Alana Ingraham, president of Eta Psi Omega Chapter of Alpha Kappa Alpha Sorority, said they decided to come together because they wanted to do something to help the cause.

“We have been called to action by our sororities, by our nation’s leaders and by our common interest to be of service to all mankind. While social media was buzzing with ‘#bringbackourgirls’, we wanted to come together, united for a common cause. It was more than the girls in Nigeria, but for all women and girls everywhere that are victims to violence, abuse and human trafficking,” said Alana.

While the campaign is a global one, Jeunesse Osadebay-Bullard, president of Nassau Bahamas Alumnae Chapter of Delta Sigma Theta Sorority, said the issue hits home for them as women, mothers, daughters and female leaders.

“We join hands to address this concern collectively as a unified body of women,” she said.

Tanya Woodside of the Kappa Delta Sigma Chapter of Sigma Gamma Rho Sorority said as representatives of international organisations and chapters they had to speak up on this issue.

She said this matter has garnered the world’s attention and brings to light other violent acts against girls and women that some people have never even heard of.

Contanza Adderley Bourne, first vice-president and programmes chair of Eta Psi Omega Chapter, Alpha Kappa Alpha Sorority, said initiatives that bring awareness to social issues facing women and empower women are not new for their organisations. However, she said they are currently discussing projects that unify the sororities and create awareness within the Bahamian public.

For D’Asante Beneby, social justice and human rights chair, human trafficking is the serious issue. She said it is something that is happening every day but not many understand that it is happening right around them, especially here in the Bahamas.

“It’s not something clearly understood or on the front page of newspapers like other crimes. This is why Alpha Kappa Alpha Sorority has mandated our chapters to bring awareness to these issues and to implement anti-trafficking initiatives to create awareness in our communities and support for those trafficked. The kidnapping in Nigeria has shed light on an issue happening to women and girls every minute, and the #bringbackourgirls movement, I believe, is just getting started,” said D’Asante.