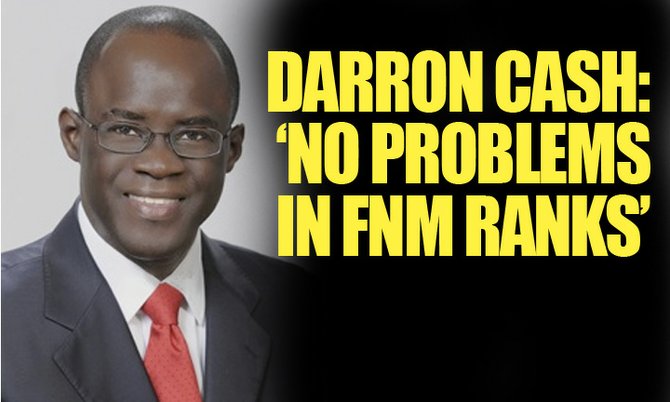 In light of Loretta Butler-Turner's suggestion that she is considering running for the FNM leadership, who do you think should lead the party?

However, Mr Cash stressed that there is no vacant position for leader in the party, despite at least two FNM members expressing interest in the post.

Speaking with reporters outside of Cabinet yesterday, Mr Cash said unlike the current government, the FNM welcomes challenges within the party – as long as a position is available.

“As chairman of the party my answer is very direct but there is no vacancy for the position of leader in the Free National Movement, but

unlike the PLP we are an organisation where people who are interested in running for leadership can state unequivocally that they have ambitions,” he said.

“Also for the record, ‘I am thinking about it, I am giving it consideration because people have been asking for it’ is tantamount in my book as chairman as ‘I am running for it’. But if it were the PLP, where they all know the leader is off his game, getting tired and ought to pack it up, no one has the courage to say they are interested in running because they know they will get their head sliced off before the first words even come out.”

When asked if the expected leadership bids have affected the harmony in the party, Mr Cash said it made the FNM stronger.

“We encourage the expression of differing points of view,” he said, “now is the time for us to be at odds and debate the issues and then when we become the government we will move in one accord. Not like the Christie administration that believes it is necessary for four or five ministers to say five different things. You can debate as much as you want until you get elected.”

During an interview with The Tribune, Mrs Butler-Turner said she has been inundated with support from people urging her to make a bid for FNM leader. She said while she has not made a decision on the matter, she has not ruled out the thought of challenging Dr Minnis.

“Quite frankly, I have been weighing my options recently,” she told The Tribune.

“I have not made any decision regarding it, but a lot of people have asked me about it so in that regard I would certainly give it consideration.”

“Like anybody else, I think we all evaluate if we can do more and if we can do something different and I think the only other post for me would then be a consideration of if I would challenge for leader,” the Long Island MP added. “While I haven’t made that decision, certainly I would not rule it out at this time.”

When asked to respond to Mrs Butler-Turner’s statements, he said: “I am focused on moving the party forward.”

A leadership race within the FNM is likely to occur at the party’s next convention.

According to the party’s constitution, a convention must be held every two years. The FNM’s last convention was in 2012.

Mrs Butler-Turner said it is still unclear when the party will hold another convention.

Nice spin and I like the idea, but honestly if Hubert Ingraham were still leader, nobody would be openly saying they're going to challenge him. So it's not a PLP thing "really", it's a personality thing. But for the record the challenge is good. Not good if it happens every day, but good at the appointed time. The PLP have a more muted and self destructive expression for their challenges, they simply do as they want and allow PGC to fall flat on his face at every opportunity.

Hasn’t May 26, 2012 come and gone? Comrade Daron since you talk lots about how others should be "respecting constitutional protections and rights granted by the Constitution," how can you now do a flip-fop? Let's examine more closely. You as the reds Chairman are quick to stress that there are no vacant position for leader in the party, despite at least two FNM members (Comrades Loretta and Dr. Duane) expressing interest in the post. Does not the your party's own constitution mandate that a convention of the membership of the red shirts be called every two years? Since the two years time period has NOW passed, wouldn't some be justified in stating that ALL positions of the officers of the party have now expired and if so, is it not a fact that you and all your party colleagues are acting without the approval of the party's mandated two years convention requirement? Suck it up cause you no longer hold any authority to speak as the Chairman of the red shirts. Comrade Daron as a Comrade who so respects the Constitution of your party , will you now do what is right ... step aside. if not, it should be 'grabbed' out of your hands, by your party's own red membership

How many republican candidates say they are running in America? No disturbance there. ( Of course except the whole Christie smear ).

Just like cash run on and on He was asked about his party leader ship. But he runs on about the PLP Leader ship. smoke and mirrors that is all he is about. Butler Turner wants to be leader and so does Dr. Sands. He knows that. So why all the double talk.. Try your best Mr. Cash to be honest and confront issues . He went out to the cabinet office to show off himself and he was confronted with questions that he was to ashamed to answer.,

Comrades is it being too presumptuous on my part to take it that the red shirts membership are just too damn dump on what their party's constitution calls for, or could it be when it comes right down to their red ranks, they just don't give a rat's ass what others think?

Anyone notice how no one in the FNM is speaking out anymore about the matters reported in the Punch about Bank of The Bahamas. This deal struck to keep this guy Cash out of hot water has resulted in the FNM losing its ability to speak out on any corruption matters involving BOB. What a political giveaway!

Reading material for all my red Comrades who will try say "It ain't so."

Like i keeps saying. I ain't making this stuff up. 'Tis for real!

Comrade Daron is responsible cause it's the "principal of the thing" to answer to his red shirts membership, not this Comrade, why this bunch of actors do not believe they are bound by their party's constitutionally mandated rule that the party's leadership MUST call a convention of the party WITHIN every two years? Regardless, there are no good reasons to break the rules. When Daron was asked by a member of the media, if his computer and phone HAD in fact been returned to him WITHIN a short period of time, why did he then proceed with his court action? Daron replied, it was the principle of the thing.