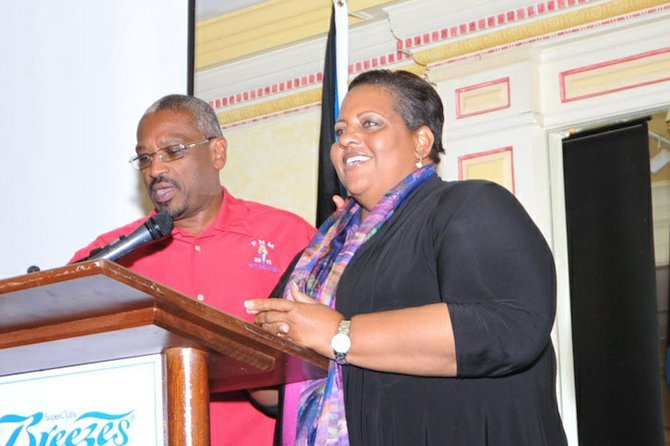 On Thursday, The Tribune published the results of the poll, which asked who readers thought should be the leader of the Free National Movement.

Loretta Butler Turner was in front with 47 per cent of the vote, with current party leader Dr Hubert Minnis second with 20 per cent. The rest of the votes went to Hubert Ingraham (15 per cent), Dr Duane Sands (eight per cent) and an “other” candidate (10 per cent).

But in the hours after publication of the story, there was a late flurry in voting from which Dr Minnis came out on top with 44 per cent, Mrs Butler-Turner second (36 per cent), Mr Ingraham (9 per cent), “other” (6 per cent) and Dr Sands (5 per cent).

Readers had mixed views in comments on the website.

“Sheeprunner12” said: “LBT is a tireless worker... charismatic engaging character... straight-talker and... pracitcal tactician. These are more than enough good traits to be an effective political leader... anywhere.”

“Well mudda take sic” said: “Butler nor Sands are suitable candidates to lead the FNM; both carry far too much unfavourable political baggage making them lightning rods for much divisiveness within the electorate and their own party.”

“Honestman” said: “The FNM needs to have a convention and decide who is the best candidate to lead them into the next election. I know these events cost money but the benefit of having one this year is that it would give the elected leader the chance to create some momentum and authority going into the polls in 2017.”

• Don’t miss your chance to join the conversation on tribune242.com.

Time reds parked that backwards in time flying machine that got them where they are today. Comrades considering that they all have the exact leaderships flaws, what difference will it make what a few exclusively red shirts say in some Tribune poll. I guess Minnis, Loretta, Daron and Dr. Duane think the beauty of them as executives leading the red shirts is that they don’t need possess courage when the reality is their dwindling support base have no interest in moving away from the past. Their reliance of thinking in the past means as leaders they are never going to be challenged to evolve and improve. My dear Comrade red shirts, this is the same team who despite the blunders of PM Christie have been totally useless in hijacking the political agenda with what should have been a slice of bread for them. Too many internal issues keep popping up in the media. Non consistency jumping from joining forces with the Miami-based Cuban Movement Group, dealing with the silly snatching of a laptop from hands, firing a senator within days of trouble on the horizon and hitchhiking on the backs of every public protest while they talk, talk and more talk. Changing from a YES Vote on the web shop referendum to a NO vote. Allowing Hubert to hijack both the Web Shop Referendum and the Cooper's Town By Election. How do you appeal to the many thousands of new voters coming on stream in 2017, retaining your party’s all-important, powerful block of voters with Haitian heritage? Both you MUST take with you into the 2017 polling stations. And, what does the leader do to mobilize the thousands of reds who walked away from Hubert with many spoiling their votes by going over to Bran’s Green team and will never return to the red tent, as long as Hubert’s return is being ignored, he takes the time machine to fly back in time up to Cooper’s Town to accept a new Senate appointment from the Hubert’s personal bench of voters rejects. I speak the truth.

Great six of one or half dozen of another. The poll does not really mean all that because the amount of voters are far to little. But in my opinion they are both great for the FNM. They are Both their Papa Ingraham's children.

Good. I am glad people did not vote Loretta as defacto leader simply because "she is there". I do not say this because I do not "like" her, I say that because I do not "know" her, and I should. We all should. This is not a popularity contest, actually I'm wrong, that in fact is exactly what is wrong with our politics, it is always a popularity contest and the man or woman who can most easily worm their way into your good graces is not necessarily the best, or even a, good leader. These people need to be tried, try their spirit to see WHO they are.

Can we please start demanding to see leadership qualities in our candidates before we hoist them on our shoulders up to the campaign stage??? Please? Ask hard questions about their principles and ethics investigate their work habits and character. What are their positions on key issues governing the country. What have they contributed. How have they reacted in tense situations? What is the state of their personal finances? Who are they associating with in their private life? What business interests do they have?