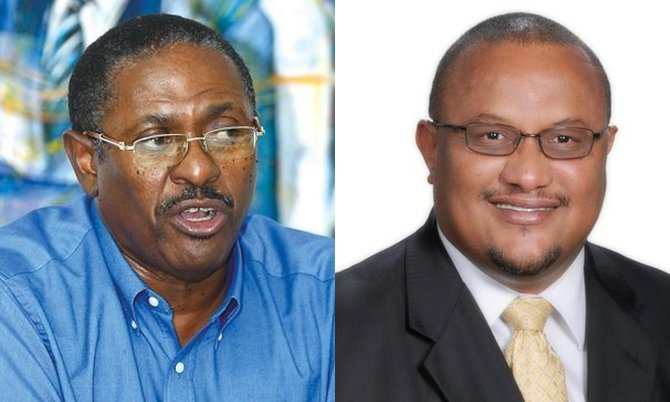 PLP chairman Bradley Roberts criticised Marco City MP Greg Moss yesterday for speaking “out of turn” when he said implementing value added tax “goes against the principles of the party”.

During his budget contribution in the House of Assembly last week, Mr Moss also said VAT will hurt rather than help the poor.

Mr Moss said the founding principle of the PLP is to protect the poor and vulnerable in the country and the implementation of VAT will “drive people further into poverty.”

When contacted for comment, Mr Roberts said while the PLP welcomes differing views, Mr Moss is “on a course that obviously only he is on”.

“The party went to great lengths to research VAT and explain to the Bahamian people why VAT is the best choice,” the PLP chairman said.

“The process started under the FNM but was pretty much imposed on us by an international agency. Greg Moss must not understand or was not paying attention,” he said.

“He is on a course all on his own. He expressed himself but he obviously did not understand what the facts (are) here. Maybe you should call him and ask him what he will support. What exactly is it that he is advocating? What is his alternative to VAT? If he does not support it then maybe he should tell the Bahamian people what he does support.”

“Mr Moss is right that Perry Christie has betrayed the best ideals of the PLP,” Mr Cash said in a statement released to The Tribune yesterday. “This is the only thing he was ‘ready’ to do from day one.

“Specifically with respect to VAT, Moss is right on point. VAT, and its accompanying wet blanket of double taxation, has the potential to - in Moss’s words - ‘drive people further into poverty.’ It is a sad testament to Perry Christie’s legacy as the father of the House that he seems not to care about what VAT will do to his own constituents. He seems out of touch and his own MP reminds us of this fact.”

During debate in the House on Wednesday night, Mr Moss reiterated concerns he has about the proposed new tax.

Mr Moss said: “It doesn’t benefit the country to take rich white people and replace them with rich black people. What benefits the country is to create opportunity, which is what the PLP has always been about – education, housing, lending, everything. That has always been the drive of the PLP, but to drive people further into poverty is not the role of our party, as I see it.”

He also said he would not support VAT and that the government should consider implementing income tax.

Earlier this year, Mr Moss said he believes the PLP will lose the next general election if they implemented VAT. He said it would be an affront to the PLP and a betrayal of the Bahamian people.

“Pass this and we will lose the next election”, he said. “We are at the point where we can see the cliff, but we can still turn around. This proposal is not who we are, we uplift people, this is unpatriotic and un-PLP. This is the FNM’s brainchild. We should not enact this.”

During his 2014/2015 budget communication, Prime Minister Perry Christie revealed the government has delayed VAT’s implementation from July 1 this year to January 1, 2015.

The government has also decided to introduce the tax at a broad rate of 7.5 per cent, instead of the initially proposed rate of 15 per cent.

The government has said it will expand its social safety net programme by as much as $30m to offset any negative effect VAT will have on the poor.

However, Mr Cash said the government must immediately explain how the safety net will work and how the funds will be allocated.

SOOOOOOOOO, the Party Chairman is the chief muzzler of freedom of speech?????

That's the way they roll!

To the Editor of The Tribune: Please update your file photos of Bradley Roberts; I saw him very recently and he now looks like the walking dead.

PLP have principles? All for me baby is a principle? Man if ya believe that I got a toll bridge to sell ya!

It's clear that the PLP cares nothing about the Bahamian people. Why would you impose such a tax on people when, things are already tough. You have MP's wanting a raise, Fred flying all about and new cars popping up everywhere with red plates. The hospitals and clinics have no fillings for cavities. The schools everywhere look like crap, and the parks look like jungles amdist communities.

I will not comment pertaining to whether any government cares truly for its people, but I agree these government facilities are looking deplorable. On the family islands in particular the schools are run down. They are located on hills near the ocean and not even fenced in. Also in 2014 teachers have rooms separated by a piece of sheetrock which does not extend to the ceiling. Thus it is incredibly hard to have two teachers teaching simultaneously. Let us not talk about the clinics which are also in need of repair, and are normally out of supplies such as birth control for those who wish to control their life by controlling their fertility. So MP's please don't speak about new government buildings for meetings, when schools that were damaged in fires have not been rebuilt or better yet, classes are now held in a lodge hall as the school roof was damaged last hurricane season. Government when you start to do your part, then maybe I can see why you need to highly tax me. By the way all of these schools and the clinic mentioned are in Eleuthera.

Daron and Greg, now there is a political match about give birth in the flaming belly of hell itself. Even the publisher of The Tribune will stick around watch that live birth. Papa wouldn't want miss it. Comrades how could readers have missed the juiciest part of The Tribune's story with none other than the reds Chairman Daron rushing to the defense of BTC's former Chairman Greg. but i seriously doubt Greg will stoop to believing anything coming out the red shirts tent, or will he? But let's not forget when back on January 27 2012 Greg felt it was important that he remind Bahamalanders of, how big a bunch of "liars" them reds are. In fact he had a long list of lies he presented as evidence. Comrade Greg needs reread not only his liars list but also some the many terrible things the red shirts said about him as the Chairman of BTC. i guess regardless what colour of shirt you're' wearing, anything goes in politics, if it can help to remove PM Christie as prime minister.

I have to laugh at most of the comments here - and on similar stories about VAT.

Perhaps Perry should come out and say "I've decided not to implement VAT even at the half-rate that I decided last month - because people just don't want to pay it and they just don't like it. Instead, in order to keep up with our balance of payments on international loans, I have instructed the Central Bank of the Bahamas to immediately change the exchange rate from 991/2% down to 85%. This will make up for the initial rate of VAT of 15%, and every 3 months the rate will decrease by 5 percentage points until it reaches 50% less than two years from now. At that time a US dollar will cost two Bahamian Dollars. Luckily for us at that time the Bahamian to US dollar ratio will still be 2:1 just like Barbados which is at least a lot better than Haiti at 44 to 1 and Jamaica at 110 to 1.

I am saddened that Bahamians by and large have chosen to remove their dollar from the PAR value that it has held with the US dollar all these years and instead pay more for US dollars (and hence everything that is imported) - but I respect the will of the people and I believe in democracy. May God bless the Commonwealth of the Bahamas."

Some of these comments needs to be deleted