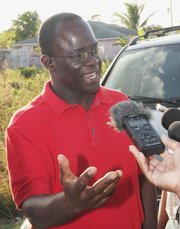 FREE National Movement Chairman Darron Cash said yesterday that his wife, Annette, is exploring every available legal option to challenge the basis for her “petty and frivolous” termination from the Bank of the Bahamas (BOB).

Calling the action against his wife “unjustified and a politically motivated witch hunt”, Mr Cash again raised questions of BOB’s ongoing operations which he claimed were mind-boggling. Several new allegations regarding BOB have surfaced and Mr Cash insisted that they would be revealed by his party in due course.

Mr Cash’s comments came in a statement to The Tribune in response to questions about speculation that Mrs Cash was preparing to sue BOB over claims of wrongful termination.

Last Monday, a memorandum was circulated to BOB staff, announcing that Mrs Cash, a human resources and training manager, was no longer employed with the bank. The memo, dated June 10, said the termination took effect on June 2.

“The basis of termination has nothing whatsoever to do with the leak of client or related information that The Punch has been carrying BOB to war over for the past year. And yes, I can confirm that my wife is exploring every available legal option for challenging the basis of this unjustified and politically motivated witch hunt and scapegoating exercise.”

He did not say what reason the bank gave for terminating Mrs Cash.

Mr Cash suggested that the relevant authorities needed to explain a number of developments which took place at BOB over the past few weeks.

He said that, in addition to his wife, BOB also fired another manager.

“What does it say about BOB and this government that the only persons who lost their jobs were (a senior manager)... and the manager for human resources whose husband happens to be the chairman of the FNM and an outspoken advocate for full investigations into the BOB allegations?

“It also boggles the mind that for a bank where the Prime Minister and Minister of Finance have argued that ‘all is well’ it has been almost an entire year after the bank’s financial year ended on June 30, 2013, and BOB has yet to announce the date for the bank’s annual general meeting,” Mr Cash noted.

“In that regard... why is it that having failed in its obligation to report to shareholders at an annual general meeting, the managing director can reportedly be on extended leave from the bank for weeks on end?”

Mrs Cash was suspended in May, reportedly pending the outcome of an ongoing investigation at BOB into leaks of confidential information.

Last month, Mr Cash said his wife never had any access to BOB’s client information and never divulged company information to him.

Mr Cash has repeatedly raised concerns about operations at the bank over the past few months.

The government released several statements earlier this year that said the bank’s position was secure. The statements came after The Punch published a series of reports that claimed loans were awarded based on political favouritism. The bank has said it will take legal action against The Punch.

In early May, police searched Mr Cash’s home and seized two laptops and a smartphone that belonged to him. The search and seizure was reportedly in connection with the investigation into leaks of sensitive information from BOB.

The items have been returned to Mr Cash.

Nothing but a head fake threat of legal action to try and take away attention from the Carl Bethel deal struck between Christie, the FNM (Minnis and Cash) and BOB. Meanwhile, it's business as usual at Christie's very own BOB, with the support of our National Insurance funds.

Leslie Miller never disputed the Punch's allegation that he is in arrears to the BOB for millions. McWeeney should have been fired as soon as the story broke. But they fired Mrs. cash. Crazy Leslie recently referred to the BEC union as "blood suckers". No Mr. Miller, it is the PLP who are the "blood suckers". The whole Cabinet isn't worth Hog Shit!

I hope Cash and his wife fight if they want..... but we don't care.....keep your business to yourself!!!!! If we want to talk about firing, lets talk about firing some of these politicians who don't have a clue that we want them to work to make things better, not just get in the papers spouting garbage out of their useless mouths!!!!!

One way to prove that his wife had nothing to do with the 'leaked' information, he was putting out there, is to continue in his quest to expose the bank for wrong doing etc. Am sure accuracy of his information was checked. If he was telling the truth, then an investigation should be carried out and whomever was found guilty of leaking the information should of course be fired.

Also, if it is revealed, that those in position knew about this, then they too should be fired. People this should not be about politics. We are beyond. This is a part of what keeps the country broken.

This raid was carried out without providing any substantive information as to reason. They also did not describe the manner by which they obtained Mr. Cash name to be suspect. Of all the days in between the event and now, they had not released any information as to why. Yet suddenly there was a search result produced. They have failed to provide complete answers to discovery and instead, they have chosen to stonewall, obfuscate, and finally provide only marginally satisfactory answers to the majority of discovery requests. These answers would only be comical if they were not defiant of the freedom of information act to be enforced and essential precepts of discovery. The incomplete and haphazard production by PLP is highly suspect and suggestive that they are withholding documents. The history of discovery misconduct overwhelmingly demonstrates this government’s bad faith. To ignore this is to ignore the requests to produce on all related matters and visa versa is expected. Production in waves violates the rights of the public. http://apps.americanbar.org/litigatio...">http://apps.americanbar.org/litigatio...

They were afraid of leaked information, a leak of what