'Jazz In Bloom' A Success A Second Time Around 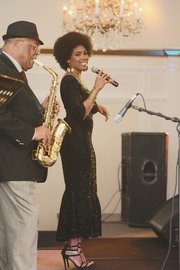 BAHAMIAN songbird Anuschka Wright believes in giving back to the community and supporting efforts that empower the youth through the creative arts.

For this reason, proceeds from the recently held second edition of Jazz In Bloom will be donated to initiatives that contribute to the preservation of the local musical culture.

The Jazz In Bloom concert was held on Father’s Day at the British Colonial Hilton. It brought together artists such Adrian D’Aguilar on bass, and from Los Angeles, Tina Raymond on drums and Dennis Hamm, on keys. Other vocalists who moved the crowd were Angel Reckley and Naomi Taylor.

“I am pleased with the outcome on the whole. Having been a part of the process, seeing where we came from and being able to see everything come together, gave me a great appreciation for what happened that night. I am proud of the product we presented and I am excited to see how we grow next year,” Anuschka told Tribune Arts and Entertainment.

“When I started planning the event last year, I had no expectation for its popularity. I was more concerned about the quality of the event itself and having as many people know about it as possible. I feel like the fact that it is now something people look forward to simply confirms that I have succeeded in my first two priorities.

Anuschka said she decided to contribute to those projects because each focuses on bringing out the best in youth through music, discipline and character building.

“The Accordion Project is held on Cat Island for two weeks during the summer and is taught in French. A master accordionist has to be brought in from France, as well as new accordions will be purchased; the children get to use them throughout the year,” she said.

The Accordion Project’s aim is to develop master accordionists in the Bahamas and to preserve native rake n’ scrape and other indigenous music while strengthening communities.

Mr D’Aguilar, of the Bahamas Jazz Project, teaches his students music theory and provides them with opportunities to perform in public so they can get adequate practice and learn the music industry at the same time. The Bahamas Jazz Projects requires funding at this time for new instruments and to help their young prot�g�s study abroad.

Anuschka said since the inception of the two projects, participants have been impacted in a significant way.

“The Accordion Project has already impacted children who attended the two-week workshop in Cat Island last year, because Ms Hamilton is a trained teacher (she is a French lecturer at the College of the Bahamas) and a recording artist, and has studied and lived in France most of her life before recently returning home to the Bahamas. She is recording and monitoring the progress of the participants, the impact it has on the families and the community at large. She found that most of the kids had no problems understanding instructions in French even though they did not speak the language. The kids also became more interested in finding out more about rake ‘n scrape and speaking French. The kids also got the support of the older generation who were happy to assist,” she said.

Anuschka said the kids in the Bahamas Jazz Project have formed a band called the “Jazz Cats” and have gotten opportunities to play for charities and other events. They also had the chance to play with seasoned jazz musicians, “which is helping them to become disciplined and focused as well as understand how the music business works”.

“I believe to whom much is given, much is required. Yes, many people poured into my life and there are so many brilliant kids out there who can achieve so much if just given the chance. We must support community-building programmes. One child steered in the right direction can do so much to positively impact the whole society,” she said.