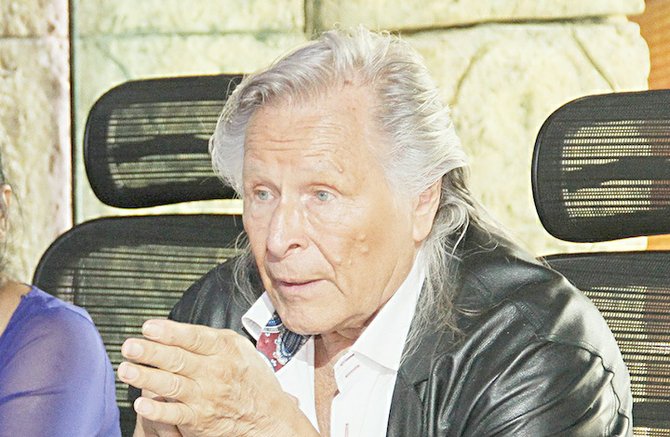 The documents, which have been assessed by Tribune Business, also show the Government was warned more than two decades ago about the potential damage that unregulated development by Mr Nygard and other Lyford Cay residents was having on the Bahamas’s reputation as an investment and second home destination.

A 1993 letter sent to then-Prime Minister Hubert Ingraham warned that many Lyford Cay owners were putting their homes up for sale as a result, with the Government told that “news spreads and people start to look for other destinations”.

The documents, taken from the Town Planning files, show that government officials have been aware of Mr Nygard’s unregulated, unpermitted activities at Nygard Cay for 15-20 years.

Yet the Canadian fashion multi-millionaire has seemingly been allowed to carry on without any interference, raising major questions about the seeming ‘impotence’ of the Government’s regulators to enforce the ‘rule of law’ and bring wealthy, politically-connected persons to heel.

The files, which were accessed as part of a government-commissioned report on activities at Nygard Cay, delivered on April 30, 2013, reveal:

“A summary violations and files dealing are enclosed for ease of reference,” wrote Audley Greaves for the Ministry of Finance’s permanent secretary.

It is unclear whether such a prosecution took place, but this appears unlikely given that Mr Nygard’s construction activities have continued apace ever since.

The Department of Physical Planning issued two warnings to Mr Nygard in summer 1998, ordering him to stop enclosing the seabed (Crown Land) and “correct the situation” - something the Nygard Cay owner promised to do.

Charles Zonicle, on behalf of the acting physical planning director, told Mr Nygard in a June 16, 1998, letter to “discontinue all work” on a groin until the regulators made a final decision.

And, in a July 3, 1998, letter, Michael Major, acting director of physical planning, told another Lyford Cay resident that Mr Nygard had been asked to “correct the situation”.

That, though, appeared not to have happened. An August 10, 1998, letter to Mr Major by the Lyford Cay Property Owners Association, summarising a meeting with him, said no permit had been issued yet Mr Nygard “has ignored government orders by continuing construction”.

Nygard Cay’s neighbours were “concerned and alarmed” back then about the erosion effects to their property, but Mr Nygard had assured them that his activities would improve the beaches.

“Yet, even after the extent of the erosion became apparent, and government officials ordered a halt to construction of the breakwater, Mr Nygard has continued with construction,” the Lyford Cay Property Owners Association wrote.

An August 24, 2000, memorandum from Michael Major, the now director of physical planning, to Audley Greaves in the Prime Minister’s Office, said of Nygard Cay: “Much of this activity is outside the scope of valid permits ...

‘You will find that some work has been completed in violation of provisions of the Town Planning Act and the Conservation and Protection of the Physical Landscape of the Bahamas Act.

“Subsequent inspections discovered additional work (excavation) completed on the northern coast without permission, and storage of debris on the southern coastline.”

The report, which warned that Mr Nygard’s activities had stopped the westward drift of sand to replenish neighbouring Lyford Cay properties, noted “another disturbing development”.

It said that the placement of rocks in wire cages under the water “is an apparent attempt to append Crown Land on the Clifton Bay side to Mr Nygard’s property, as has already been done on the ocean side”.

The report added: “in summary, the damaging activities by Mr Peter Nygard should be stopped immediately and recent activities reversed.”

The damaging consequences for the Bahamas, from the 15-20 year failure of the Government to enforce the law in the case of Mr Nygard, and similar projects, were highlighted by a July 26, 1993, letter sent to then-Prime Minister Ingraham by Glenn Franklin, managing partner of Land Design of Nassau.

He wrote on behalf of a client, Alfredo Cuomo, who purchased a property in Lyford Cay as a retirement home, and had already donated a collective $200,000 to the likes of the Elizabeth’s Children Home and Lyford Cay Scholarship Foundation.

“Several people, including Mr Cuomo, are so upset by the destruction of the natural shoreline in Clifton Bay and Simms Point that they have put their homes up for sale,” Mr Franklin wrote.

“It is no longer possible to walk the shoreline because individual property owners have had marine construction companies build huge groins or landfills from their property line out into the water.”

Mr Franklin added: “Mr Peter Nygard’s total disregard for the coastal environment has disfigured Simms Point, and it no longer retains its natural Bahamian beauty, plus a huge groin out into the water blocks public access to the beach/

“We understand from our client that Mrs Vicky McGrath could not stand it any longer, and the only way she could get away from this incredible destruction of nature was to sell her house for under market value.”

Tow other owners were also said to have put their homes up for sale as a result, and Mr Franklin added: “In frustration and anger, our client has put his house up for sale. Mr Cuomo wanted to retire here. Instead, he has given serious thought to pulling his investment out of the Bahamas ...

“As one European talks to another, news spreads, and people start to look for other destinations. Presently, our clients, as well as other Italians, are researching land investment opportunities in Cuba.”

Warning back in 1993 that Bahamians were also losing access to the shoreline, Mr Franklin concluded thus: “How many foreigners will continue to invest in expensive property if irresponsible people can build structures that will destroy other people’s treasured beachfront amenities?

“How much beach will be left where future Bahamians can stroll in the light of an evening sunset?”

Can't we just get this scumbag out of our country?

As shameful as it may seem.... we must remember that behind closed doors many Bahamians are willing to sell their soul, sell our country, and their backside for money. Nygard is cognizant of this fact and continues to exploit it. Whenever some controversy arises concerning Peter Nygard, he knows that all he has to do is pay off the right people. Don't be upset with him. Instead, we need to be upset with our corrupt political leaders who foster his actions and status in this country.

Surprise, surprise. I think not. Bahamians are again getting another glimpse of what really goes on in their country. But not to worry. Business as usual I presume.

Once again the POLITICAL CLASS has bungied The Bahamian People, anyone see a trend here? If Broke Q Public tried this he would of been in major problems but he is broke and Nygard has MONEY!

Can I give Hubert the first lash??? I only need one lick ta peel da skin off e back!

Let the one who is without sin (fault) cast the first lash..and that certainly aint you! arsenic

Actually Mr. Ingraham did start the legal process to force Mr. Nygard to restore all of his illegal depredations. He wrote a legally binding, cease, desist and restore order, which Mr. Nygard was dragging through the courts The current government has "shelved" those lawful orders and the current A.G. has simply ignored and refused to enforce them. Let's get our facts straight.

Comrades we should be thanking Comrade Peter, for he might just be the energizing force we Bahamalanders need as a peoples, to forever collapse the many disruptions of the Christie and Papa era.

The minister of crocked handshakes prevails

That photograph cannot be Peter Nygard. Those stem cell shots he is famous for taking in front of video cameras are supposed to be making him grow younger.

I mean that looks like a still shot of the portrait of Dorian Gray.

Nygard has endeared himself to the sports community, Junkanoo community and the scumbag politicians................ so he is well placed and he has a lot of "loyal" supporters ........... However, what is his relationship with the Lyford Cay homeowners'/Club members??? They have a lot of clout in our economy and global environment. We need to weigh the impact.

Let's be honest about this character, he's white (don't kid yourself it DOES matter to these political impersonators inferior mentality) rich! Very influential, business savvy and may have incriminating 'dirt' or 'dutt' (your preference) on many of our leaders, political, religious or otherwise. However, from a religious or biblical perspective he's an idolater a whore-monger etc, however when you have politicians and religious leaders begging for his money, and in return 'cover' him and protect him like many of The Rt. Rev. Dr. of the Bahamas, and the Min. this and Hon. That, what do you expect? My Grandmother (Bless her heart) once told me, " Boy you are judged by the company ya keep!" Hmmm I rest my case...

White or rich has nothing to do with it and nobody seems to have problem with money he's donated to our people over the years.

Bahamians are a proud group and "generalcrazy" says slaves support Peter Nygard? That's just wrong. He has helped create an amazing life for many people. Employment, donations and so much more. We should be so lucky to call him our friend.