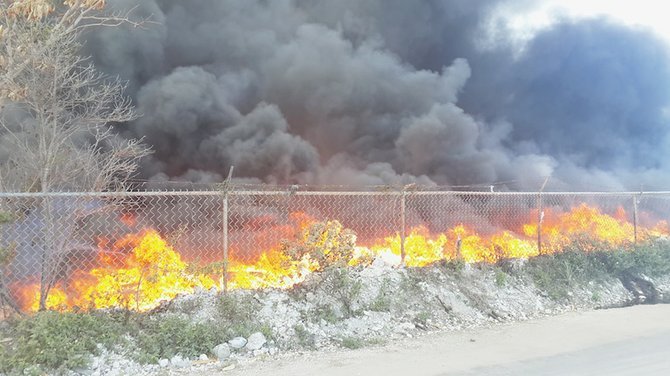 Pictured is one of the latest dump fires.

A well-known Bahamian waste services provider yesterday said it was “amazing” that no details surrounding the New Providence landfill’s takeover by a private company had been supplied to the industry, describing the entire saga as “odd”.

Waste Not’s principal, Ginny McKinney, in an e-mailed response to Tribune Business inquiries, said it was strange that Renew Bahamas appeared to have taken over management of the Tonique Williams-Darling Highway-based facility before all parties were ready and the terms of its contract with the Government fully understood.

Emphasising that she was speaking for herself, and not anyone else in the waste industry, Ms McKinney again took aim at the seeming lack of transparency that has surrounded the Government’s entire dealings with Renew Bahamas.

She contrasted the failure to disclose Renew Bahamas and the Government’s plans for the landfill with the 240-page proposal that the Bahamas Renewable Energy Resources (BRER) group, of which Waste Not was part, submitted to the Government in April 2013 on how it would operate and manage the landfill.

And Ms McKInney also agreed that the landfill was an environmental and safety (fire) hazard waiting to happen given the current inoperability of heavy equipment, disclosing to Tribune Business that Waste Not’s landfill office had suffered a “huge increase in flies and odour in the past month”.

“When you look at the timeline of this whole saga, the fact that the Minister is saying that Renew Bahamas started before they were ready is odd,” Ms McKinney told this newspaper.

Kenred Dorsett, minister of the environment, last week issued a press statement confirming that despite Renew Bahamas taking over management of the landfill ahead of schedule, the Government was still responsible for providing the fuel needed to operate the heavy equipment.

This it had not done, and Mr Dorsett admitted that as a result “the needed heavy equipment used for clearing, covering and maintaining the landfill were not operational”. He is now speaking to the Ministry of Finance to get the necessary funds released.

All of which indicates that the landfill takeover, and transition to private sector management, has been rushed and botched.

Sticking a pin in right there,” Ms McKinney told Tribune Business, “it seems very strange that a deal that was seemingly struck 13 months ago did not have a start date that coincided with their [Renew Bahamas] financing.

“Why the ‘early takeover’? At this point there are no raging fires, and the landfill was being regularly ‘groomed and maintained’ by the Department of Environmental Health Services (DEHS). I venture to say this was the planned date, and something else has gone awry. Why not continue with the DEHS until their [Renew Bahamas] financing is in place?”

Ms McKinney also queried Mr Dorsett’s suggestion that the public-private partnership with Renew Bahamas had already proven beneficial, specifically his comments on greater security at the landfill and the assertion that the new operator had already extinguished two fires swiftly - and at no cost - to the Government.

“If they have only just taken over, why is he claiming they have already put out two fires?” Ms MkKinney questioned. “That must have been on the Government’s nickel (as in fuel and fill). You need the heavy equipment to extinguish landfill fires, and half the methodology is smothering the fire with fill.

“The other approach is spraying water, which again involves Government resources in the form of the Fire Service.”

And she added that while the increased security had reduced the likelihood of fires, she warned that might have unintended consequences for the livelihoods of some Bahamians.

“By barring small scrappers from making a living from the landfill you have the same problem as when BTC took all those phone card vendors off the road; a whole group of persons are now without an income, possibly leading too more crime,” Ms McKinney said.

“That all comes at an increased cost to the Government purse as well as us the populace. In our proposal we were intending to include this informal network, allowing them to continue their scrapping in a controlled area. This didn’t infringe on our finances since we hadn’t included the metal as part of our business plan.”

Concerns over a lack of transparency, and the Government’s failure to put the New Providence landfill contract out to public tender via a Request for Proposal (RFP), continue to dog the process.

While there is no suggestion that Renew Bahamas has done anything wrong, or is not competent to do what is necessary, questions will likely linger over whether better offers and proposals could have been solicited.

And, given that Tribune Business has seen documents showing that Renew Bahamas is 60 per cent majority foreign-owned, its selection over 100 per cent Bahamian-owned groups also appears at odds with the Christie administration’s election campaign pledge to ‘put Bahamians first’.

BRER’s proposal called for it to be a 100 per cent Bahamian-owned public company, with 30 per cent held by the waste companies and the remaining 70 per cent split between the Government and public investors.

Ms McKinney added: “We also would have used expertise from away to get up and running, with a gradual transfer of knowledge to Bahamians, so we transitioned the company to majority Bahamian personnel.

“It has always been my belief that we can and should aspire to own these entities ourselves, utilising foreign expertise and labour when the situation demands it, but working to educate our youth that these positions are ones they should be prepared to fill.”

“We submitted our updated Landfill Management Proposal in April 2013,” Ms McKinney recalled of the BRER group. “Then, after agitating for some answers, we were granted an appointment in June 2013 with the Minister, during which he indicated (but gave no names) that the contract had been given to someone else.

“Unhappy but respectful, we waited another three months until, like everybody else, we heard the Minister allude to Renew Bahamas during an interview with Darold Miller (again no details) on Guardian Radio.

“Another nine months and many fires later we are told through the grapevine (no announcement or details) they have finally removed everyone (DEHS employees)out of the landfill and moved Renew Bahamas employees in.”

The Government previously said it negotiated a five-year joint venture agreement with Renew Bahamas, which involves the latter conducting landfill remediation and environmental management, plus an analysis of waste streams.

And the deal also involves the manufacturing of recycled materials into finished products, with the proceeds to be split 50/50 between the Government and Renew Bahamas. The latter, as revealed by Tribune Business, has already applied to receive tax breaks and other concessions on this activity under the Industries Encouragement Act.

Ms McKinney, though, expressed concern that Renew Bahamas’ need for recyclable material from the landfill might conflict with her ‘Cans for Kids’ initiative.

“It still amazes me that we have had no details, not even us, the waste haulers, whose livelihood involves the landfill,” Ms McKinney told Tribune Business. “As the operator of Cans for Kids, I am also needing information as to how this new entity will affect Cans for Kids (the aluminium can recycling that raises funds for kids).

“If they are so reliant on the metals and other wastes to raise funds, this would have a huge impact on us. We have already passed a letter on to them, and that was a saga in and of itself, as no one had a contact name (not even DEHS), and no one wanted to pass any information on, saying they had had to sign an NDA (non-disclosure agreement).

“Eventually I turned up again (fifth or sixth time) at the landfill and, hearing voices coming from the board room, knocked and voila, an English-sounding guy opened the door and I gave the letter into his hand after he confirmed he was with Renew Bahamas. I have, after three weeks, received an e-mail from a girls who says they will contact us after their mobilisation is finished.”

Ms McKinney added: “When I consider the depth of detail that accompanied our proposal (240 pages), which explained everything but the price of fish in the marketplace, I cannot understand how these guys and the Government cannot or will not tell us their plans.

“If it is a plan that has met with the approval of intelligent and honourable men and women, then release the details and let us all understand what is in store for the haulers, the scrappers, Cans for Kids, recycling and the populace in general. Where’s a Freedom of Information Act when you need one?”

Mr Dorsett previously said the Government elected not to go with the BRER group because it tied the landfill management to a waste-to-energy plant’s development, a direction it did not want to move in yet.

Yet Ms McKinney denied this, saying the group had put together a staged offer, and was willing to meet whatever the Government’s requirements were.

The company also appears to have a link to one of the British Colonial Hilton’s owners. One of Renew Bahamas’ two listed directors is Gerhard Beukes, a former investment manager at Adurion Capital, the boutique investment house that is one of the downtown resort’s two shareholders.

Renew Bahamas was formed on July 16, and registered on September 13, 2012, by Davis & Company, which became its initial registered office. Documents show the attorney that registered Renew Bahamas as a domestic company was Philip McKenzie, a partner in Davis & Co.

There is nothing to suggest that the Deputy Prime Minister had any involvement with Renew Bahamas’ registration, as he has given up day-to-day involvement in his law firm. The paper trail seen by Tribune Business shows that Renew Bahamas switched its registered office from Davis & Co to the McKinney, Turner & Company law firm on February 6, 2013.

The Companies Registry files list two directors, Mr Beukes and Een Colebrooke, who appears to be a Bahamian. Mr Beukes is now an executive with London-based Aubaine Capital, a boutique investment/finance house that was spun-off from Adurion via management buyout in 2011.

Apart from touting its investment in the British Colonial Hilton (which it and its Canadian pension fund partner, the Canadian Commercial Workers Industry Pension Plan, have been trying to sell), Aubaine’s website lists another of its holdings as ITI Energy.

This is described as a manufacturer of a gasification system that is “particularly suited” to the conversion of household waste typically found in landfills, transforming this into fuel that can drive combustion engines and produce energy.

Mr Beukes is a non-executive director of ITI Energy, whose three projects to-date are all based in the UK.

His connections to ITI Energy, and the company’s technology and applications, are likely to fuel concerns among rival groups that Renew Bahamas may also have a ‘lock’ on the future development of a waste-to-energy plant at the landfill.

Apart from its registered address, Renew Bahamas does not yet appear to have a website, head office or any trappings associated with a physical corporate presence.

In every deal like that the golden rule is "show me the money". Seems to me the money changed hands, but the fact that there is no money left to purchase fuel to run the machinery, says it all. "Odd" is a very civilized word to be used in this context.

THAT LITTLE POODLE BRAVE DAVIS AND HIS BUSINESS CRONIES ARE BEHIND ALL OF THE DEAL MAKING AND CONFLICTS OF INTEREST INVOLVING RENEW BAHAMAS. THAT'S ALL ONE NEEDS TO KNOW IN ORDER TO KNOW THAT THE DUMP WILL CONTINUE TO BLAZE BUT NOW AT MUCH GREATER COST TO OUR PUBLIC TREASURY!!