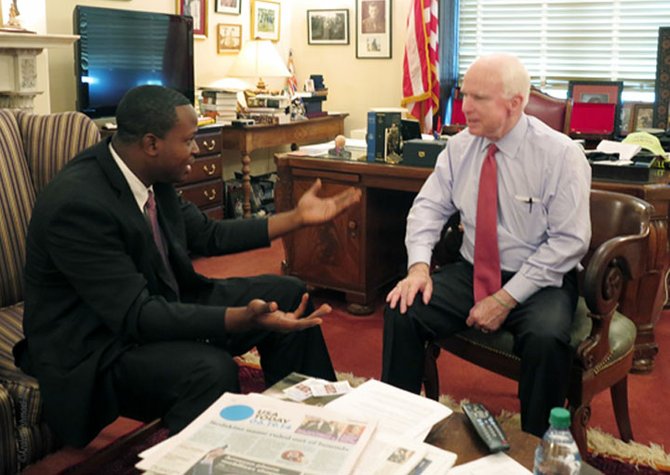 Mr Rolle, aka The Celebrity Artist and The Tribune’s cartoonist, is discussing plans to have his work featured at a major show in Phoenix, Arizona, after the success of his latest commission.

Mr Rolle was in Washington at the weekend to visit Senator John McCain, three weeks after presenting him and his wife with two customised portraits at the Ocean Club Resort, Paradise Island.

The special invite was arranged to coincide when Mr Rolle was expected to be at the opening of the Consular General Annex of the Bahamian Embassy, where he has new paintings hanging.

“I was pleased with being invited to sit with Senator John McCain in Washington DC in his Senate office,” Mr Rolle said. “He told me he placed his portrait in his State office in Phoenix, Arizona, for many more persons to see. We talked formally and personally about many endeavours; we planned to have a international art show in Phoenix, Arizona, where the event will be under his patronage to have other influential figures to preview a series of my art collection.

“Senator McCain continued to compliment me on the portrait I did with he and his wife (Cindy), along with making reference to the portrait I did with Pope Francis. He said that I know how to capture the soul of the figure I am drawing and that he looks forward to working with me in the future on many projects because he loves to support great talent.”

“It is a great position to be in, pertaining to the company I have been afforded, but at the same time I don’t take it for granted that God has blessed me with this talent to connect to the world. I look forward to continue to represent my country and family in the best way I can to be a example that visions of dreams can become reality.”

Mr. Rolle you make us so very proud. God has blessed you abundantly with this great talent. may he continue to bless you all the days of your life.

Congratulations to you sir and I wish you continued success.