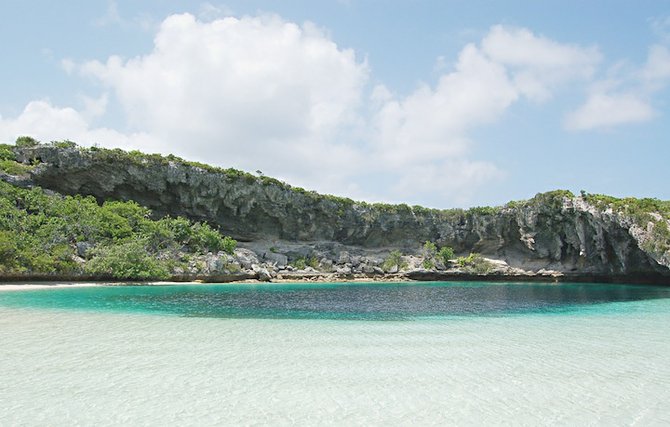 Deputy FNM leader Loretta Butler-Turner yesterday urged the government to “get serious” about the preservation of the country’s national treasures as the iconic Dean’s Blue Hole continues to be listed for sale by a US Realtor.

Mrs Butler-Turner who is also the Member of Parliament for Long Island, told The Tribune she strongly doubted that the government had taken any steps to ensure the blue hole remained in the hands of the Bahamian people.

Her words come despite a vow from Minister of Tourism Obie Wilchcombe last year in Parliament that the natural wonder would remain the property of the Bahamas.

Yesterday, Mr Wilchcombe reiterated the government’s position saying: “It’s not going to be sold. The government will not allow that to happen. She is well aware that the government controls any potential sale. I have said it before and I will say it again, it will not be sold to anyone.”

However the breathtaking blue hole remains listed as part of a sale of land being offered by ‘The Agency’, which is a full-service, luxury real estate brokerage and lifestyle company. According to The Tribune’s records, the for-sale property, value at several million dollars, extends out to the beach and the edges of the cliffs surrounding the blue hole.

Mrs Butler-Turner said, “The government made a commitment when this issue first appeared that they would ensure that it stays in the hands of the Bahamian people. They keep telling me what they are going to do in Long Island, but I think that all they are doing is seeking out the PLPs down there and giving them jobs.

“With Dean’s Blue Hole, what they’ve said is just talk. And where are they going to get the money to ensure that it stays in the hands of Bahamians? Maybe there would have to be an exchange of land. But at this point I don’t think this government is serious about it.”

While blue holes attract mass attention worldwide, Dean’s Blue Hole attracts special attention because it has been measured as the deepest blue hole in the world. The Vertical Blue free dive competition is held annually at the site.

And it was for that reason Mr Wilchcombe said it was too valuable of an asset to lose.

“If it is owned by someone or land in the immediate area we have to see how best to keep it in the hands of the Bahamian people,” he said. “We have to make sure that does not leave our treasury. It’s a treasure,” he said to The Tribune last year.

Currently, the blue hole and its beach and diving cliffs can be accessed by anyone wanting to visit the site. However, there are fears that could change if the property is acquired by private interest.

Efforts to reach the listing company were unsuccessful up to press time last night.

They are selling our blue holes now? Damn, I didnt even know a US Realtor owned it. How much more of these secret dealings will be revealed? No wonder there is a blind eye to FOI. They might as well let anyone come here and do as they please, this is really a pirate town where anything goes. Next our beaches, palm trees, and Bahamian way of life will be sold if a Realtor does not already own these things.

Most of our islands' coastlines are now owned by non Bahamians. We will soon be coralled like native Americans

Yep, but coastlines or not, Blue Holes are natural wonders of the world and the Bahamas is regarded as the Blue Hole Hotspot, any coastline that has a blue hole should not be sold or even thought of as for sale.

The hole itself is not for sale, it is the land adjacent to the blue hole. however, if the potential buyer is told in the sales pitch that he is buying all he sees including the sea, which is what often happens, it could be jeopardized. After all, if those Lyford Cay peeps can add land and fill in/dredge whatever they want......

The blue hole is surrounded by land on three sides that can be sold...... foreigners who buy land do believe that they can own the sea adjacent to the land.......... just look around

Too bad Loretta Butler's party did not make appropriate Laws to prevent this while they were in power.

Don't worry about that. Long Islanders will form a chain round that blue hole and see what foreigner will come and take that. Don't forget, they don't tolerate foreigners illegally or taking ownership of their birthright on that island.