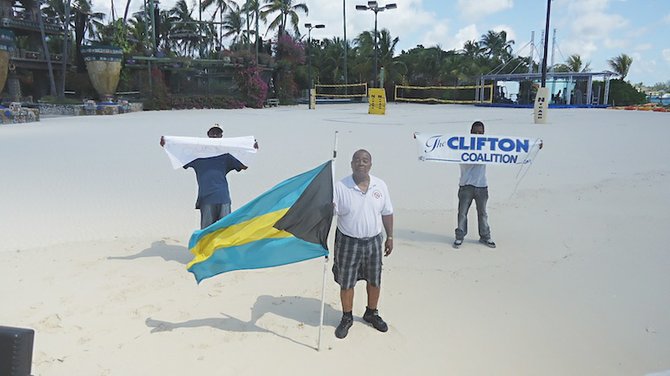 REV Dr CB Moss led members of the Coalition to Save Clifton to Simms Point/Nygard Cay as the group continued its crusade to create a protected Clifton Sea Park.

According to a press release from the organisation, the group visited the Clifton Bay area by boat to draw up its vision for the boundaries of the proposed park and to “reclaim the Crown Land at Simms Point/Nygard Cay in the name of the Bahamian people”.

The Coalition’s visit to the area comes after repeatedly expressing its desire for a sea park to be established, extending the protection that the Clifton Heritage National Park currently offers on land to the corals and other marine resources in the Bay.

Following the tour of the Bay, Coalition members went onto the beach where Rev Moss and his team “proudly planted the Bahamian Flag, claiming ownership of the Crown land in the name of the Bahamian people,” according to the press statement.

“While the beach up to the high tide line is public, as is the case with all coastal land in The Bahamas, the claim on this part of the beach at Simms Point/Nygard Cay is further strongly supported as it was artificially created by man from the sea and is therefore Crown land,” Rev Moss said.

The area has been the site of much legal controversy in recent years and Rev Moss has continually voiced concerns about ecological implications on the proposed sea park from the dredging and construction that has gone on in the Simms Point area as land was reclaimed from the sea and the beach artificially extended.

“In 2010, the Government of The Bahamas ordered that this area be returned to its natural state and that the artificial beach be dismantled,” he said, adding: “We are willing to assist with this action and look forward to the restored area being included within the park.”

Rev Moss said that if it is discovered that “the artificially created beach” is not causing harm to the surrounding area, he is willing to consider altering his position on the need to dismantle the created beach. But until that time, the Coalition is holding firm to its stance that the beach needs to be restored as a key marine habitat, he said.

According to the press statement, the Coalition will share its vision for the sea park with the Government.

It continued: “Together the Clifton Heritage National Park and the Sea Park will represent a huge step forward to protecting the natural resources of the Bahamas for future generations of Bahamians to enjoy.

“During our tour, we were able to establish reasonable boundaries for the sea park that will provide for the use and benefit of the Bahamian people for generations to come,”  Rev Moss said. “The Coalition plans to announce proposed programmes for the ongoing use of the Sea Park soon to make the dream of Bahamians using the park a reality.”

Comrade preacherman not exactly clear what you're up to but ALL beaches anywhere across our Bahamaland done belongs to only the peoples of Bahamaland. Back in the day they put locks on gates to lockout Freeporter's from gaining their rightful access to public beaches, and you know what the Freeport's did with them padlocks, they cut the suckers off. Preacherman go back and treat our flag with the respect she deserves, erect a "permanent flag pole" and fly her beauty high and proudly, not stuck in some sand like someone just drop it on beach.. Then dare anyone, be they foreigner or Bahamalander, to remove we Bahamaland flag, from the people's public beach. Beaches are for the enjoyment of the public, our tourists and residents, not for the wealthy amongst us to be entertaining their family and friends.

Tal is right. And that is why I say to every Bahamian with a boat in Nassau to go to Nygard Cay when you feel like beaching. Nygard Cay should be full of boaters every weekend. If we can't get him to obey our laws then let's antagonize the crap out of him and his illegal resort guests....

Comrade if they put up gates to lock the public out from gaining free access to "peoples beaches," do like they did in Freeport, cut the suckers off. The actually did cut the locks off the gates in Freeport.