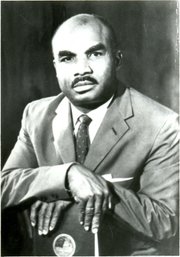 CARLTON Francis, the former Development and Finance Minister, who objected to the government plan to take over the casinos in the Bahamas on moral grounds.

THE decision by the government to disregard the vote against legalising the numbers industry in The Bahamas sets a dangerous precedent and is a move that can ultimately imperil our democracy, Majority Rule era MP Ed Moxey told The Tribune.

The government’s decision to ignore the result of the vote is so serious, Mr Moxey said, that the Opposition should be calling for the resignation of Prime Minister Perry Christie.

Mr Moxey was referring to an announcement last Wednesday by Minister responsible for Gaming, Obie Wilchcombe, that the government intends to bring legislation to regularise web-shops to Parliament.

Mr Wilchcombe said he hopes the legislation will be effective from July 1.

This is despite the fact that a national referendum on web-shop gaming in January 2013 resulted in a majority vote against such a move, but the debate has continued.

“I see this as a destructive move. What they are doing is not honouring the wishes of the people. That is fundamental to democracy,” Mr Moxey said.

He said that he was surprised the government was treating the matter so lightly and that the citizenry was not more outraged by the decision.

“The fact is I am amazed that we are so passive in this situation. They are, the members of the government and minister of tourism is treating it so lightly the minute that this was mentioned there should have been a hue and cry for their resignation.

“You can’t do that in a civilised democracy. It is an uncivilised thing to do. When parliament opens on Thursday, there should be a call for the resignation of the Prime Minister,” Mr Moxey said.

The last time there was sweeping changes to the gaming laws in The Bahamas, Mr Moxey was a sitting MP and the issue had sharply divided the members of the ruling party as it has today.

On December 12, 1973, there was a serious rift within the PLP and the Government over Casino operations and ownership in The Bahamas.

Former Development and Finance Minister, the late Carlton Francis, who was also an ordained minister in the Baptist Church, was opposed as a matter of conscience to the introduction of casino gambling in The Bahamas.

Mr Moxey said that during the 1967 general election the PLP waged a vicious campaign against Casino gambling and the UBP’s involvement in the industry and, according to the PLP, their alleged partnership with certain mafia bosses.

“It was unthinkable to many of us that the government would want to form a partnership with the mafia group that we campaigned so vehemently against after winning the Government,” Mr Moxey said.

But that was not Mr Francis’ objection. His aversion to the government’s plan to take over the casinos in the Bahamas was based on moral grounds.

Mr Francis, who was a member of The Baptist Convention, said that his objection was a matter of conscience and that there was a clear divergence between his principles and political considerations.

“Leaving conscience aside, I would like to raise the point that we are a young nation. We have not yet found a national identity. I feel that the White Paper (on Independence) and the Speech from the Throne put before us certain ideals and qualities that I would like to see in a young and growing nation. Gambling is a cancer eating away at the qualities that help to make people what they are. I believe there are alternatives, but no one will find these alternatives as long as they can find the easy way out. I do not believe that gambling is good for the country,” Mr Francis said.

The government did not capitulate and Mr Francis was forced to resign as Minister of Development. Mr Moxey said that Mr Francis’ absence from the Cabinet table created a void that was difficult to fill.

“You had a man who had the capacity to run two major ministries, you had one man running both and you let him go. I sat in the back of him in the House. I saw when he wrote that note and put it in the hands of the PM.

“The prime minister could have torn it up, but he didn’t. Carl was a dedicated man and he had all of his ducks in a row and that’s when I knew that matters of conscious and integrity meant nothing to people who wanted to play politics,” he said.

Mr. Moxey sure has a lot to say recently. He can call for anything he wants to call for and so can I.. getting it is a whole different story.