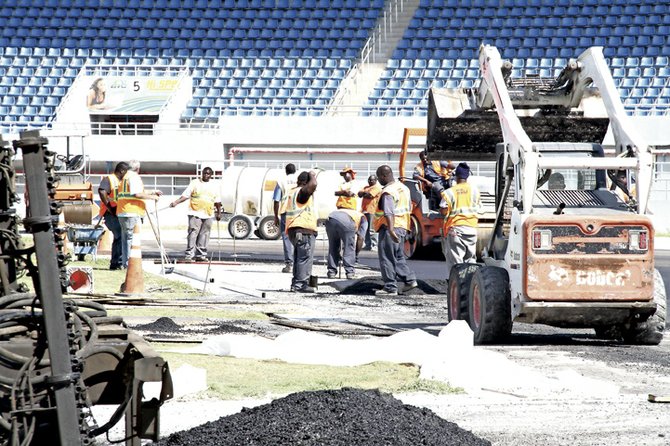 THE THOMAS A Robinson Stadium is “on track” to be completed just in time for the Bahamas to host the inaugural IAAF World Relays in May.

In January, the National Sports Authority (NSA) engaged the services of Mondo out of Italy to reconstruct the proper sized track at the new Thomas A Robinson Track and Field Stadium.

It’s projected that Mondo, which already has an engineer on site working with a number of local companies, will have the new surface completed by the end of April, just in time to have a test run May 10-11 with the one lane-one island concept that will be introduced, along with the trials for the Bahamas team before the IAAF World Relays May 24-25.

NSA president Leroy Archer said while it is unfortunate that the necessary work at the stadium could not be completed last year, workers have been working around the clock to ensure that the stadium and its track is completed before the inaugural event.

“In order for us to make that realisation complete, not only to host the IAAF World Relays but at any world sporting event that we may want to apply for in the future, we have done the necessary upgrades to our stadium at this time, so that we are prepared for those situations. What we have done is that we have had to replace and repair our track. We have had to replace and repair the jump strip. We are preparing an addition for the media, for over 100 media members to come in so we will not have issues with housing the media. We still have to ensure that we have adequate WiFi and other media amenities in preparation for the relays.”

Mondo and the local companies employ around 150 people to work on various aspects of the project that is estimated to cost around $12 million, including an upgrade to the original Thomas A Robinson Track and Field Stadium.

In addition to resurfacing the track, another component is construction of a tribunal for the media as they prepare for more than 100 local and international journalists who will be covering the World Relays.

The original track was the level of class two, they had to replace it with a class one, and while the renovations are currently underway, he anticipates that it will be completely ready for the test event, a free-for-all session to iron out all of the kinks to ensure that the LOC can handle all of the logistics to pull off the relays.