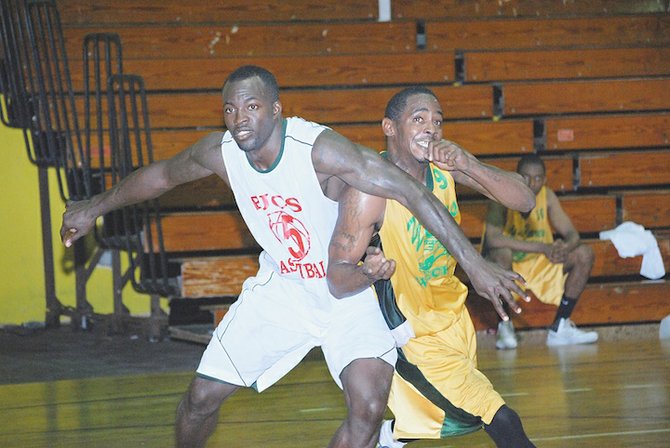 If the regular season was any indication, the PJ’s Cleaning Services Stingers feel they should have no problem dealing with the Y-Care Wreckers in their New Providence Basketball Association men’s first round best-of-five playoff series.

Just like they did in their three head-to-head confrontations that the Stingers won, PJ’s got the postseason started Monday night at the AF Adderley Gymnasium with a 89-77 decision over Y-Cares for a 1-0 lead in the John Archer divisional match-up between the second and third place teams.

They joined the pennant winning Commonwealth Bank Giants, who knocked off the Double R Services Limited Cleaners in a closer contest, 103-99, in the feature game to also go up 1-0 in the other half of their bracket.

PJ’s head coach Lavardo Bowleg said they played well in spurts, but those spurts were good enough to hold off the rallies that Y-Care threw at them throughout the game.

“It was a good game. We played well, but we had too many turnovers,” Bowleg said. “I just feel we could have played a lot better because our defence was just too lazy and that allowed them to get into the game when they made their comeback.”

The Stingers got a balanced scoring attack, led by Devon Ferguson with 18 points, eight rebounds and five assists. Cordero Thompson had 17 points and eight rebounds, while Ian ‘Wire’ Pinder finished with 11 points, six rebounds and three assists. Able Joseph, Tavares Roker and Jason Mitchell all helped out with nine points.

For the Wreckers, Anthony Whylly had 28 points and eight rebounds, Mario Pickstock had 15 points, six rebounds and four assists, Daniel Bullard had 14 points and seven rebounds and Kessi Micial chipped in with 11 points.

Y-Care’s coach Donnie Culmer said they simply let the game get away from them. “We had our chances to win this game,” Culmer said. “They went on a run and we cut the lead down to four, but then we started to rush the ball too much.

“We went to the free throw line 43 times and only made 18 and got beat by just 10. I’m not looking at the turnovers. If we had capitalised on the free throws, we would have won this game. But if you can’t hit free throws, you can’t win the playoffs.”

As they prepare for game two on Saturday night, Bowleg said they just have to tighten up on their defence, execute, share the basketball and there’s no way that “the Wreckers will be able to beat us.” “We are not trying to give them anything like we did in the regular season. We want to end this as early as we can.”

For game two, Culmer said they will have to “concentrate on their free throws, their guards have to make better decisions by taking the ball to the hole, especially when we have a team like that in foul trouble.”

The game turned out to be a keenly contested one as the two teams ended the first quarter tied at 20-20. But to start the second quarter, the Stingers went on a 6-0 run to open a slim 26-20 lead. That was short-lived as the Wreckers did their damage by trimming the deficit to just one, 28-27, with four minutes and 38 seconds left before the half.

In the third quarter, despite the ejection of one of their players for obscene language, PJ’s was still able to keep their composure and the lead. They built as much as a 13-point lead and managed to hold on for a 65-56 advantage going into the fourth.

Both teams went to the long ball as Pinder sunk one of his three-pointers to stop another run for Y-Cares to go up 76-64 with 6:29 left to play. After watching the Stingers double their lead, Pickstock canned a three-pointer to provide a glimmer of hope at 2:31 and down 84-74. But Morley converted a pair of three throws with 1:53 on the clock as the Stingers stopped the final run by the Wreckers to get back into the game.

The winner of this series will go on to play the winner of the other half of the divisional match-up between the Giants and the Cleaners.

The Double R Services Limited truly believe that they can be a force to reckon with in the postseason. They gave the former champions a run for their money, but in the end, Commonwealth Bank was just a little too much to handle. Gamaliel Rose had 23 points and 11 rebounds to pace the Giants’ attack. Adrian Miller had 22 points, three rebounds and three assists, Mark Hanna had 14 points and seven rebounds, Michael Bain had 12 points and four assists, Jeffrey Henfield had 12 points and seven rebounds and Jackson Jacob contributed eight points with three rebounds.

The NPBA will take a break until Friday when the other half of the playoff picture in the Vince Ferguson Division is slated to get underway.

In the opener at 7:30pm, the Real Deal Shockers are set to play the Pyramid Food Rockets and the defending champions Mail Boat Cybots are scheduled to face the Island Luck Pros in the feature contest at 9pm. Those games that played on Monday will pick up with game two on Saturday night.

The NPBA, headed by Keith ‘Belzee’ Smith, has dedicated the season to the ailing long-time coach Charles ‘Chuck’ Mackey.