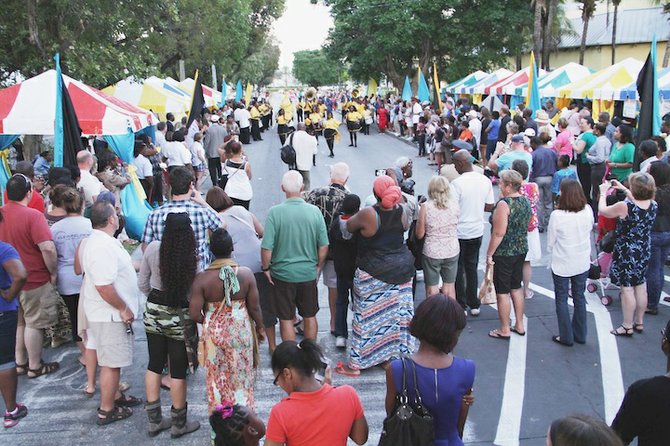 PRIME Minister Perry Christie and Minister of Tourism Obie Wilchcombe will head a delegation of government and industry personnel for the official opening of Memories Grand Bahama Island resort today.

Tourism experts believe this event is a symbol of “a new era of prosperity” for the island.

The Bahamas Tourism Office on Grand Bahama Island has worked with island authorities to hold various community events over the weekend, leading up to the official opening ceremony. The events included a street party on the Lucayan strip in front of Memories on Friday and a People-to-People Tea Party and gospel concert at the Port Lucayan Marketplace yesterday evening.

“This is actually a Grand Bahama Island revitalization,” said Betty Bethel, general manager of the Ministry of Tourism on Grand Bahama Island. “The whole idea of bringing this culture and life to this area is that this is where the main boost of tourism is happening. We wanted an opportunity for the community as well as visitors to the island to come out and celebrate our revitalisation. The Memories property, which is officially opening on Monday is the core component of the revitalization of this island. So we want to celebrate that.”

Ms Bethel said visitors were able to mingle with Bahamians over the weekend since guests are able to make their way to the island from six Canadian cities through an airlift arrangement with Sunwing Airlines. Since January 16, Sunwing flights have served Grand Bahama from Toronto, Winnipeg, Halifax, Edmonton, Montreal and Ottawa.

“I’d like to quote our director general, who says that Grand Bahama is going to be the fastest growing destination in the region in 2014, and this is what this is all about,” Ms Bethel said.

“We have already seen that with the arrival of Sunwing from six cities in Canada.

“We are expecting at least 800 guests at this hotel alone this weekend.”

Ms Bethel said merchants, transportation providers, and other small businesses have already seen a positive impact in business due to the opening of Memories Resort.

“There’s an energy in this area now that you can sense. You can feel it,” she said.

Five restaurants and a plunge pool are some of the amenities available to Memories guests.

Betty, it's the 50th or 100th Grand Bahama revitalization. How long will this hotel last?

a year or two max...then it will implode and some other poor soul will buy it and GB will be revitalized AGAIN...for a couple years.

So sad...Grand Bahama with it's size and infrastructure and it proximity to the US should be the booming capital of the Bahamas...shipping to and from the US is cheaper, flights shorter, land mass greater, more space to move about and expand...but instead that poor island is a decaying dump and 90%+ of the population of this country cram themselves onto Nassau like sardines in a can.

I'm optimistic about Grand Bahama. I am soo glad to see so many people working again. All of this negative talk is not impacting what is actually happening there. People are getting back to work and things are already getting better. So instead of finding something to gripe about, just pray for your fellow brothers on GB and that the economy would finally become somewhat stabilized. It is poised to become the booming capital... we will see. We will see.

I sure hope so TOV...I would LOVE to see Freeport and GB take a MUCH bigger role in how the overall Bahamian economy is structured, get people out of Nassau!! It has everything going for it as stated above, just lack of drive and followthrough by the higher ups and things fizzle. Push for indusry and other favourable enterprises to be housed in Freeport.

GBPA/Freeport should be our heavy industry/freeport capital. Leave tourism to another zone or island. Its not working.............. period