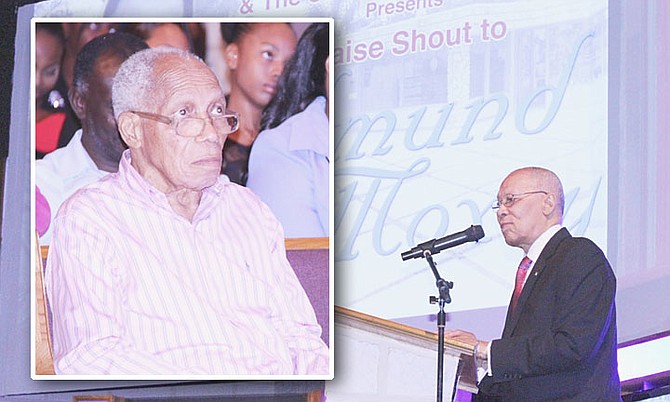 GOVERNOR General Sir Arthur Foulkes, in a tribute paid to Edmund Moxey, creator of the Jumbey Village dream, recalled their years in the political trenches together, nourishing a single ambition – the “salvation of a people.”

It was felt that today’s Bahamians are paying the price of the brutal crushing of Jumbey Village in those early years of political change.

Sir Arthur was the main speaker Friday night in a special programme to pay tribute to the 80-year-old politician and accomplished musician. The programme, organised by the College of the Bahamas, with college lecturer, Felix Bethel as emcee, was held at the Bahamas Harvest Church, Prince Charles Drive. Mario Moxey, Ed Moxey’s son, is the pastor of the church.

Following is Sir Arthur’s speech without notes, but “spoken from the heart.”

UNLIKE Dr (Felix) Bethel, I am considerably beyond the age of 65 so it is a little risky for me to say even these few words without notes because I find that the senior moments are occurring more frequently these days. Nevertheless, I shall speak from my heart.

I will start with a story, a tale. I know there is at least one person here who has heard it before, but we were campaigning in Andros, Mangrove Cay. And it was Sir Milo Butler, Mr Charles Rodriguez, Edmund Moxey and me. Now Sir Milo and Mr Rodriguez were older than we were, so they got the two beds in Ms Green house, and we got two pillows to lie down on the floor in the front room. And they were both big men, Sir Milo and Mr Rodriguez, and how can I delicately put this, their laboured breathing while they were asleep disturbed us to the extent that we couldn’t sleep. So Ed and I looked at each other, and I said look we’re not going to get any sleep we might as well go out. Ed said let’s go to the beach. We got out of the house and to the beach and we were confronted by hoards of mosquitoes and sandflies and had to beat a hasty retreat back. The next morning at breakfast the older men asked us how we slept, and I struggle to say we didn’t tell them the truth. Just, oh, we slept fine!

I say that to say, I have known this man we have come here this evening to pay tribute to, for the better part of half a century. He has been my friend all that time and his dear wife too. He and I have had the privilege of being in the political trenches at a time when it is difficult for young people to understand what we were up against in those days. So I know this man very well and can tell you that that was an era of great men, but there was none greater than Edmund Moxey.

You know the saying about what happens to a dream deferred, how it will shrivel up like a raisin in the sun. In the case of Ed Moxey, we have seen some wonderful things as a result of our struggles. We have passed a time when children had to leave school at the age of 14 and only a few could go to Government High for examination. Now we have thousands of young Bahamians with Bachelors, Masters, and even Doctorates, three Rhodes scholars. But the dream was about even more than that, and Edmund Moxey’s dream was about the social, cultural, and economic development of his people. I believe you just saw the documentary and that tells you some of the story. But what is so painful is that this dream that Edmund Moxey had for the upliftment and development of his people in that concept of Jumbey Village, that dream was strangled like an infant in its crib. It didn’t succeed, it didn’t fail, it was crushed deliberately, and brutally crushed. And you know it is true that if you plant a certain kind of seed today, you will reap the fruit of that seed at some time in the future. If you plant a different kind of seed, you will reap the fruit from that too. One is sweet and the other is exceedingly bitter. And today because of the crushing, the brutal destruction of Ed Moxey’s dream, we Bahamians are paying the price.

Now imagine this, let’s look at this from the point of view of tourism. We have tens of thousands of tourists coming on cruise ships practically every day, and the complaint is that there is nowhere for them to go. They go to Paradise Island, Paradise Island, if Ed Moxey’s dream had succeeded, Jumbey Village would have been such a place where it would have been impossible to visit Nassau and not to go over the hill to Jumbey Village. Because the vision was one of a total exposition of Bahamian culture in one big village. Theatres, restaurants, art shops, craft shops, the whole total picture. Can you imagine that? How wonderful that would have been and for my people from over the hill. That is the dream that was crushed.

The economic benefit is obvious. Any number of young Bahamians and older Bahamians too from over the hill would have been economically empowered through Ed Moxey’s dream, but I think more important than that is that our people would have been more culturally developed. Bahamian culture would have been on display and in that developed for ourselves and also for our visitors, and the total picture, music, food, dance, Junkanoo, poetry. I thought about it many times, Ed, and I could only imagine how you feel when you think about it. What might have been, what might have been, but rest assured my brother that there are those of us who appreciate what you tried to do, the vision you had for your people. You were pure, you are pure. I never saw in you any great desire for personal position or fulfilment of personal ambition. Your talk, your actions were always about your people, and the plight of your people. That’s what he used to say, the plight of the people.

And so it is a great pleasure, even this tinge of sadness in my heart for what might have been. It is a great pleasure for me to be here, to pay tribute to Ed Moxey. But brother do not despair, I have travelled up and down these islands from Abaco to Inagua and the dream is not dead. And for you older people who always talking about this generation going to hell, I keep telling people the first time it was recorded that that was said by one generation of the coming generation, was about 4,000 years ago and it has continued since.

I can tell you that yes we have problems with some of our young people, most of the problems are caused by some of our older people. I have seen young people from Abaco to Inagua and all the islands in between who still have the Bahamian dream in their hearts who are still doing the right thing. I was in Long Island once for a graduation ceremony and the valedictorian was a young lady, I think she’s off to school now. I sat there transfixed as this young lady spoke, she was articulate, eloquent in spots, she knew what she was talking about, knew what was going on in the world, and I felt something like Nicodemus… “for my eyes have seen”.

I have seen in the faces and eyes of our young people, a braver, better Bahamas. We have hundreds and thousands of young Bahamians who are doing the right things in our country and I hope that the lives of men like Edmund Moxey, they will come to know about and that will help to be an inspiration to them because the talent is there and the love of country is there. And that really is all I want to say to you, God bless you, my brother and your family.

Young people please learn about your history, learn about great men like Edmund Moxey and let him and others be an inspiration to you as you continue to build our Bahamaland.