'Finishing Touches On The Newest And Fastest Track On The Planet' 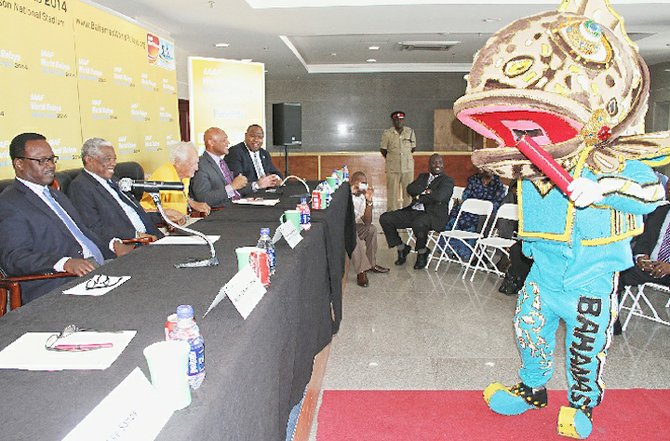 BREEZY - a Nassau Grouper - the official mascot of the Bahamas World Relays, made a special appearance at yesterday’s press conference.

IF there were any doubts about the state of readiness for the International Amateur Athletic Federation’s inaugural World Relays at the new Thomas A Robinson National Stadium, the Bahamas Government, the National Sports Authority and the Local Organizing Committee put those to rest on Thursday.

Dr Bernard Nottage, the government representative on the Local Organising Committee, led a delegation of officials at a press conference to outline the progress and to view the actual updates that have taken place and are still left before the relays are held May 24-25.

“You will witness the finishing touches on the newest and fastest track on the planet,” boasted Dr Daniel Johnson, the Minister of Youth, Sports and Culture.

“We’re going to show the world how it’s done. No one hosts people better than Bahamians. No one. For years, we’ve had the sun, sands and sea and we led in that category. So we seek to distance ourselves in another category in sports tourism. When they come to the Bahamas, they will see sports in paradise.”

Nottage, the minister of national security, filled in for Prime Minister Perry Christie, who was scheduled to participate in the function. In his absence, Nottage got a chance to brag about his sprinting prowess as opposed to hearing another story of Christie’s legacy as a triple jumper.

His last appearance was in a relay event in Edmonton, Canada in 1970 at the Commonwealth Games, two years after he ran at the 1968 Olympic Games in Mexico. While he didn’t get a chance to help the Bahamas have the national anthem or the flag raised at either event, Nottage said he was thrilled to have watched legendary sprinter Thomas A Robinson accomplish the feat.

“For those of us who ran back then, none of us would envision us having a stadium like we have today,” Nottage said. “The reason why the first world relays championships is being held in the Bahamas is because of the quality of athletes that we have had over the last several years.”

Nottage, a former president of the Bahamas Association of Athletic Associations, referred to ‘Golden Girls’ Pauline Davis-Thompson and Eldece Clarke, who were both present. He noted how they set the stage as members of the ‘Golden Girls’ in 1996 in Atlanta, Georgia and the trend continued with the ‘Golden Knights’ in 2012 in London, England.

Davis, now sitting as the first and only woman of colour ever on the executive board of the IAAF, said these are exciting times for track and field, not just in the Bahamas, but around the world.

“I wish to confirm that the IAAF, led by its president Lamine Diack, is most pleased with the preparation today,” she said. “Things are on schedule and we look forward to a most competitive and exciting World Relays competition. Special thank you is extended to the people of the Bahamas for putting on this event.”

Also addressing the media were LOC chairman Keith Parker and his deputy, Mike Sands, the president of the BAAA. Lionel Haven, the managing director of the LOC and Leroy Archer, the chairman of the NSA, all provided an update on the stadium. They all indicated that the Bahamas will be ready to host the biggest sporting event to be staged in the Bahamas.

Those in attendance got a treat as Breezy, the mascot for the World Relays, showed up. He entertained the crowd as he danced and passed the baton on to Davis-Thompson and Clarke. Breezy was designed by 14-year-old ninth grade student Kirshon Smith, a ninth grade student at Temple Christian Academy.

According to Smith, Breezy is a Nassau Grouper, the fastest fish alive, who is happy that the relays are coming to the Bahamas to show off his running ability whilst wearing a track suit draped in Bahamian colours with a map of the Bahamas tattooed on his right leg. He also sports an IAAF World Relays Bahamas 2014 baton.

Jeff Beckles, the manager of the new stadium, conducted the tour that took the participants through both the new and old TAR stadiums. During the tour, Beckles was able to outline all of the work that has been done so far and what is left to be completed before the relays get underway.

With just 21 days left, Mondo has completed the laying of the new surface in the stadium and is currently painting the lanes. All of the cosmetic work is being done, including the painting of the exterior and the completion of the construction of the concession stand. Fences have also been erected separating the track and the spectator areas.

Adjacent to the new stadium, workmen can also be seen updating the facilities within the old TAR stadium. The straight away warm up facility on the outside has been expanded and there is a lot of green space being completed around the two stadiums.

The LOC and the BAAA are now preparing for a “test meet” over the weekend of May 9-10 at the new stadium when the high schools and the Family Islands will be competing in a bid to get a chance to run in the pre-World Relays events that will take place 3:30-4:30pm on both May 24-25 just before the start of the relays at 5pm each day.

Is Breezy a cross between Danny Johnson and BJ Nottage, he surely looks like them.

leave it to a Bahamian government official to make some boisterous, non-factual based and inflated statements like "....the newest and fastest track on the planet....and "No one hosts people better than Bahamians"....haha....little children trying to act all grown up...