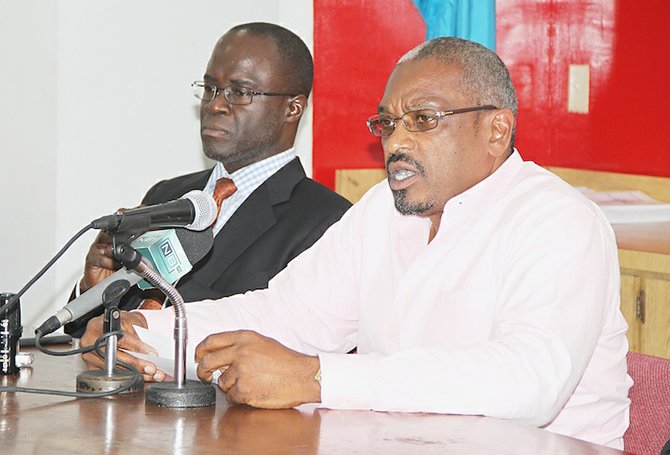 OPPOSITION leader Dr Hubert Minnis last night questioned who will be next in the government’s “political witch-hunt” following a police raid on FNM party chairman Darron Cash’s home, the result of an ongoing investigation into operations at the Bank of the Bahamas (BOB).

Mr Cash’s two small children were reportedly whisked away by the family’s housekeeper in an attempt to shield them from the dramatic ordeal when a police inspector and two sergeants from the Central Detective Unit (CDU) entered the home in the West Bay Street area yesterday morning.

The three officers, according to a statement from Mr Cash’s attorney, FNM senator Carl Bethel, seized two laptop computers and a cellular smart phone belonging to Mr Cash. The items were grabbed from his hands and taken by the CDU, who refused to deliver or to leave a copy of the search warrant, the statement said.

Assistant Commissioner of Police Anthony Ferguson said he would not comment on the events at Mr Cash’s house, but added that the police continue to actively investigate claims of possible policy breaches stemming from the BOB.

At a press conference at the FNM’s headquarters last night, Dr Minnis said his party will not be silenced but will instead take a stand for the apparent “political assault” on its chairman.

“The evolving scandals surrounding the BOB, a wholly Bahamian-owned institution, have been publicised and revealed by many sources, including the print newspapers having nothing to do with our national chairman.

apparent abuses and negligence of the BOB is shameful and has been properly criticised and highlighted by our national chairman, but also by others who made disclosures to newspapers.

“Is our chairman being targeted because he has been a passionate critic of the government’s inept handling of the BOB? And because his wife happens to work at the institution? It is the view of the FNM that the PLP government has abused its power to cause the police to launch a political witch-hunt upon one of our lead spokespersons. The FNM asks: who is next?”

According to Mr Bethel a constitutional motion has already been filed in the Supreme Court to seek redress for the violation of Mr Cash’s constitutional right to privacy. He expects that the case will see an initial hearing in court today.

The actions by the police, the statement said, was an unreasonable, unconstitutional and unlawful seizure and search of his personal property.

Over the last few months, Mr Cash and other FNMs have been critical of the government and its handling of the various concerns which have come to light over the management and lending practices of the BOB.

As a result bank executives, along with the government, have released several statements in an attempt to allay fears over reports that BOB was on the brink of collapse.

Minnis is wrong. This is not a witch hunt. This is pure bully tactics. Nothing else.

Her Majesty’s Minnis should be careful how he is quick to call this political, when some might view his own actions as his way to Dulcify his red chairman? Minnis should know this was no policeman’s “knock to talk” when showing up at the front door of his party’s chairman, asking if it was possible to have a chat over matters related to an ongoing police investigation at the Bank of Bahamas. Any lawyer worth their fees would instruct their client, not to add to what can already be a dramatic ordeal … cause once the Court allowed policeman’s to enter to search and cease, you have NO other option than to cooperate.

Idiotic. Any lawyer worth their fees knows the first thing the officer HAS to do BEFORE he sets foot on private property to perform a search, present the court ordered search warrant to the occupant. I understand from the Commissioner that this is a force staffed with professionals. This is not Russia.

Pandora's box just got busted open.. The questions above are valid. ??????? Where is the police spokes person with answers? What facts where used to obtain this warrant, what are the accusations? Where is copy of warrant so public can read & decide for our self? Who else are subjects of this investigation? Police spokes person or A.G office where u @?

I hope they investigate where the money from the BOB went,with the same vigor and determination, as to who leaked the corruption

Comrade I view this as a personal matter between a citizen and the policeman's, not reason to throw the forces of Her Majesty's Government-in-Waiting, behind a man who can well afford excellent legal advice, if the right warrant protocol was followed or not, when people go hungry cause they don't have no paychecks. Minnis what about equal effort on behalf of the poor people? There are sound reasons, why the public are not rushing to buy BOB shares. BOB belongs to the government and the government is answerable to. we the people. Just once, I would like to see a peoples government "come clean," BOB is the ideal candidate. The National Insurance Board would be #2, to begin explaining money things?

Personal matter? Are you serious? This could be you in front of your husband and kids. Millions gone and we still paying the people who took it and providing them with police escorts. Is that bass ackwards or what?

This is scary. Mr. Cash is Chairman of the FNM and no doubt has confidential information on his computer and phone. If so the thought is scary that that information could fall into the wrong hands under pretense of them trying to get information on BOB.

Yeap. Assuming the forensics are handled on the equipment PROPERLY, the only information that should be gleaned off of any of those machines should be BoB related...but you KNOW...especially with the PLP pulling the strings on this one, that they are going to rape those laptops of any and all information for their political gain. It's too tempting for them not to...it's a done deal, PLP top brass have probably already hacked into those machines for every other reason except BoB business. The whole thing stinks. Like stated before...they seem more concerned about finding who is leaking apparently factual information, than trying to stop the problems and abuse within BoB in the first place. They know they've been caught and busted misusing funds in there, so now it is a witch hunt to find the source of the leak and plug it so they can carry on behind close doors with their illegal activities.

Another example of the gross negligence of the police force. Improperly executed warrant for a high-up official, makes you wonder how many other warrants they have executed in such a manner.

These red shirts are too damn drama minded. Comrades when you be making political jokes about Daron's computer and cell files, possibly holding "sensitive informational" about the red shirts internal business, someone might take you seriously. Even if they did, Minnis and Comrade Sister Loretta, would be demanding a peek.

Is the Tribune's report factual that; The three officers, according to a statement from Mr Cash’s attorney, FNM senator Carl Bethel, seized two laptop computers and a cellular smart phone belonging to Mr Cash. The items were "GRABBED" from his (Daron's) hands and taken by the CDU?"

If that claim is indeed misleading, you have a fair reporting journalistic obligation to your readers and the attending police officers, to immediately publish a retraction?

And if they're factual? What then?

And, if they are false?

The readers perception should not be painted bias red, IF and i say IF, the facts may not be as presented. IF incorrect, the story rightfully belongs in the reporter's story rejects trash bin, not as the lead story on the front page of a major newspaper. Red ink or not.

Two lap top computers and one cell phone grabbed from his hands . The Spin Doctor Minnis goes all around the mulberry bush and acts as if it is a political affront to the FNM Party. It is not... it is an investigation, a Police investigation into matters leaked from BOB.

More and more I believe that Dr. Minnis is serious, he just does not know any better. If one pays attention, most of what he says makes no sense. They have already been told that the bad loans were under the FNM Government.

If Mr. Cash has done nothing wrong. He has nothing to fear. But he does look like a very worried man.

Too bad the FNM did not create an independent office of Ombudsman while they were in power. They would now have him/her to assist them with their grievances against the Government.

Instead they allowed the country to remain a dictatorship instead of creating better checks and balances.

You reap what you sow.