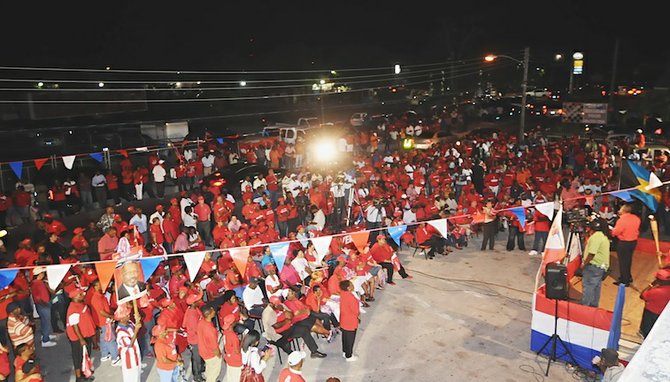 THE FREE National Movement voiced their displeasure at a street rally last night over what they claimed was an “injustice” done to party chairman Darron Cash.

Hours before Mr Cash’s expected constitutional motion before the Supreme Court seeking redress for the violation of his constitutional right to privacy, a number of his colleagues took to the podium outside the party’s Mackey Street headquarters to voice their concern about the “threat to democracy.”

Senator Heather Hunt said to scores of supporters last evening that “injustice anywhere is a threat to justice everywhere.”

“What happened to our Chairman, Darron Cash, last week is an indication that this power-hungry, self-interested government will now stoop to Gestapo-like tactics to intimidate and threaten the FNM,” she claimed.

“It cannot be acceptable that the police can enter a private citizen’s home and demand the turnover of personal items like computers and cell phones without clear legal cause. We must demand respect and observance of our right to privacy.”

“Who authorised this invasion of our Chairman’s home? On what legal authority did they enter his home and remove his personal possessions? Someone must answer,” she demanded.

Peter Turnquest, the MP for East Grand Bahama, called it a “very sad and scary time in our country.”

“We meet at a time,” he told supporters, “when our democracy is being threatened, when our citizens are being intimidated, spied on, unfairly targeted, harassed and detained.”

Mr Cash’s two small children were reportedly whisked away by the family’s housekeeper in an attempt to shield them from the dramatic ordeal which came as a result of an ongoing investigation into operations at the Bank of the Bahamas (BOB).

National Security Minister Dr Bernard Nottage has since denied having any prior knowledge that police planned to execute a search warrant of the FNM chairman’s home.

“The Minister of National Security claims he had no prior knowledge of the search warrant and the Commissioner of Police was out of the country,” he noted, further questioning: “Who is running National Security? Who gave the order?”

“Bahamas Uncensored claimed that if the PLP were in Opposition, they would have been incensed and would have agitated to the end. Well the FNM holds that same position and we will agitate to the end,” he added.

Whisked away the children, by the house keeper. Where was the employee of BOB? They should give the Police the benefit of the doubt. until proven otherwise, I am sure the Police would know that there would be many lies and backlashes from the disagreeable. FNM's

Birdie you make some really nonsensical comments...law and order is not a "benefit of the doubt" game, not for the police. Policemen and women are charged to operate to the letter of the law. If they do not, their evidence is thrown out and in serious cases murderers walk free. THINK sometime, please.

THINK" there is all ways two sides to a story. You have only been told the side of Mr. Cash. You must wait to hear the side of the Police. Then one can make a judgment. That is what people who think do.