Pm 'Would Not Put Up Murder Signs' 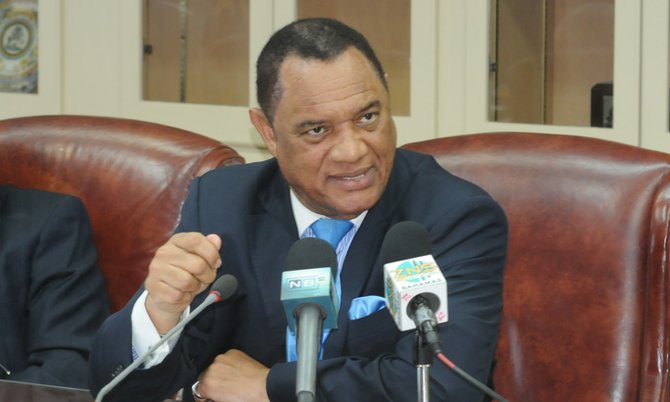 PRIME Minister Perry Christie said yesterday he does not regret the “murder” billboards his  administration posted prior to the 2012 general election but if he had the choice to do it again, he wouldn’t.

In the run-up to the general election, the PLP erected the billboards in tourist areas and other areas of New Providence highlighting the murder problem under the FNM administration.

The billboards read ”Under the FNM government 490 plus murders.”

Now, on the anniversary of their second year in government, Mr Christie said he has “accepted and acknowledged” that crime is “a matter for all” not just the government.

“I think we must all learn in the light of our experiences. I passed the stage of whether there is regret, but if I would do it again, the answer is no. You do not regret, you move on and you learn. I think tonight you will find the Free National Movement will speak on crime and they may well be unsundry in their language: will they regret it?

“I don’t know if that will be the question you ask them, but the point is we have accepted, acknowledged and you have heard Dr Nottage present today that crime is a matter for all and he expects everybody to man up on this issue and that we must move forward,” he said.

“So the best I can tell you is if were faced with the same circumstances and I had to make the decision I would not do it again.”

However, Minister of National Security Dr Bernard Nottage said there has been a “systematic reduction” in crime and murders since the PLP came into power.

While acknowledging that the level of crime is still unacceptable and “too high”, Dr Nottage said he is satisfied with the work the government and the police have done this far.

However, he said, crime is not something that can be fixed overnight and it will take “time” to see significant progress.

“Overall there has been a systematic reduction in crime. This year for example between January and the end of April we have had a reduction in all phases of crime in the country both against people, except with a slight increase in the numbers of rape, and in crimes against property - that is housebreaking stealing, stealing from vehicles - have been reduced.

“In New Providence there has been one less murder than there was last year and I single out murders because murders create concern among the population. It is something that we are most concerned about and if we are able to reduce the amount of murders per year I think that will be a tremendous relief to the average person in our country,” he said.

“The truth is that crime requires a lot of different strategies and we have, over the last several months, been introducing a number of strategies we think will work. But when it comes to the root causes of crime I am satisfied and research has shown that family dysfunction is the basis for a lot of the crime.

“As much as we like to talk about it and criticise ourselves for it, the fact is crime is not something that can be fixed overnight and you may say two years is a long time and I agree with you. I spend every awake hour strategising, discussing and meeting but it will take a long time. The truth is we are making progress, significant progress and I am personally satisfied that we are on the right track.”

He's saying there has been a systematic reduction with 1 less murder, while rape and breaking and entering are both on the rise? They have also never gotten to the bottom of the misreported crime stats. What happened to all of those stabbed and shot people at the hospital that were never accounted for in the police statistics.

Crime is most certainly not being reduced.

One murder less and that's a systematic reduction. if 2 murders happen tomorrow shall we call that a systematic increase ? These guys are nuts,you can't make this stuff up.

P.M who cares what the opposition thinks, if u r going to admit the signs were a bad idea, especially in tourist areas, own it and move on. But here lies the problem with our politicians & the explanation as to why we are in this state of affairs with crime. Our politicians are not statesmen, that is country before selfishness. All they cared about was winning, did not matter if the methods were harmful to the Bahamas or not. Just like in the eighties all they cared about was getting paid no matter whether it was drug money, robbing the public funds, side deals from foreign investors etc. Education, Family planning, good economic deal making on behalf of the Bahamian people would have drastically reduced the ignorance we see today. Its going to take a lot of changes to clean up this mess, u have had 2 almost 3 generations of kids that are now adults born since the 80's. Many grew up in piss poor conditions, fatherless homes & are poorly educated. It is the dysfunctions during this time period that's feed the crime. The war on crime has to include the war on ignorance. My hope is If we can just convince some ignorant fool to put on a condom or reduce or eliminate the illegal flow of immigrants that would at least keep the problem from expanding until other solutions are working.

Sad to say it but Democracy encourage party first and to hell with what is good for the country, look around in any democratic country and you will see the same thing going on. It may be the best form of government but that is one of the major flaws with it.

@Bahamianpride. How right you are. That's what I've been trying to explain to a lot of Bahamian people. What we're reaping in this country is that which we have sown over the past three plus decades. From the drug running culture of the 70's and 80's under Sir Lynden's PLP, to the rampant carnage and bloodshed of the 2000's under both the FNM and PLP. It pains me to say it... but I think our county is doomed.

When you throw stones you should no live in a glass house.

I suppose not, but you can certainly warn your neighbour about an imminent hale storm

LOL Why you does treat Tal like that man. LMAO!

Perry Christie said yesterday he does not regret the “murder” billboards his administration posted prior to the 2012 general election but if he had the choice to do it again, he wouldn’t.

Nonsensical, saying I wouldn't do it again means I regret "something" about what I did.

While acknowledging that the level of crime is still unacceptable and “too high”, Dr Nottage said he is satisfied with the work the government and the police have done this far.

In New Providence there has been one less murder than there was last year and I single out murders because murders create concern among the population. It is something that we are most concerned about and if we are able to reduce the amount of murders per year I think that will be a tremendous relief to the average person in our country,” he said.

What an absolutely dumb statement to make over 1 murder. Noboody's fears about the murder count have been allayed, people are crying out daily about the crime...what if while you were speaking three murders were committed pushing the rate higher than last year?

Well said. The Prime Minister's utterances on crime are a disgrace. He treats the populace like idiots. That's fine for those who voted the PLP back to power but the majority of the electorate did not vote for this abysmal excuse for a Government.

Has everyone forgotten about the 4burnt bodies that were found on, was it Anguilla Cay?? The deaths have not been classified so does that mean they can not be counted? Foul play was definitely suspected I do believe.

No man...that was just a bit of causing harm...actually, they were covering themselves up with car tires to keep warm, not realizing that a random super focused beam of light would cause the tires to spontaneously combust...all very innocent really.

PGC and Nottage are so full of sh!t. It is really sad that they think they are fooling Bahamians. What gall must one have to come out and say there's been a systematic reduction in crime and tie that to there being one less murder in N.P. to date. I guess he picked N.P. because in G.B. there has been an increase. Ok, one less murder - let's throw him a parade.

Did i just read a confession?

So, this is the extent a political party resort to for personal gain? You mean, the Bahamas was painted as a land rich with murderous outlaws in view of visitors by this government? Knowing fully, the potential havoc it might have shadowed upon the economy and those who live here? Simply, for emotional manipulation and votes?

A single murder count decrease should be seen as notable? Is this kindergarden or what? Crime is to be blamed on the government, the opposition and the citizens. Murders in the Bahamas is a Bahamian problem not a political one!

I am appalled by the mediocrities within Bahamian politics. Is this a circus we are all living in?

Yes means no and no means what?

PGC has switched his hair colour back to black. He flirted with brown hair dye for awhile. It looks like the cheap Miss Clairol that you get at Lowes.