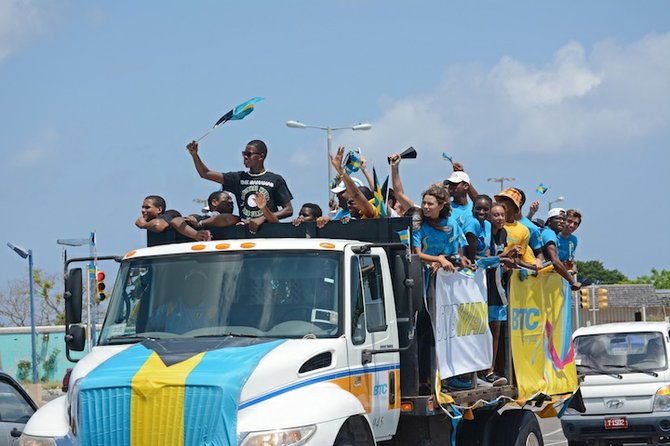 THE celebration for the history-making Bahamas swimming team continued yesterday with a motorcade through the streets of the capital, the latest show of a country’s appreciation.

With many of the 36 team members and coaching staff in tow, the motorcade began at Montagu Beach and travelled through major thoroughfares in Nassau before ending at the Ministry of Youth, Sports and Culture on Thompson Boulevard. The team was then treated to a luncheon by the Ministry.

Team Bahamas head coach Andy Knowles said he and his entire team have been overwhelmed by the gratitude expressed by the Bahamian public since the team’s triumphant return from the the meet in Aruba last month – the first time they have ever won the annual CARIFTA championship, the top regional event.

“The reception has been great from the moment we got back. People have expressed how proud they are of this team everywhere we go. The delegation was there to meet us at the airport, there was a lot of cheering from the crowd, the Minister and other executives were there so that was good.

“Then we had the recognition at the House of Assembly, which was really special for these kids. Then, of course, there was the parade and the luncheon reception,” he said. “I think it was all great. The Bahamas has gone out of its way to recognise our young athletes and I have been pleased with that.”

Most awesome and well deserved!!

Congratulations to our swim team for a job well done!!!