Media Freedom For A Better Bahamas 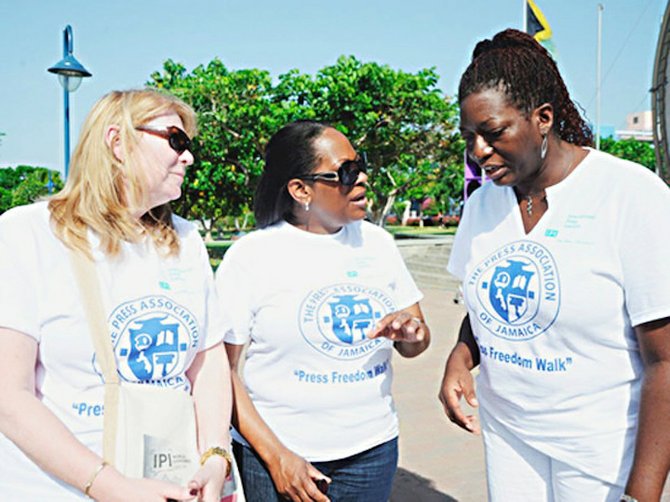 NEWS media practitioners in the Bahamas have broad shoulders. Newspaper readers lament sensationalist slant while chastising journalists for not tackling more controversial topics. It would seem at times that the public would wish that journalists uncover corruption at every instance - as long as it doesn’t challenge their political or religious figureheads.

Last week, Minister of Labour Shane Gibson admitted that while he could divulge how much the government spent on foreign advice for the National Health Care scheme, he would not because he didn’t want to dilute focus from his parliamentary contribution. A few days later, Minister of Environment Kenred Dorsett brushed off questions concerning Bimini dredging because he felt that the focus should be on damage control for Grand Bahama rumours. He prefaced this by saying that there is a critical need for more public dialogue on the issue.

Earlier this month, journalists from the region convened in Jamaica to mark World Press Freedom Day. At a forum jointly hosted by UNESCO and Jamaican media associations, journalists deliberated over the impact of media on development and developmental agenda. Caribbean Institute of Media and Communication director and media scholar Hopeton Dunn and veteran journalist Fae Ellington were among many that called for a return to the developmental media model, and the critical need for small island state media to unpack propaganda as they struggle to balance what’s more important versus what’s more urgent.

In the breakaway sessions administered by UNESCO, journalists presented on regional developments that are setting a precedent for the future of press freedom, such as telecommunications reform in Mexico that many protest will allow the government to arbitrarily censor internet content, or the British Virgin Island’s electronic laws that could be used to target journalists.

For two days in Kingston, media practitioners debated what it meant to move intentionally from feigned neutral observance to active advocacy; and the pesky six-letter-word, agenda.

Despite the debate, there was a common thread that all media challenges, all developmental challenges in the region, were as inextricably linked as is our colonial history.

Clive Bacchus, president of the Association of Caribbean MediaWorkers, said: “Hopefully, this workshop will keep the spotlight on the importance of journalism, the importance of us doing our jobs properly, the importance of people recognising that free expression extends not only to journalists but it has direct impact on their wellbeing and their ability to live in democratic societies.

“We want to keep the spotlight on removing impunity for people who are essentially injuring, hurting and killing journalists across the world, and also increase access to information because without detailed information people cannot make informed decisions. We also want to encourage our colleagues to up their game to the extent where we offer better services and better products in the media market.”

The quality of Bahamian media is a sore spot for both practitioner and audience. Mr Bacchus’ case for the importance of regional media association can be applied directly to the local media landscape, tasked with providing coverage to service an archipelagic nation that could be viewed as a micro-Caribbean.

Mr Bacchus said: “I think that we have some networks but we can do a lot better, we’re missing BBC Caribbean report, we’re missing the Caribbean news agencies like CANA news network. We’re missing not having correspondents reporting across the region from various islands. What we’re doing now is taking stuff from the internet and we don’t have that direct expert person on the ground giving you these stories in living colour.”

He said: “Reach out to the older journalists in the Bahamas and say how did you get it done before the internet, what are some of the things you can advise me on? But the important thing is to be visible, to ensure you are connected and to make sure you are not standing alone and someone has got your back, because as long as you’re doing your job you are going to rub people the wrong way. So you need to have that support.”

This week, reporters will heckle from two, maybe three, pillars away from the Cabinet building steps as ministers hurry past for a meeting of which they are always either late or very late. These perpetually tardy and woefully unsuspecting ministers will be expected to provide detailed information on whatever claim or inquiry a reporter can slow pitch: more often than not it is the day’s headline or a remnant issue of the week prior. On good days, it is a brand new issue that has not yet been denied an answer.

Where is the investigative work? is the cry of the everyday citizen, who does not understand that the pursuit of information - without legislative mandate - is directly correlated to the election circuit, to political will. At least this is what we would like to believe.

At a Freedom of Information forum last year, veteran journalist Nicki Kelly said that the absence of legislation was not an excuse for the state of the news media in the country. Mrs Kelly charged that investigative reporting, and the lack thereof, was indicative of work ethic and the willful deteriation of journalistic standards.

The forum was hosted by the steering committee for a hopeful association of Bahamian journalists. A committee that received little support, and even less fanfare. Despite acknowledging the value of association, it seems that media practitioners cannot get past the 12-hour news cycle to show up at something not for print the next day. Or perhaps as some at The Nassau Guardian proffered, when asked whether or not it would support the formation of a Bahamian association, there simply isn’t any respect for each other as professionals.

Mr Bacchus said: “I don’t know where to start with that. Too many of our media people don’t see the value of working together and some media owners discourage the formation of association because they see it perhaps as becoming a union, and a union would fight for better working conditions.

Although I am less hopeful about the prospects of a local network, I am undeterred in attempting to provide a platform to nurture an environment for professionalism and training. There are no barriers between us and the people - crime continues to prove this. And if traditional journalists are unwilling to associate, citizen journalists will continue to fill in the gap.

Sonia Gill, secretary general of the Caribbean Broadcasting Union, reasoned that news media have failed to educate population on how criminal laws also impact them.

“Journalists are considered a special group,” Mrs Gill said, “but there are no special laws for press. Our rights are citizen rights.”

Both media professionals and the public must analyse whether or not the current model of “ends justify the means” agenda setting by news media in the Bahamas will evolve. As theorists grapple with chronologically bounding the Civic Participation tradition, and defining the rise of the Fifth Estate via blogging and social media, Bahamians should demand more of our current media system.

It is time to ask ourselves, as journalist, as government, as activist, as citizen - will we or will they?

At such events the media personnel come together to discuss these burning issues which the industry is facing. Now accessing information has become simpler online, there are plenty of news sites around which keep the readers updated. From sports to http://sfvmedia.com/events/">san fernando valley events, these sites cover everything.