Gibson: No Details On N.H.I. Till I'M Ready 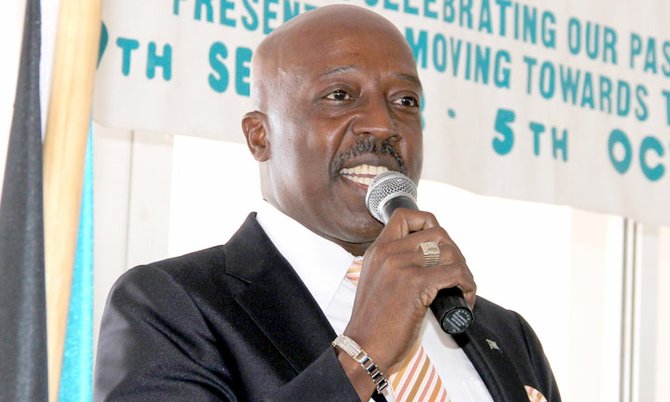 LABOUR and National Insurance Minister Shane Gibson said yesterday that he will divulge details about National Health Insurance “when all information is available” and that he won’t give “bits and pieces” of information when asked.

“We won’t release information after every committee meeting,” he said, adding: “We’re working on it. We’ve already began the process of how and when we will implement universal health care throughout the Bahamas.”

Mr Gibson’s comments came as the public awaits information about how much has been paid to Costa Rican accounting firm Sanigest Internacional to provide consultation services and a cost for implementing NHI.

Last week, State Finance Minister Michael Halkitis announced in the House of Assembly that the government is seeking to implement NHI by January 2016.

Foreign consultants made presentations to Cabinet on the proposed scheme last week, he confirmed.

The 2016 target date for NHI implementation is three years past the initial timeline promised by Health Minister Dr Perry Gomez during the 2012 election campaign.

Sounds remarkably like VAT...no information...but when it comes, you're gonna get whacked and pay for it whether you like it or not!!

he will stall until we forget about it

Everyone's complaining... but on Election Day the majority of Bahamians vote for these clowns. Y'all really think that Shane Gibson and the PLP are going to initiate health insurance for poor, black Bahamian people??? Keep waiting then.

Politicians in the Bahamas realize that it will take longer than their lifetime to correct the problems plaguing our nation. It will take at least fifteen years to up-root the bed of corruption that exist in government and national security. Furthermore, it would take pure, unadulterated honesty to do so. And as we all know, Bahamians are not an honest people. So rather than embracing the patriotic creed of "God and Country," politicians have opted-out and decided to divi-up the country's wealth amongst themselves (or what's left of it). They know they've got five years to borrow as much money as possible while deceitfully justifying the reason...... then, using white-collar theft practices, they skim profits from the top. As a result, false promises, failed project, incompetent excuses, and plain ole- fashion lies are the order of the day. The way they see it, it's the next government's problem. But the saddest thing of all is.... the people and the citizens of the Bahamas don't have enough sense, or know-how, to save themselves. Instead, every Election Day they go and vote in a ham and turkey government.

Shane should not have been put in charge of NIB........ with $1.5 billion. He will treat that as a slush fund and then the next generation will not be able to access their benefits. Just look at whats going on in the USA and Europe............... where in some countries the citizens pay up to 70% of their personal income back to the State in the form of taxes. This will be the likely outcome for The Bahamas.................... once we sign on to WTO

70% back to the state in income taxes??? Umm... I work in the U.S. and I don't pay back anything in taxes. As a matter of fact... the IRS pays me back tax money at the beginning of the year in the form of an income tax cheque. Only 11% of our biweekly salary goes towards Federal and State tax, while sales tax is around 7.5% depending on which city you live in. Where did you come up with 70%???

Friend, the USA is not the highest taxed country in the world ......... so further afield and check the tax systems of other developed countries