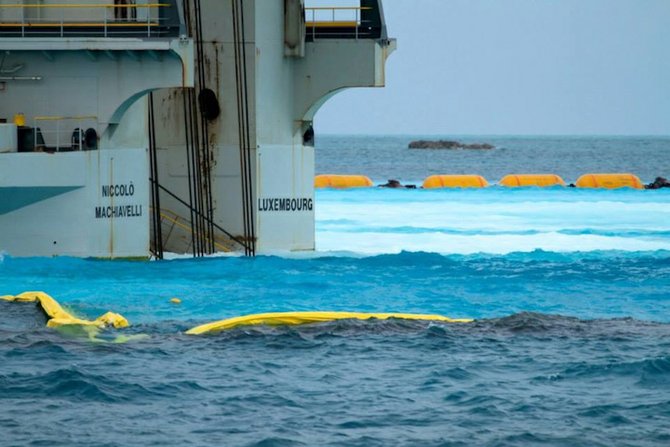 DESPITE frantic last-minute legal efforts by environmentalists to block it, dredging has begun in North Bimini. The Niccolo Machiavelli started operations Thursday as part of Resorts World Bimini’s controversial construction of a cruise ship terminal, 1,000-foot pier and man-made island.

Photographs taken at the site show a tail of silt, thrown up by the giant dredger, moving north. Resorts World Bimini announced Thursday that it had “officially commenced with the next phase of construction at the port of its top-flight destination resort.”

Hurray. Let's destroy the very thing that would be the reason for people come and visit in the first place. And Bahamians are taking it like sheep. Sabotage it!!!

As I said earlier, do you think they bought that dredger all the way from Europe if they did not intend to use it? Government has sold out! They (your government) bring the foreign investor into this country and they teach them how to disregard our laws and how to disrespect our people. So these strangers bag millions and millions in profits while our people fight amongst each other and kill one another. And then the government pretends to wonder why crime is so bad. If this government does not make opportunities available to Bahamians to participate in large scale investments in this country, we will become no more than slaves on a modern day plantation. Our rights are already being frittered away. South Florida is already overdeveloped so the Bahamas is growing in value by the day. Stand your ground Bahamians, or lose your country to a few "care less" politicians.

This is so sad man! When Mother Nature seeks her revenge, this country will weep!!

The dredger is very aptly named. "Machiavellianism" is a widely used negative term to characterize unscrupulous politicians of the sort Machiavelli described in The Prince. The book itself gained enormous notoriety and wide readership because the author seemed to be endorsing behavior often deemed as evil and immoral.

Niccolò Machiavelli being the author referred in the above post.

Sooooooooooooooo, whats going to happen when this resort folds and closes down??????? Just look at the other examples in Freeport, Eleuthera, Exuma, Andros, Nassau etc. We spend so much bending over backwards for these foreigners to pillage our country, the government gives all kinds of concessions, and look the other way as workers are taken advantage of............ and then we are left with the challenge to clean up their mess

And you wonder why so many people think Bahamians are stupid? So-called "government" that doesn't consult with constituents, doesn't even let them know what's going on...simply pockets $$ and SELLS OUT the country. The ignorance shown by successive Bahamian governments is unfathomable! Bimini's beautiful Radio Beach was destroyed almost 10 years ago by the government allowing channel dredge materials to be unceremoniously dumped directly on the beach. Fifteen feet high, huge boulders, packed tight enough that cars now drive on the area. They ruined one of the best beaches in the Bahamas because nobody had enough sense to figure out the destruction they were putting into place. All I can say is sometimes people get what they deserve. VOTE IN STUPID AND CORRUPT POLITICIANS AND GET INEPT AND EVEN CATASTROPHIC RESULTS. WHEN WILL ALL OF US DUMB A$$ BAHAMIANS LEARN?

BiminiRick... I agree with you. But who were the Bahamian people suppose to vote for??? The FNM and the PLP are the same thing. The FNM would have conducted secret dredging in Bimini and other islands aswell. We really have no choice but to throw our support behind the DNA.

BTW, did you EVER think any of this activity was going to stop the rape of Bimini's natural beauty? If you have a $ in this country you can get anything you want...damn the people!

The Problem is the clean up never gets done sheeprunner12, From the Pirates of the Caribbean East end G.B. mess to oil exploration derricks northern banks, Like Bahamians throwing KFC boxes out the window, on an industrial scale.