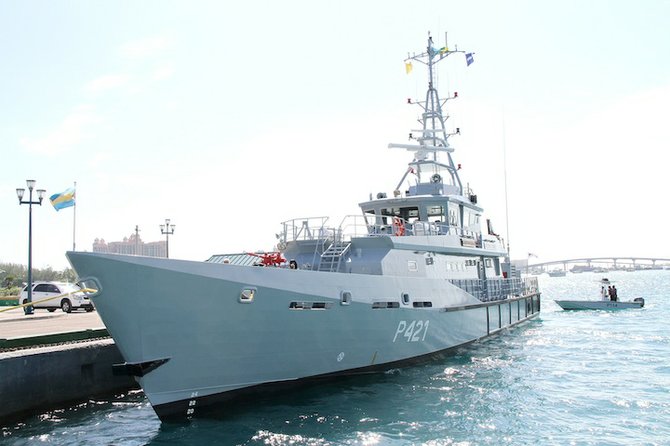 HMBS Arthur Hanna, the first of eight new vessels in the Royal Bahamas Defence Force’s new fleet, arrived in the country yesterday morning, nearly a month ahead of its proposed June 13 arrival date.

The acquisition of the vessels is a part of the RBDF’s Sandy Bottom Project.

“We have to be able to defend our borders and protect the integrity of our country,” Dr Nottage said yesterday, at a press conference at Prince George Wharf.

“As you know, illegal migration is the biggest problem we have, in terms of border invasion. But there are drugs and guns that always go through, there’s human smuggling, trafficking in persons, and the fight against all of those will be significantly enhanced by the acquisition of this fleet.

“In addition to that the last boat to be produced, the ‘Ro-Ro’ is going to be of inestimable value to us, in terms of assisting in the aid of hurricanes and disasters of any kind.”

The minister added that the RBDF would like to take advantage of other technology like helicopters and drones to enhance the country’s security.

HMBS Arthur Hanna, a 42-metre vessel, has an effective operational range of about 2,500 miles. It is worth 11m euros, or $15m, according to the vessel’s commanding officer Lieutenant Chapell Williams.

“It’s a part of our command’s plan to maintain the integrity of our waters, in terms of migrant patrols, illegal drug smuggling and I think it also speaks to the command’s intent in terms of decentralisation of the organisation,” Mr Williams said.

According to Commander Nedley Martinborough, the second of the eight vessels is expected to undergo her test run today in Holland and should be in the country around July 10.

He added that the new fleet of vessels is expected to serve the Defence Force for many years to come.

“These vessels fill a void that has been missing for several years, in that it provides a complete range of vessels from 100 ft to this one, which is 140 ft and we still have within our fleet the 200 ft HMBS Bahamas in Nassau, which is also set to receive some work during the Sandy Bottom project,” Cmdr Martinborough said.

“Given the existing fleet at the completion of the Sandy Bottom Project, that should suffice maritime security from the surface level for some years to come. I would daresay the next 15 or 20 years.”

The remaining six vessels, along with the nine inflatable boats and one landing craft, will arrive in the country over a three-year period.

The government announced in March that it would borrow $232m for the eight new vessels as well as upgrades to ports at Coral Harbour, Gun Point, Ragged Island and Mathew Town, Inagua, with all of the work being done by Van Oord and Damen Shipyards out of the Netherlands.

Of that figure, $149m is for the purchase of the fleet, while the remaining $75m is designated for the civil works.

The new vessel can accommodate up to 24 people, eight of whom will be trained in Holland beginning next week.

The remaining officers will be trained in New Providence as well as in Jamaica.

Meanwhile, the government has plans to hire 800 new Defence Force officers over the next five years.

The Bahamas will officially become the owners of the ship sometime this week once it has been signed over.

Somebody better inform Port-au-Prince !!!! They can send even more sloops now. The Bahamas has an extra tug boat to pull 'em from Ragged Island to Nassau.