Call For Answers Over $8m For Fleet Purchase 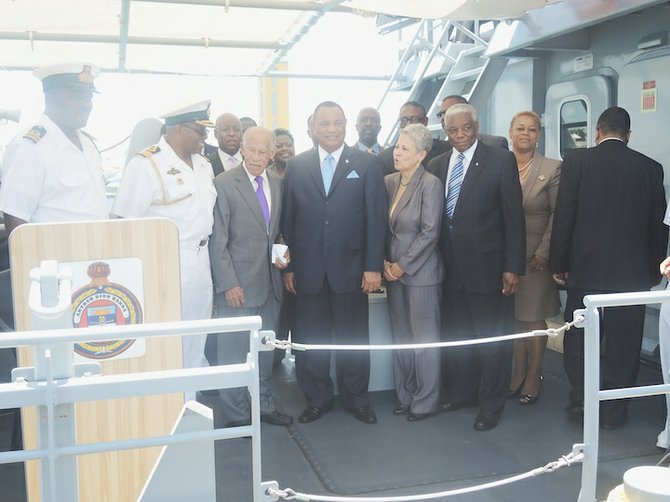 AFTER the first of eight new vessels for the Royal Bahamas Defence Force arrived in the Bahamas on Monday, an opposition MP again raised questions over the $8 she claims is “unaccounted for” in the acquisition of the fleet.

In March Free National Movement (FNM) Deputy Leader Loretta Butler-Turner questioned why the government is spending more money to have the new ships built for the RBDF than the FNM planned to spend on 11 from the same company less than two years ago.

This week she said she has still not received a proper explanation from the government on the matter.

“There were quite a few questions that I would have raised earlier during that particular (House of Assembly) debate in regards to the changes and the fact that there was $8m that was unaccounted for in terms of costs,” she told The Tribune.

“That for me raised questions and I still have not gotten satisfactory answers for it. But with regards to the sea worthiness of the existing vessels and the upgrades to the overall Defence Force, I have no difficulty with that because, as you know with an archipelagic nation such as ours, it’s very difficult to be able to man our borders with efficient vessels.”

Weeks before the May 2012 general election, the previous administration revealed plans to effect the largest upgrade to the RBDF with the construction of a new base, expanded ports and the purchase of 11 new vessels.

In December 2012, Prime Minister Perry Christie noted that the “affordability” of the move could possibly delay those plans.

However, last March the government announced the signing of a letter of intent with Damen Shipyards to acquire new vessels.

The government announced in March this year that it would borrow $232m for the eight new vessels as well as upgrades to ports at Coral Harbour, Gun Point, Ragged Island and Mathew Town, Inagua, with all of the work being done by Van Oord and Damen Shipyards out of the Netherlands.

Of that figure, $149m is for the purchase of the fleet, while the remaining $75m is designated for the civil works. The remaining $8m, Minister of National Security Dr Bernard Nottage has said, will accommodate any changes that might arise during the scope of the project.

On Monday, the first of eight new vessels arrived nearly a month ahead of its proposed June 13 arrival date.

“We have to be able to defend our borders and protect the integrity of our country,” Dr Nottage said at a press conference at Prince George Wharf.

“As you know, illegal migration is the biggest problem we have, in terms of border invasion. But there are drugs and guns that always go through, there’s human smuggling, trafficking in persons, and the fight against all of those will be significantly enhanced by the acquisition of this fleet.”

Yesterday, Mrs Butler-Turner also called on the government to look at other areas of technology that can be used in the surveillance of our country, including the purchase of drones or helicopters.

All this money to keep Haitians and Cubans out of the country!!!!!!!!!! WOW can we think of something else to do with all this money. Why don't you idiots buy use boats from the US Coast Guard. I just dont understand these people.

I want to know what the extra 8 mil is for

Perry and his clique have taken it and used it to grease their pockets. Every time the government allots a large sum of money for any particular project; some of the money always goes missing. Bahamian governing 101.

Yes what we need is more surveillance. Spending money we don't have.

If we want the truth we should ask the American NSA. They surly know as they have been spying on each and every one of us. Boy it would be great to get our hands on those records so we could know exactly what has been going on. The Americans know exactly who has been stealing our money, sooner or later we will know as well!

Why not invest in a Drone Program?

Woe. That kind of technology is very expensive. Plus drones have a limited range. But this is still a good idea.

Large military contracts to small nations are the most corrupt deals you will ever see and the fact that the PLP is purchasing these assets at a time when the country is on the brink of bankruptcy is tantamount to treason. Shame on you Perry Christie for stuffing your pockets with one hand and forcing new taxes on the poor with the other. You will no doubt muffle and contradict the truth but God can see what you do.