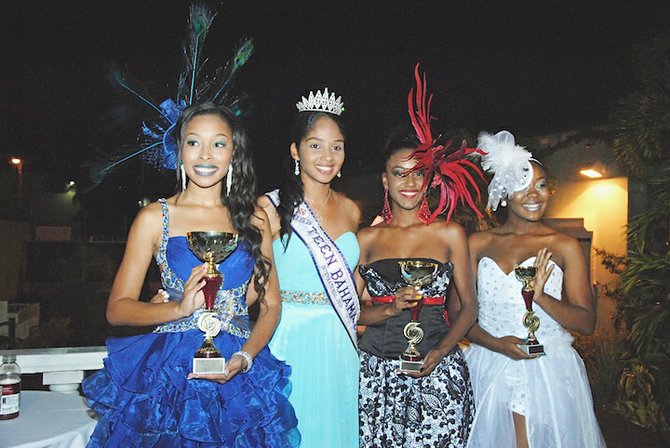 WITH JUST days to go before the big pageant finale, Miss Teen Bahamas International (MTBI) generated quite a buzz around town last weekend with the most glamorous of its preliminary events.

Last Saturday, the beauty queens attended MTBI’s Fashion Couture and Supermodel Competition, which was held in the courtyard at J-Line Fitness.

In addition to prizes for the best the evening gown and fashion couture, a modelling contract with a top American agency was also up for grabs. It was a night of excitement as the contestants showed off their evening gowns and couture creativity.

Organisers said the night proved to be quite the spectator event, as guests were treated to the contestants coming down the runway in outfits that characters such as Disney’s Cruella de Vil, a sea goddess, a pirate, a floating angel and a floral diva.

The show demonstrated that there is no shortage of talent and originality in the Bahamian design forum, MTBI officials said.

Local designers such as Patrice Lockhart, Judy Deleveaux, Javotte’s House of Couture and many others created the couture ensembles for the competition.

Anthony Smith of the MTBI team said the pageant’s fashion couture segment is known as one of their biggest preliminary competitions with the young ladies showcasing and modelling in their evening gowns and couture outfits.

“We do this every year and this year we included the supermodel part of the competition because we have partnered with Major Model Management agency in New York,” he said.

Major Model Management (New York), a prominent US-based modelling agency, will select one contestant from the Miss Teen Bahamas International pageant as the winner of the supermodel competition. This lucky young lady will receive a one-year modelling contract with Major Model Management, inclusive of employment with MMM, fashion wardrobe, cosmetic supplies, professional photo shoot and model portfolio, and the opportunity to walk the runway for major designers in the US and Europe. The winner will be announced on the night of the actual pageant, June 1 at the Rainforest Theatre, Cable Beach.

Even though patrons have to wait to hear will be named the winner of the Major Model Management prize, there were some lucky ladies that walked away with titles last Saturday.

In the evening gown competition Cadisha Knowles (Miss Harbour View Villas Resort) took first place, Briealessa Wilson (Miss Bahama Grill) came second and Tia-Simone Thompson placed third. “These are all the same ladies that will be in the pageant itself, but this was just a competition apart from it. We have a lot of the young ladies that say they are interested in modelling,” Mr Smith said.

“Our first queen, Vanessa Leach, she was more of a modelling type and she is pursuing modelling while in College. We seem to attract those kinds of girls, and although they are the model type we also have a lot of academically and community service oriented ladies that just want to put their platform out there.

“The ones that are pursuing modelling, there are not many opportunities for them, so we have provided that by partnering with this modelling agency. We have also been successful in gaining partnerships with other major organisations like (the hair care company) Mizani. The young ladies, a few weeks ago, did a Mizani commercial. They are going to be offering a one-year partnership with the young ladies. The Mizani girl will be featured in their 30-second AD commercial. The winner is going to be announced the night of the pageant.”

On June 1, the contestants will take to the stage one final time to find out who walks away with the prestigious title of Miss Teen Bahamas International. The chosen contenstant will go on to represent the Bahamas in July at the Miss Teen International pageant in Jacksonville, Florida.

For more information about tickets and/or the pageant, contact the MTBI at 393-0403/676-5573; e-mail dtnmagazine@gmail.com or visit their page on Facebook (Miss Teen Bahamas International).