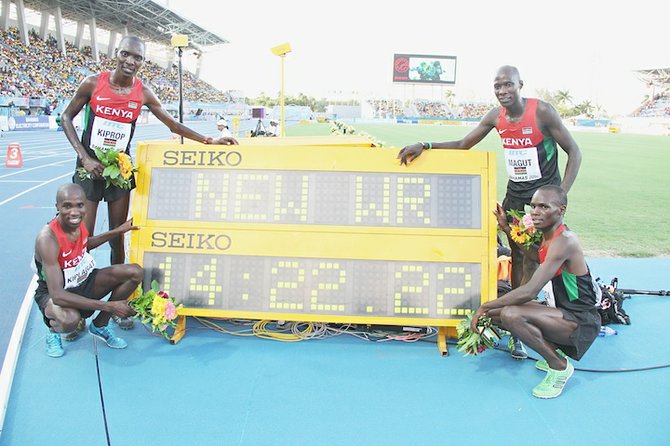 THEY came to the World Relays with a single mission in mind - to set new world records and leave an indelible mark on the Bahamas and the inaugural edition of the event.

Team Kenya walked away from the two-day competition with a pair of new world records and wins in three of the four middle distance relays contested over the two-day meet at the Thomas A Robinson National Stadium.

The seldom seen 4x800m and 4x1500m events took centre stage as the backdrop of Junkanoo music inspired the athletes in their race against the clock.

For each world record, the Kenyans took home an additional $50,000 world record bonus on top of their $50,000 first-place prize money.

In the men’s 1500m, the team of Collins Cheboi, Silas Kiplagat, James Magut and Asbel Kiprop held off chief rival the United States and Ethiopia to set a new world mark in 14.22.22s.

The United States finished in a new national record of 14:40.80s in second place.

“It is great motivation to represent Kenya and be a part of a team. The world record was ours and our times were not that fast in the beginning, but we managed to break it. I love being in the Bahamas, but now it is time to prepare for the Commonwealth Games and the Continental Cup,” said Kiprop.

Cheboi allowed the Ethiopians to lead on the first leg before the Kenyans eventually assumed control for good.

Each of the remaining members of the quartet raved about the encouragement from the home crowd.

Cheboi said: “The crowd was amazing and they encouraged us all the way through. It was an amazing feeling.”

Magut said: “I am really happy to be a part of this world record breaking team. We enjoyed ourselves in the Bahamas, and enjoyed this crowd. You can expect more from Kenya.”

Kiplagat said: “We had a mission today, to win and break the world record. Without this crowd, it would have been impossible to break it. We did it and we will be back next year.

It was the second world record for Kenya after the women’s 4x1500m team highlighted day one with their record-setting performance in a time of 16.33.58s.

The Kenyans came in as the favourites as they recently lowered the world record mark in the event just last month at the country’s national trials for the World Relays.

At the trials in April, Cherono, Jelagat, Ann Karindi Mwangi and Perin Nengampi finished in 17:05.72s, two seconds faster than the time set by the University of Tennessee in 2009.

Nengampi was not a member of the pool for the World Relays but the group included Kipyegon and 2012 World Indoor champion Obiri.

“We have a strong team and we delivered today. We felt the music throughout the race and we felt the support of the crowd,” Obiri said.

Cherono said: We are excited to have broken the world record for the second time this year. I am so happy and proud of my team and the time we ran today. It was important to win for our country.”

Jelagat said: “I am excited with the result and the spirit of our team. The atmosphere was great. Mercy and Faith ran very well and I just ran to stay in the lead.”

“I’m very proud of our team. We are happy about winning the first gold of the first World Relays,” Kinyor said. “Our plan was just to run our race, and our goal was to win, and we managed to execute our plan.”

Marcel Lewandowski said the second place finish added to the 800m legacy of his country.

“It is a good feeling to take my flag around the track with my team members. I didn’t expect to win the silver medal. If we had 20 more metres, we could have caught the Kenyans,” he said. “We only practiced hand-offs for the first time [Friday]. We have a very strong tradition in 800m in Poland and we want to keep it. I am really proud of my team.”

The United States prevented the Kenyan sweep in the distance relays by taking first place in the women’s 4x800m final.

The US took first place in a wire to wire victory in 8:01.58s and a new national record.

Martinez credited the team’s race plan when she said: “We all had a plan and everybody executed perfectly. I had the best time in the race. I know what I am capable of and did just that.”

Price took an early 10m lead for the US and posted a split of 2:01.00s. “I’m really happy with the gold,” she said. “You’re only as strong as your weakest link and we were all strong today.”

Second leg Geena Lara said: “We all came with the same goal in mind. We just focused on what that was, and made it happen. It’s my first time visiting the Bahamas and I’m enjoying every moment.”

Despite the loss, Kenya’s Janet Jepkosgei Busienei said she was proud of her team and the entire Kenyan effort at the meet.

“We knew it would not be an easy game. The US team was very strong,” she said. “We are are happy with silver and we will come back for gold next year. I am happy to run as part of a team with Eunice and young athletes. I am proud of what our team members have accomplished in this championships.”