Vat Will Be Delayed Until January, 2015 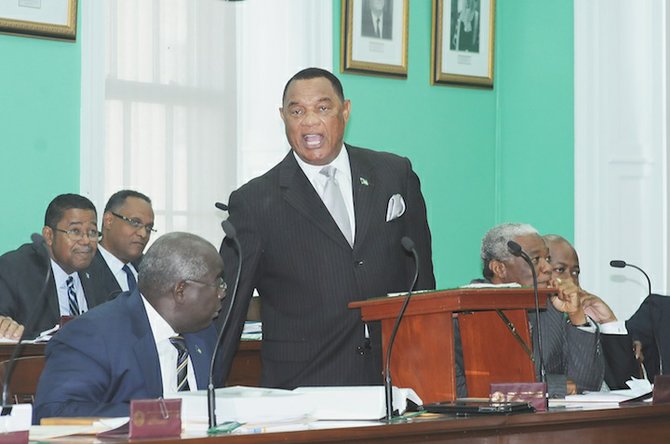 Prime Minister Perry Christie announced today that VAT will be delayed until January 1, 2015 and brought in at a rate of 7.5 per cent.

In his Budget communication, the Prime Minister said: “The key features of the proposed Bahamian VAT are as follows:

NO NEW TAXES. YOU GUYS WASTE MONEY LIKE IT'S TOILET PAPER. WHAT THE HELL THE GOVERNMETN NEED WITH 8 BRAND NEW CARS IN BIMINI? AN ISLAND WHERE IT IS IMPOSSIBLE TO DRIVE MORE 1 1/2 MILES IN ANY DIRECTION? THE LIST OF STUPID SPENDING GOES ON AND ON. YOU SPEND STUPIDLY AND YOU REFUSE TO COLLECT WHAT TAXES WE HAVE NOW AND YOU WANT MORE? YA'LL BETTER BUILD A NEW PRISON. I'D RATEHR GO TO JAIL THEN PAY YOU AMATUERS ANY MORE MONEY....

We need a Freedom of Information Act implemented.

PM Christie you won because you wanted to be different than Ingram. Let me tell you, you did it. This is your legacy, THE WORSE PM IN THE BAHAMAS. If you can't budget and make money with all that the Bahamas is blessed with, then your are not fit for PM. You want to tax 350000 in which may be 50% of them are working while the others are too old, too young or unemployed. Are you just stupid or are you crazy.......... But again, the crazy Bahamian people voted you in so they get what they deserve. I rest my case.

I totally agree with you.

Thanks KM. this guy is not wasting any time because he knows he will never get in office again.

Bahamians need to BOYCOTT all taxes until the government comes to its senses. The POWER of the PURSE rests with those who PAY the taxes. The Minster of Finance can only spend what the citizens contribute ....... he cant borrow $2 million for the budget!!!!!!!!!!

We need to make demands on this government before we lose the little that we have.........

http://thetribune.media.clients.ellin...">House members facial expressions say it all! by Emac

Let the layoffs begin! The smart money has already left the Bahamas and there is no way the dumb money will ever fill the hole dug by years of corrupt incompetent FNM and PLP governments. The Pritchards, Lightbourns, D'Albenas's, Pyfroms, Symonettes, Thompsons, Rogers, Hazelwoods, Grahams, Holoweskos, Bethels, Solomons and so on have long ago activated their contingency (exit) plans knowing that it will soon be difficult for most to come by tooth paste, soap, deodorant, detergent, candles, etc. in the Bahamas. Our successive corrupt Bahamian governments and their nouveau riche corrupt business cronies are guaranteed to be the ones left holding the proverbial empty bag....as it should rightfully be!

A sensible compromise but of itself it will not be enough. Government needs to enforce Property Taxes AND reign in the reckless spending by many of its cabinet ministers. The culture on non-existent jobs for the boys must also end immediately. All of this may still be too late to avoid a credit downgrade in the short term.

I am still waiting to see an outline of proposed budget spending. I don't understand how you want to tax the people but don't want to be transparent in what you are spending the money on. I am sure many Bahamians would not mind paying VAT if there was a credible reason for it. If all other avenues of collecting resources were exhausted and justifiable ends were still not being met then I could get on board with VAT.

But we don't have any visible proposed spending plan, we don't enforce and collect the tax revenue we have now and the government's spending is not justifiable. So explain to me why I should give my hard earned money to a crack head (government) knowing full well they only using it to feed their habit (poor budget and corrupt spending).

The Prime Minister should be referred to in a respectful manner at all times...Needless to say that we must come to understand that the disrespectful tone we use here, with regards to the PM and others in high office is unacceptable. One must come to realize that whatever the PM said in opposition was just election fever. Now as the PM he must come to realize the facts as they are. But the disrespectful attitude came towards the former Prime Minister, when he was in office, while Mr. Christie said or did nothing to stop it. Believing in the Bahamas mean that we must come out against all the negative forces. I would love to see him( Mr. Christie ) coming out in the defense of the former Prime Minister Hubert Ingram , when the younger set of politician become disrespectful to anyone older or more mature in this arena. Just remember the world is much smaller than it was due to the internet .............plus our kids learn what we teach!!

Unacceptable by whom? When you run for public office you open yourself up to criticism from those who you should be serving with the best of your ability. Be it nasty, satirical or whatever. Politicians get what they deserve no matter what side of the fence they belong! Of course if I meet the PM in person I wouldn't call him an ass. I would address if as Mr. Primer Minister, even though I would be thinking the former.

Send to the via email:(arabfinancialcorporation@yahoo.com.sg)

So he is tabling VAT to come online January 1st...when there is the most turmoil in the retail trade, people buying heavy and hedging on Christmas sales, New Year's chaos, and we are meant to jump right in to VAT and expect it all to work...didn't our dearly paid expert consultants say no earlier than April 2015...and even then only after a Freedom of Information Act was in place? Guess all that money we paid them just fell on the deaf ears of our idiotic politicians...and I mean that with full disrespect 'ChefSmith'.

The given date suggest that it is subject to change...January 1st, 2015, New Years Day...smh...it just stupid, idiots (sincerely)

Someone need to kill all dese fuck shots in government!

This morning I woke up refreshed ready to tackle the new day and prayed that there would be nothing that will affect my day. Boy was I wrong! Why would you Mr. PM delay something that should be null and void?! I need you to cancel this implementation until you have provided those 7,000 jobs that you promised. Until then, I suggest you come up with a new strategy to make your money!

I must say, Bahamians need to stop voting party line. This is what happens when ya vote party line and don't listen to the garbage that the candidates are saying.

Hypothetically speaking these number could be a little off.

Jamaica, Trinidad, Guyana and where every else this VAT is working is a night and day difference from the Bahamas. There populations are about 3 to 5 times largely and they don't depend on Tourism.

So for this stupid PM to come up with such a ridiculous piece of BS legislation is just beyond me. Bahamian people wake the hell up before you start fleeing your country. If the government that you all just voted in is inept then demand a recall on the election or demand and early election and vote this Jack Ass out. Because only you and you alone will face the music. These guys are set they have money and they will escape paying the taxes.