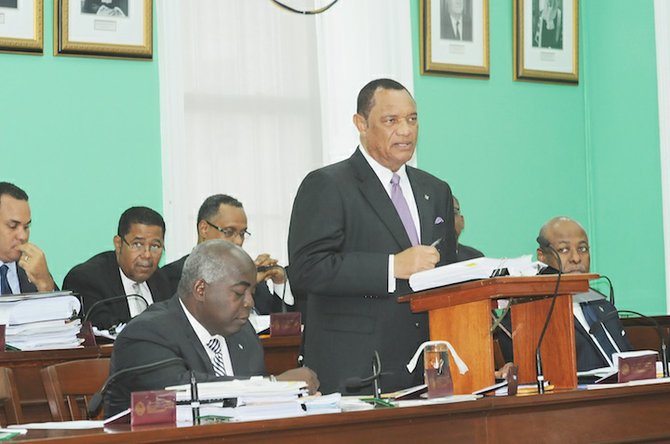 PRIME Minister Perry Christie affirmed his government’s intent to regulate and tax web shops, telling the House of Assembly yesterday that whenever the proposed taxes on the underground sector are introduced, they will be retroactive to July 1 this year.

The government anticipates taxes from web shops to bring in a revenue intake of 0.14 per cent of GDP in the next fiscal year and beyond, Mr Christie said.

The bill to effect web shop regulation, an amended Gaming Bill, will be debated in Parliament once the 2014/2015 budget debate is finished, Mr Christie said.

Minister of Tourism Obie Wilchcombe, who has responsibility for gaming, told The Tribune that the government is considering taxing web shops at a rate of 15 per cent – a figure he said was proposed by the Ingraham administration.

The government has engaged the firm AG Consulting to advise on how to properly regulate the web shop sector.

“It is expected that these comprehensive and necessary reforms will result in considerable benefits to the public purse and the Bahamian economy, the creation of many new jobs, a controlled number of web shop gaming operations as is the case with casino operations, and upholding of laws and international obligations in accordance with best practices,” Mr Christie said as he gave his 2014/2015 budget communication.

“As well, after extensive and due consideration and discussion, we are also moving forward with the regularisation and taxation of web shop operations in this country.

“Conservatively, we expect this to provide a revenue intake of some 0.14 per cent of GDP in the next fiscal year and beyond.

“I want to be clear on this matter to the effect that the regulatory and taxation regime that will be introduced for the web shops will feature very stringent and demanding standards in terms of levels of controls and accountability.

“To that end, the government has engaged international experts who will advise on an appropriate policy and legal framework for the sector. I also wish to advise that the taxation of the web shops will be retroactive to July 1, 2014.”

Afterwards, Mr Wilchcombe told The Tribune that the final details on web shop regulation should be done by next week.

“That’s being worked on right now, over the next six, seven days we’ll have it all completed,” the tourism minister said.

“We have the experts from the AG’s Office and others looking at it right now to ensure that we arrive at a workable rate,” Mr Wilchcombe said. “We’re looking at what the previous administration had advocated, they advocated 15 per cent. Whether we go that high we’re not sure yet.”

Mr Wilchcombe said the government has not yet decided if it will tax customer winnings or the net or gross profits of web shops.

He said the government’s proposed regulations will impose strict operating guidelines on the sector. This will likely force the closure of many of the newer, smaller operations.

“The market will be cut back some and also a number of things will be predicated upon your existence, including your bond, so you have to think about how you can survive in a business that is regulated,” Mr Wilchcombe said. “Right now many companies are out there because they are unregulated.”

In 2012, Mr Christie said web shops could face up to $1m in licensing fees coupled with a performance bond in a bid to award certification to a small number of licensees if the sector became regulated.

The controversial Gaming Bill was shelved in October last year following an outcry from Progressive Liberal Party (PLP) backbenchers over elements which discriminate against Bahamians while giving more opportunities to foreigners.

“For the sector, the bill that is present before Parliament will create a level playing field and bring the Bahamas’ gaming industry into the first world and put us into a very competitive position and also allow us to attract gamers to this destination,” Mr Sands said.

Let’s see, in the States this most regressive of taxes, which is imposed disproportionately on the poorest of citizens generates 100% of net revenue for government, state and local.

Here in the Bahamas, where we have far more poor, who will pay this tax far more disproportionately, we will capture 15% of net revenue for the government.

Oh, that’s OK, nothing to see here, because that paltry rate going to government was suggested by the former administration.

Is this not the same former administration that the current administration alleges did everything and anything evil and bad, that has resulted in horrible outcomes for the Bahamas?

Why then does this rate setting idea from the former administration represent some kind of excuse for the failure to run a national lottery, putting all these illegal operators out of business.

I guess I forgot where the current administration gets its campaign contributions.

These webshops are another "tax" on the poor. It's no accident that 8 different shops are cramming themselves on the same street in one poor neighbourhood. And if you look at the constituency, even more shops are set up less than a mile away. Why aren't these shops set up on Sanford drive, Sandyport, Westridge where the people who actually have disposable income live??

All of the soon to be legalized numbers houses should be levied a punitive foundational Business Licence fee. This fee should be large enough to eliminate much of the profit these operators have made on the back of ILLEGAL activities. Having paid their dues they would then be free to trade legally going forward. If government fails to claw back much of this profit then what message does it send to Joe Public?

A National Lottery should be established by a FOREIGN organization (with Bahamian participation) that knows what it is doing as this could earn valuable income for sport and other community interests.

People with disposable income generally possess that income because they don't throw their money away in the false belief that you can make money playing numbers on a regular basis. Personally, I have nothing against anyone who wants to play numbers or any other form of gambling but do it for fun with money you can afford to lose!

MR. PM: YOU DON'T TAX ILLEGAL ENTERPRISES, YOU SHUT THEM DOWN BY ROUNDING UP AND PUTTING IN FOX HILL PRISON THE DESPICABLE CROOKS WHO RUN THEM. YOU THEN CONFISCATE FOR THE BENEFIT OF THE PUBLIC TREASURY ALL OF THE TANGIBLE ASSETS OWNED BY THESE CRIMINALS AND THEIR ILLEGAL ENTERPRISES. YOU CAN START WITH FLOWERS' OFFICE BUILDING LOCATED ON WEST BAY STREET NEAR NASSAU STREET. GET A DECENT SET OF GONADS AND ENFORCE THE LAW MR. PM........THE REFERENDUM WAS LAWFUL AND THE PEOPLE HAVE SPOKEN! STOP YOUR FOOLISHNESS IN TRYING TO JUSTIFY THE CONTINUED EXISTENCE OF THE NUMBERS RACKET BY PROPOSING BOGUS LEGISLATION AND CLAIMING THE ILLEGAL ACTIVITIES ARE A GOOD SOURCE OF TAXABLE INCOME. YOU MR. PM KNOW FULL WELL HOW MANY CHILDREN IN THIS COUNTRY GO NEGLECTED EACH DAY, WITHOUT FOOD, WITHOUT CLOTHES, WITHOUT NECESSARY PROPER MEDICAL ATTENTION, ETC., SIMPLY BECAUSE ONE OR MORE OF THEIR PARENTS FEEL TRAPPED OR ADDICTED TO PUTTING THEIR HARD EARNED MONEY INTO THE COFFERS OF A HOOD LIKE FLOWERS. SHAME ON YOU MR. PM AND SHAME ON ALL OF YOUR POLITICAL COHORTS WHO TOO SHOULD KNOW AND DO BETTER.

Wow... that is a lot of shouting, but you are absolutely correct.

Why was the July1, 2014 date picked? Surprisingly, none of my Comrade bloggers have questioned what more may be behind PM Christie's affirmation in the House of Assembly that taxes on the "underground" sector (never said they were criminal operations) will be retroactive to July 1, 2014? Not even a whimper to this most intriguing time-frame from the Leader of Her Majesty's Loyal Opposition in the House?