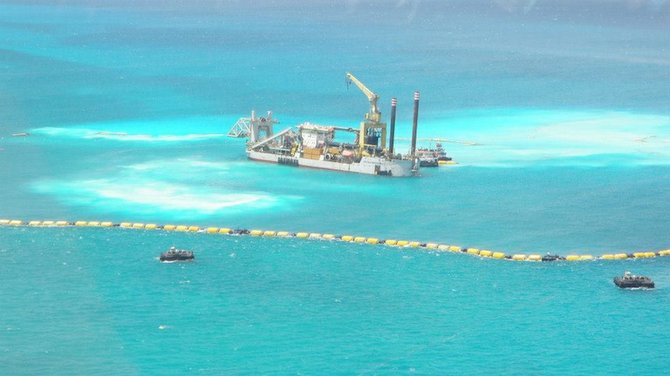 A SUPREME Court Justice discharged the Privy Council’s injunction on dredging activities in Bimini yesterday, but important documents related to the Resorts World Bimini project have still not been disclosed to The Bahamas National Trust (BNT) and the public.

His ruling came a week after the Privy Council granted the Bimini Blue Coalition’s (BBC) injunction request, ruling that before dredging could continue, the developer must prove to the Supreme Court or Court of Appeal that a permit it obtained last week Thursday under the Conservation and Protection of the Physical Landscape of the Bahamas Act (CPPLB) was valid.

The Senior Justice also ruled that the BBC must pay all the expenses of the government and the developer, both before the Privy Council and the Supreme Court.

Ms Malcolm said: “We are pleased with the ruling and will resume dredging operation today, resulting in many Biminites immediately getting back to work.  The people of Bimini know that Resorts World Bimini is an enormously positive development for the economy and ethos of the island, and we are hopeful that outside special interests will finally cease their litigious efforts to stand in the way of a project that the local people so clearly want. We now look forward to completing the construction of the cruise pier expeditiously so that we can open the full destination resort, and continue to provide many jobs and opportunities for Biminites.”

Nonetheless, Eric Carey, executive director of the Bahamas National Trust (BNT), told The Tribune yesterday that his organisation has not been given important documents on the project, which will see the construction of a cruise ship terminal, 1,000-foot pier and man-made island.

Earlier this month, the press revealed that the government granted RWB permission to dredge four times the amount of material than had previously been disclosed to the public.

Following this revelation, the BNT called for the government to disclose to the public an amended Environment Impact Assessment (EIA) and Environment Management Plan (EMP) which would address concerns raised with the expanded dredging.

However, Mr Carey said yesterday: “We have not received the documents. The minister said he will have his staff contact us to set up a meeting, but we’re still waiting to have that meeting.”

In fact, on May 9th, Environment and Housing Minister Kenred Dorsett refused to answer reporters’ questions about controversial construction and dredging in Bimini during a press conference he called to dismiss concerns about dredging in Buress Cay, Grand Bahama.

At the time, the Minister said: “I think that we will address the issue of Bimini at another time, because I think it requires a detailed conversation with the people of the Bahamas.”

Nonetheless, dredging first began on May 16th and there has been no attempt by Mr Dorsett or anyone else in his government to officially address dredging concerns in Bimini.

In addition, emails with questions sent from The Tribune to Mr Dorsett’s public relations officer have not been acknowledged.

As for yesterday’s Supreme Court ruling, Mr Carey said it does not mark the end of concerns over the project.

“This isn’t going to stop concerned folks from putting pressure on the developer to prevent the types of abuses that have been taking place,” he said. “The injunction was whether the permits were valid or not. Our concerns are still with the lack of apparent safeguards, with reefs being laden with silt, with silt spreading along the ocean.”

Referring to aerial photos of dredging taken two weeks ago which showed plume spreading across the ocean, Mr Carey said: “The now famous photos of silt pouring from out of the curtains has raised valid concerns. Pictures don’t lie; they were not doctored, not photoshopped. People will still hold the developer accountable. What the injunction did and the fact that dredging was stopped for five days surely proved to people that they could go to the court and be heard.”

He said: “We understand that the former minister of environment, his company is advising on the environment management plan; we’re certainly going to reach out to Dr Earl Devaux and find out how serious this project will be managed and how his company is able to prevent the instances of abuse that we’ve seen.”

The permits to world resort were issued under the table during this court case. None of this was in Good Faith and in waiting until Privy was in session they've Abused Discovery in attempt to present information in waives to benefit, therefore World Resort and the government still owe Bimini Blue Coalition. http://www.tribune242.com/news/2014/m...">http://www.tribune242.com/news/2014/m...

Our Comrade Biminites along with Bahamaland's Central Government, have since 1968 missed-out on the tourism economic boom which lies but a stone's thrown off the shores of the Islands of Bimini. I have long been a student of the Lost City of Atlantis being in Bimini's waters.

Bimini is been sold out to the foreigners and will be destroyed for a "bowl of porridge" ..... SAD and the Biminites are either too ignorant or shortsighted to see what is been done to their island by Obie and his mercenary crew

Bimini is much too damn important to ALL Bahamalanders and the entire world, so if Biminites want to continue their long history of selling off chunks of it to any johnny-come-lately foreigners for pieces of silver, ALL we of Bahamaland and the world, need to step-in before the foreigners ruin these islands.

Tourism money talks but it can also walk away from our Bahamaland. Comrades this is indeed an unique time to collectively challenge all Bahamalanders and residents to ask ourselves what in the hell are we doing to our tourist economy? Tourists have always been attracted to the Bahamaland for who we as a people were, not the Bahamaland or peoples we've become. You can open all the damn mega Baha Mar and Bimini Word Resorts the hundreds and billions of foreigner dollars can construct but if you allow a funeral to be held for the merchants and charm of Bay Street, while the rental cars, scooters and bicycles remain parked and our sandy beaches and native corner stores go empty out of the fear instilled by the US government who rightly advise their citizens and the rest of the world's travelers who also rely on the US government's travel advisory alerts, we and our are children and grandchildren are doomed. Fear will not facilitate tourist flowing to locally to the native owned restaurants dining experiences but is killing the entrepreneurial spirit? Comrades we can run out and buy business insurance. We can buy death insurance but you can't buy protection against the thugs coming into your business or kill you or your employees or family. Comrades how can we rob our Bahamland who has given us so much for free over generations. Bahamaland is not asking for us to lavish Her with our materialistic stuff or things. She asks only that we remember who in the hell we have always been known and so respected around this big world for as a peaceful, caring, Christian, generous and loving Bahamalanders.

The Privy Council...this one is for general crazy. The irony of it is, we cuss and grumble when death sentences go to the Privy Council...and we abide by what they say and no one gets hanged. This case goes to the Privy Council, we get a favourable ruling, which is then just overturned back in our own court systems. While I am GLAD there was a ruling by the Privy Council in this case...anything to try to stop the dredging, I don't care who by, I'm for it...but seriously, we need to do away with the Privy Council. We abide by it when we want, over rule them when we don't, it's just another silly layer of legal fees and confusion. With the exception of delaying the disasterous dredging for 1 week, what 'good' has the Privy Council done for us? Not really a rhetorical question...if someone has some case studies in which the Privy Council was a definite GOOD CAUSE...let's hear it.

Don't blame anyone except our crooked politicians and Judges How do you legally over-rule the Privy Council?????