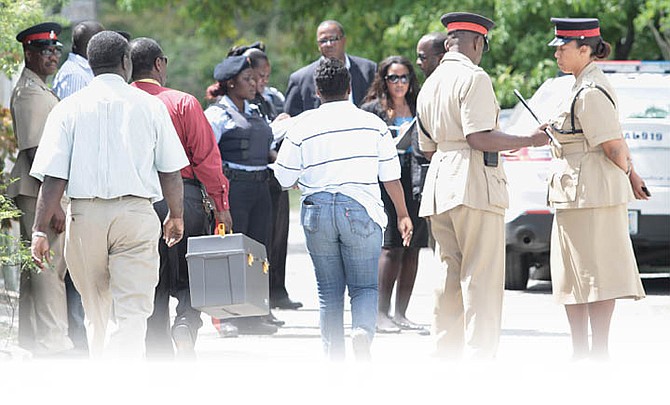 While the government has remained guarded over new crime fighting strategies which were formulated last week, a noted psychiatrist gives his take on what we can do to stem the tide of violent crime. Tribune News Editor Taneka Thompson reports.

We are a nation held hostage by a small group of young, uneducated, violent, bloodthirsty thugs.

There is no need to sugar coat the realities of living in Nassau or cloak the brazen violence displayed frequently on our streets in some politically correct euphemism.

Until we get to a tipping point where the almost daily carnage in our country’s capital begins to subside, law-abiding citizens will continue to live in fear in and outside their homes.

Noted psychiatrist Dr David Allen, of the Renascence Institute, has crafted a report outlining a litany of recommendations for crime reduction and has presented this to the government.

“The Bahamas is facing burgeoning rates of murder and violent crime, creating an atmosphere of fear, hopelessness and fatalism,” he notes in his report, which was completed this year.

“Traumatised and numb, some people accept the status quo saying, ‘Murder is a way of life, especially in Nassau, and nobody can stop it!’”

Dr Allen has found that most of the country’s murders take place in high poverty areas, mostly involving black males aged between 19 and 25.

“The murder rate is associated with increasing rates of domestic violence and unabated attacks on women, ranging from assault, rape and murder,” his report says. “At the same time, galloping rates of child neglect and abuse contribute to the development of traumatised young men who are at risk of becoming involved in future of acts of violent crime and murder.”

This killing is the reaction of the depressed, displaced Bahamian male he argued, who feels out of touch with society. They are “socially deprived” and raised by mothers who were drug addicts or absent and fathers who ignored them.

“A lot of these young guys, they don’t care about dying,” Dr Allen said in a recent interview with The Tribune about the recommendations in his report. “They don’t want to die but they don’t care about dying, so if you look at them, they’re either in prison, dead on the blocks with drugs or they are dead biologically. So what we are facing is a young male Bahamian male holocaust. How can we build a country like that?”

Dr Allen has come up with a three-tiered approach to crime fighting which outlines immediate, intermediate and long-term policies.

A key element of the first tier is to “define violent crime as a public health problem” and create a National Advisory Council on crime that would periodically evaluate episodes of violent crime and analyse data for the government and the public.

The group would also advocate for police and victims; enhance public accountability; raise funds to fight crime and research criminals’ acts to provide insight into future acts of violence.

“A young man who feels he is dead already is dangerous to you. You’ve got a job, you’re intelligent and I have nowhere to go, so if you have something I want I have nothing to lose. I may break through your door at night, I may get killed, I’m gone anyway, and so what do you do?

“We have to provide hope for them – the police can’t think through all these things, they are fighting crime,” Dr Allen said, underscoring the need for the special independent council.

He also recommends, among other things, that the government engage foreign consultants with success in crime reduction; establish a residential programme for at-risk youth; create a mandatory national service programme; a mandatory curfew in high crime areas and providing psychological support for officers.

His long-term strategies include increased law enforcement recruitment and developing a national campaign on depression.

“These guys are depressed,” he added. “Depression means you don’t care about anything. Once you have a gun, the gun is the anti-depressant. They tell you ‘when I have that gun in my hand, Nassau belongs to me.’”

In the face of crime and the fear of crime we need, as Dr Allen has suggested, a national movement that will embolden right thinking citizens with the resolve to take our streets back from these ne’er-do-wells.

We cannot devolve into a Wild West society, each citizen armed and ready to do battle when someone encroaches on our property or assails us in some way. Yes we should have the right to defend ourselves from external threats, but more guns, legal or not, (for which some have advocated) and more violence will not return Nassau to the idyllic paradise it once was.

We also need an administration that is strongly committed to restoring law and order and not just pay lip service to win votes.

While casting blame for the rising tide of crime will not solve the problem, it has to be noted that the Progressive Liberal Party (PLP) sailed into an election victory in 2012 on the premise that it had the answers on the hot button issue while the Ingraham administration did not.

The party erected billboards, many in tourist hot spots, which screamed that there were more than 400 murders during the Ingraham administration.

While in opposition, Prime Minister Perry Christie promised that his party would be tougher on crime than the Free National Movement.

Mr Christie added: “No one should have to live in a neighbourhood where fear and menace rule the streets. We are going to flood these areas with police, with resources and support.”

The words were comforting to a public that was tired of crime and frustrated with former National Security Minister Tommy Turnquest and his colleagues, who could not get a grip on the problem.

Now nearly three years into its term in office, the PLP can no longer blame the FNM for the violence that has Nassau in a vice grip.

Last week, the outrage over senseless killings came to a head when Blair resident Andre Cartwright was shot dead in his home by armed thugs who barged into the home he shared with his elderly parents.

The young suspects, one who was only 18, shouted that they were police officers before trying to gain entry into the home around 1.40am on Tuesday. Three men kicked in the front door and when Mr Cartwright heard the noise he got his licenced shotgun and went to investigate. He encountered the three suspects, one of whom was armed with a handgun.

There was a brief exchange of fire, which resulted in Mr Cartwright being shot multiple times. He died at the scene.

That night another man was killed in Fox Hill. The victim was shot by gunmen who accosted him as he rode a bicycle.

“You should be assured there is no greater priority for this government at this time than to broaden and intensify the war on crime so that no citizen need to have any fear of falling victim to crime while in some public place, at their place of work or within the sanctity of their own home,” he said.

But the Bain and Grants Town MP did not divulge these initiatives saying it would be “foolhardy” to reveal them at this time.

“We will give you that but not today,” he told reporters last week. “We don’t want to talk too much about what we are going to do. We want to do (what) we have to do and see the results.”

Perhaps it was best that Dr Nottage keep quiet on the government’s plans, because we have heard the tough talk on crime before. Last December, Mr Christie’s Cabinet held a special meeting on crime and afterwards the government outlined more than 20 ways it hoped to get a hold of the situation.

At the time, the Prime Minister said that the government would be relentless in its crime fight. However once the issue faded from the headlines, little was said thereafter about these tough measures while the problem persists.

Now we have to wait and see if concrete strategies will emerge from this administration to fix the problem.

Would be nice if all that bank bailout money that was not approved by the People went instead to the atrocious educational system. That would have helped secure a future for many bright Bahamians. But hey, we still have the Bank. Priorities people.