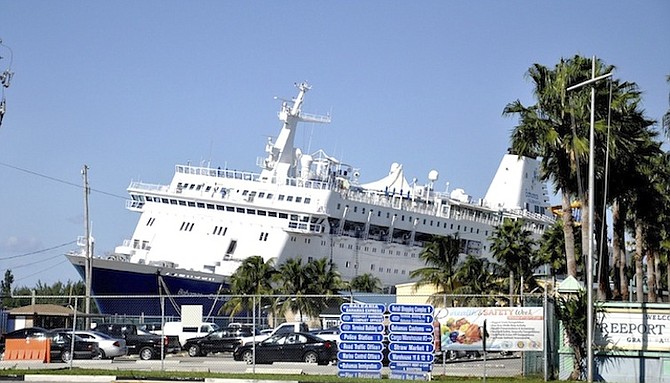 THE Bahamas Celebration cruise ship, in dock in Freeport after being holed shortly after it departed Grand Bahama for Florida on Friday, is vital to the local tourism industry as it brings nearly 30 per cent of the overnight visitors to the island.

The ship – which reportedly brings between 3,500 and 4,000 cruise passengers weekly – has been out of service after it hit an unknown object in the water on leaving port. Celebration Cruise Line cancelled its scheduled cruises on Saturday and yesterday and has said it would refund passengers booked for cruises to Grand Bahama.

On its website yesterday a message reads: “The Bahamas Celebration is currently in dry dock. No sailings first two weeks of November.”

Betty Bethel, general manager for Tourism in Grand Bahama, said the cruise service is vital to tourism in Freeport. Although some in the department had estimated that the ship accounted for 30 per cent of overnight arrivals, Ms Bethel could not confirm that. “We were trying to determine the numbers,” she told The Tribune yesterday.

According to reports, passengers stay on the island from two to six nights, spending in hotels, restaurants, stores, taxis and other recreational activities.

David Jones, president of the Grand Bahama Taxi Union, said the situation with Bahamas Celebration has so far not significantly affected cab drivers in Freeport. “We have been minimally affected by it because we carry only a small amount of passengers from the Celebration ship – about 80 per cent are transported by a local tour bus operator,” he said.

“But it is not only about us, it is about the economy. There are many local straw vendors, souvenir stores and other businesses that are really going to be affected by what has happened,” he said yesterday.

The Baleria Express, the fast ferry service between Fort Lauderdale and Grand Bahama, may experience a temporary increase from the local Bahamian market.

The Bahamas Celebration is docked at Freeport Harbour, where salvage crews have been assessing the damage. A “small hole” on the port side amidship has been repaired, but the vessel is listing by about 10 per cent.

James Verillo, the cruise line’s executive, told The Tribune over the weekend that a team of professionals is onboard dealing with the situation. The cost of the repairs is not known, nor how long the vessel will be out of commission. The Tribune attempted to contact Glenn Ryerson, senior vice president of sales and marketing, Bahamas Celebration, yesterday but has yet to receive a response.

Freeport Harbour’s channel has a depth of 16 metres and is one of the deepest in the region. At about 9pm on Friday, the ship hit something in the water about 200 yards outside the port.

The vessel shook and lost power briefly. Alarm bells went off and emergency procedures were initiated. The 960 passengers onboard were told to put on life jackets. No one was injured. The ship returned to port, passengers were evacuated and they returned to Florida on the Bimini SuperFast ferry on Saturday night. Celebration Cruise Line started service from the Port of Palm Beach to Grand Bahama in 2010. The 600-ft vessel leaves Florida on Mondays, Wednesdays, and Fridays and can take up to 1,250 passengers.