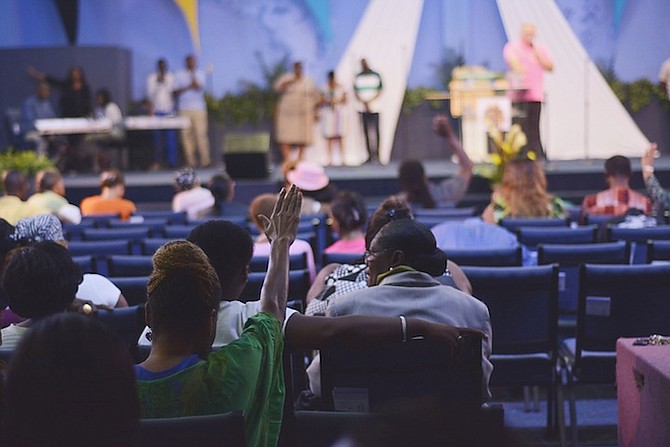 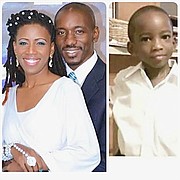 Pictures posted to Facebook in tribute to crash victims Lavard and Rudel parks and their son Johnnan.

TEARFUL mourners gathered at Bahamas Faith Ministries last night soon after they learned that Dr Myles Munroe died in a plane crash on Grand Bahama with eight others yesterday. 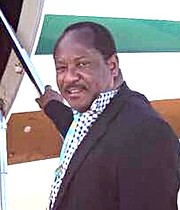 As somber parishioners converged at the Bahamas Faith Ministries (BFM) compound in New Providence, an anguished crowd had also gathered at the Grand Lucayan Resort in Grand Bahama, where Dr Munroe was to lead a conference today, hit hard by the news that his plane had crashed on its way to that island. 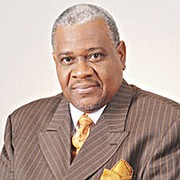 Pastor Burrows hailed Dr Munroe, 60, as a “visionary”, noting that he was the “foundation” of BFM.

BFM board members received numerous phone calls from people around the world offering their condolences following reports of Dr Munroe’s death, he said.

“We are all trying to console ourselves at this point in time because it is a terrible shock and it’s very difficult for everybody so we are just calling on the faith that we have,” he said.

“He is the driving force behind everything that we have done and he has been the inspiration for all of the people in this boardroom and for people worldwide.”

Hours before his death, Dr Munroe led a Sunday morning church service in Nassau and then later left for Grand Bahama where he would have hosted a leadership conference on that island, Pastor Burrows said.

The Tribune understands that as news of the tragedy spread, hundreds appeared at the site of the crash, the Grand Bahama Ship Yard, where they lit candles and prayed.

Before his death was confirmed, those attending the conference prayed and desperately sought information about his condition.

Tribune cartoonist Jamaal Rolle was at the conference to present a portrait to guest speaker and former Georgia Congressman, Andrew Young.

“A lot of the guests for the event didn’t know what was going on,” Mr Rolle said. “He was supposed to attend. People were dressed up but they just didn’t know what happened. From what I understand, his son and daughter are here and they’re distressed.”

Once they were informed of the tragedy, those attending the conference started screaming and crying, according to a video seen by The Tribune.

He urged Bahamians to remember that “God is in control”.

“Words cannot express what we feel tonight,” he said after a special service at BFM, where hundreds gathered last night.

“The whole country is devastated over what happened. Dr Munroe has really impacted the Bahamas and I guess the entire world in such a way that I don’t know who could fill his shoes. It is a loss for the country. I believe it is a loss for the nations of the world. Words could never be able to express what we in the clergy feel and I would imagine the members of BFM feel to lose not only the pastor and his wife, but the assistant pastor, Dr Richard Pinder and so many others who were a part of this ministry. For them to go to (at) one time will really be difficult in the days ahead, but we have the assurance that God will take care of us and that’s what all of us will hold on to.”

Dr Patterson said he spoke to Dr Munroe, 60, on Friday.

Dr Patterson said his last conversation with Dr Munroe was about getting church leaders together “to do something” for another pastor who recently died.

“His words to me was we are going to have to get some information and all the leaders of the church together so that we could get and pay our respects to one of our fallen colleagues. And now today he is gone and the note that he left I’m still going to deliver and I don’t know what else to say. It’s a loss for this country.”

He continued: “Bahamians, we are resilient people and we are going to bounce back. I believe the nation will remember the life of Dr Munroe and the work that he has done and left behind for us. I believe those works are going to go far in helping to change the mind-set of so many. And so, I just believe that God knows exactly what he is doing. And we don’t understand why, but I just know that God is in control. Just remember that God is in control.”

As news of Dr Munroe’s death spread, condolences from prominent people within the Christian community spread across Facebook and other social media websites.

Comrades the Tribune's blog pages are filled with many reasoning angles why unexpected deaths like the victims of the Lear Jet's crashing in Freeport occur. They have included "everything happens for a reason?" I only wish it were so black and white. I do believe that God gives and takes away but I have never been able wrap my head around the why? What I do believe is, God does not have a hands-off policy when it comes to timing our deaths? But exactly what His policy is may always remain a mystery to us earthlings? Comrade Dr. Myles and all the other victims should now have the answer?

Do you have a job? You sure have plenty of time to spew nonsense on a daily basis.

This is the real 911! Only in reverse. You dumb asses forget that JAH allows things to happen for a reason, and eventhough there may have been unethical rumors floating around about monies isn't money the same reason for Judas death and Jesus's capture, STOP! The ones that killed Jesus are still out there killing leaders like Myles Monroe and all you stupid, envious, little minded people are still crying out from the crowd the same damn thing "KILL EM" KILL EM" look beyond your ignorance and hatred!

**TO THE FAMILY AND CHURCH FAMILY OF DR. MYLES MUNROE: DR. MYLES MUNROE AND ALL ABOARD THE PLANE CRASH IN THE BAHAMAS WERE BORN FOR GREATNESS BECAUSE THEY LOVED AND SERVED OTHERS. I THANK GOD FOR THEIR DEDICATION FOR HELPING SAVE LOST SOULS . DR MUNROE AND RUTH LOVED PEOPLE AND IT SHOWS IN GOD'S MINISTRY ALL OVER THIS WORLD. I KNEW DR. MUNROE THROUGH BOOKS AND THE ANOINTING. YOU COULD ALWAYS FEEL THE LOVE FROM HIM. I WILL FOREVER FOLLOW THE TEACHINGS GOD GAVE HIM. SALUTE AND HATS OFF TO THEIR HEAVENLY HOMES...PRAISE GOD FOR THE TRUE ANGELS . LOVE AND PRAYERS TO ALL WHO LOVED AND KNOW THEM

Check out video on Mr Munroe it comforted me a lot. ( Dr Myles Munroe speaks of death on Jeff Koinange live show ) Youtube Check it out! Last month in Africa. He left us empty!

Rudel parks and their son Johnnan was such a vibrant young couple ,so sad. Watch them on Youtube ( Manifest @ Bahamas Relief for Haiti Telethon-CEFKydD1 Tus ) May they rest in peace!

Dr Richard Pinder really a down to earth man of God both for the young and old. Watch on Youtube ( The Kingdom Carriers Exclusive Interview pt 4 ) May his soul rest in peace!

Geez! Did Myles really end up on top of a mass of recycled dump material in a Grand Bahama junk yard?!! Most BFM members will undoubtedly be left wondering what to read into those tea leaves when it comes to their continued faith in whomever may try to follow in his mighty big foot steps.