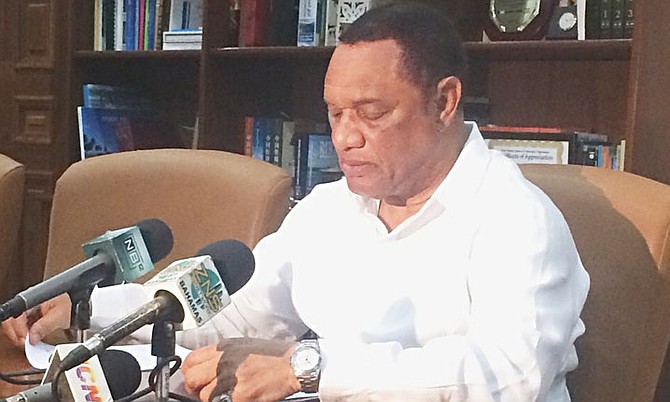 PRIME Minister Perry Christie last night said he was left “shocked” and “saddened” by the tragic death of Dr Myles Munroe and others who were on board his ill-fated plane.

“It is utterly impossible to measure the magnitude of Dr Munroe’s loss to the Bahamas and to the world,” Mr Christie said. “He was indisputably one of the most globally recognisable religious figures our nation has ever produced. His fame as an ambassador for the Christian ministry preceded him wherever in the world he travelled. He was a towering force who earned the respect and admiration not only of Christian adherents but of secular leaders both here at home and around the world.”

The prime minister remembered Dr Munroe as a man of “immense charisma and persuasive appeal.”

He said while he and Dr Munroe disagreed on things over the years, he saw him as a friend and spiritual mentor.

“I leaned on his counsel in a number of important matters, most recently in the consultations with religious leaders on the pending constitutional bills, a process in which he took an enthusiastic and constructive part, helping even to re-draft one of the bills that had met with a great deal of public controversy.”

He lauded Dr Munroe as a “great Bahamian of universal renown” who leaves the country as a better place because of his work.

He added: “This tragedy is both difficult to comprehend and accept but we know that Pastor Myles and his colleagues and family all enjoyed a deep and personal relationship with God and as such are resting in his arms.”

He remembered Dr Munroe as a world recognised teacher and leadership guru who “rose from humble beginnings” to gain international acclaim and respect.

“The Bahamas has been blessed because of the tireless and selfless work of one of our greatest sons,” Dr Minnis said. “He was an author of many books, a number of which are international best sellers. He often remarked that we should die empty, having produced all that God has birthed in us. No doubt the world will mourn with us here in the Bahamas.”

Last night, Mr McCartney said the country has lost “one of its greatest sons.”

He added: “Dr Myles Munroe, president and founder of Bahamas Faith Ministries, was without question one of the brightest lights this country has produced.

“At the time of his death, Dr Munroe was preparing to participate in the latest in a series of leadership conferences hosted by his organisation on Grand Bahama Island. This is indicative of the life Dr Munroe led. He was always eternally invested in the future and development of our great country, its direction, the strength of its leadership and its focus on the will of God,” Mr McCartney said.

Dr Munroe died when his plane, which had eight others on board, clipped a crane at the Grand Bahama Shipyard and crashed into a junkyard.

Lavard Parks and his wife Radel Parks, both BFM youth ministers, and their young son Johannan “Jojo” were also on board, according to a statement released by Mr Parks’ public relations team.

The Tribune has also been informed that Captain Stanley Thurston, another pilot, and an unidentified visitor from Africa were also on board.

Wow! Just think how many Bahamian school children are without school books and supplies because of that fancy ultra expensive watch on Christie's wrist in the above photo. Zoom-in. Yes indeed, the cost of that watch exudes gluttony of the kind only equalled by the cost of Bernadette's evening gowns, shoes, hats and hand bags! And now Christie and Bernadette want a Lear jet too!! I say: "Let's give them one. The bigger, the more seating, the more jet fuel, all the better."

And the Lear jets owned by the so-called evangelists, pastors and apostles of Jesus...... who did not own his own donkey (ass).

Christie looks sad and shaken....weep with those that weep

Christie's time is almost here and, of course, St. Peter will most certainly be rightfully wearing high quality ear-plugs when Christie comes knockin' at Heaven's door.

Who really wants Perry making a speech for anyone or anything right now ........ he is a pariah

Check out video on Mr Munroe it comforted me a lot. ( Dr Myles Munroe speaks of death on Jeff Koinange live show ) Youtube Check it out! Last month in Africa. He left us empty!

Word going around is that perry was going on that same flight too. . .but this time being tardy save him!!!

Jeepers! Even the devil way down below needs more time to make special arrangements for accommodating Christie's long lost soul, such be its evil magnificence!!

The PM really took that hard, it showed in his face and presentation. I think that is why he kept his head down and barely looked up, he was still crying. RIP to all the victims and rise in glory! My sincere condolences to all of the families, friends and co-workers affected by this tragic accident!

Don't be fooled mangogirl01 when it comes to the many faces evil can take on!

Oh it is the same face he put on when he spoke about the death of his press secretary.