Second shooting of day may have been retaliation 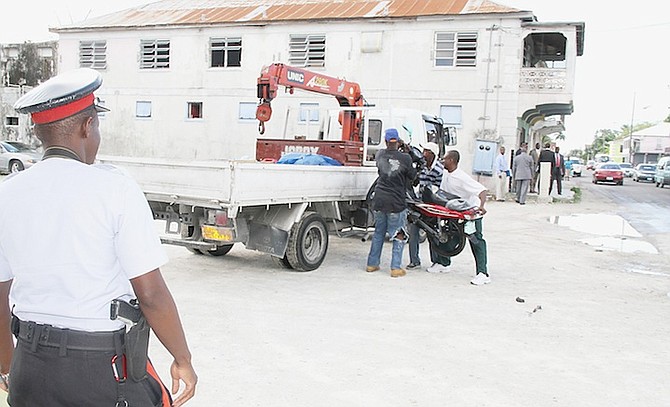 An officer looks on as the bike of an early morning shooting victim is removed from the scene.

A TEENAGER was shot multiple times early yesterday morning, minutes after he was reported to have been involved in another shooting four corners away that left a 20-year-old man in critical condition in hospital.

Police believe the two shootings are connected and that the second one was an act of retaliation.

The first shooting took place around 7:45am off East Street.

According to reports, a 20-year-old man from Lily of the Valley Corner was walking with his girlfriend when two men pulled up in a white Honda. One of the suspects, who the victim knew, jumped out of the car and shot the victim multiple times in the lower back. The suspects fled the scene, police said.

The victim was taken to hospital by a private vehicle where he is listed in critical condition. The girlfriend was unharmed during the shooting.

About 15 minutes later, police were informed of another shooting on Hay Street – four corners down from the first shooting.

Police said a 19-year-old resident of Hay Street was riding his motorcycle on East Street when the occupants of a blue Nissan Teanna “hit him off his bike.”

One of the suspects got out of the car, pulled out a handgun and began “discharging shots in the direction of the victim.”

The teen was shot multiple times in the chest. He ran into a home on McCullough Corner, where he collapsed. He was taken to hospital by a private vehicle where he is listed in critical condition.

According to Chief Superintendent Paul Rolle the teen victim is an “associate” of the man suspected of being involved in the first attack on the Lily of the Valley Corner resident.

He also said officers from the Firearms Tracing and Investigations Unit arrested a 23-year-old resident of King Street for questioning in connection with both shootings.

Police are unsure of the motive of the attacks.

I think we are at the stage where the police are given the right to go into any home and search for illegal weapons, large sums of ill-gotten cash and drugs. I for one have no problem with them searching my home BECAUSE I DON'T HAVE ANYTHING TO HIDE!!! How many other Bahamians can say the same??? If there are enough good Bahamians out there then we can pass a law to implement this. However, I fear that there aren't enough good people here anymore to move in a positive direction. Too many of us know friends or family members that have things to hide and will not agree to this for fear of them being caught. Our 'Christian Nation' is now officially 'Satan's playground'.

This man "sickened" gatta be crazy, let dem police in ya house they ga take more a ya tings than the robber

I hear and certainly understand you. Some police are worse than criminals. Unfortunately the home searching by police is the lessor of two evils. Sure some police will accept bribes to not search certain rooms and some police will certainly pocket some items but my hope is that the exercise will give the police an opportunity to go into suspects homes unannounced and catch them off-guard.

Something has to happen to get these criminals and, if we can't trust our (poorly educated/trained) police force then we are in very, very serious trouble.