Police are investigating social media use of plane crash pictures 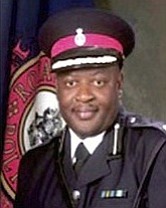 SENIOR Assistant Commissioner of Police Emrick Seymour has expressed dismay over the unconscionable circulation on social media of gruesome pictures of the victims in the plane crash in Grand Bahama last week.

“It is a despicable act and we are pursuing an investigation into it,” Mr Seymour said yesterday, ten days after the fatal crash that claimed the lives of Dr Myles Munroe, his wife Ruth, and seven others on board the Learjet 36. Immediately following the incident, photographs were taken of the victims at the crash site and circulated on social media.

ACP Seymour said the release of such photographs is disrespectful to the victims and their families. “It is so distasteful for people to really take advantage of these unfortunate situations by sending out all these photographs all over the worldwide web for everyone to see, without regard for the victims’ family,” he said.

“I want to ask them to cease. We are pursuing the investigation and wherever we find there is a breach we will take appropriate action against them. Not only this particular matter, but we are looking at all such incidents to see how we can get to the bottom of it.”

ACP Seymour is appealing to Bahamians to exercise sensitivity in such situations. “It is sad that Bahamians would try to take advantage of the misfortune of others by parading people’s picture over the social media for others to see for the fun of it. I get irate when I see things like that happening. I am asking persons to respect the sanctity of the victims and their families, if you have any bit of humanness in you,” he said.

ACP Seymour said there is a law and people have been prosecuted under it on two different incidents. “We will pursue the matter and whoever we find culpable we will take action against them,” he warned.

The Learjet was completely destroyed on impact and all nine persons were killed instantly. The plane went down around 5pm in bad weather after hitting a crane at the shipyard. The pilot was making an approach to land at the airport. Investigations are underway into the cause of the crash.

The police need to find all those voyeristc fools who display such sensitive and personal information on the internet and prosecute them ............. this is for real this is not like Rodney Moncur witch hunt.

I agree with you. there are more serious matters that need attention.

Definitely far more pressing issues that need being dealt with...with that being said, I saw a couple of the photos on FB and thought they were way out of line. It's dramatic enough seeing the crash site, I don't need or want to see dead and mangled bodies. There are also photos on 'news bloggers' FB page of the gal that just got stabbed to death by her boyfriend, laying there in a pool of blood. Really? Is that totally necessary?

All this shows is how callous Bahamian society has become. Look at how many of our young men are willing to take a life much less share disgusting pictures. This is what happens when children are not taught love and respect. The social ill's of this nation are massive and getting worse. The future most certainly looks bleak!

The irony here is that the police are attempting to go after people on social media when a few years ago it was one of their officers who leaked case details. When the lady was murdered by her boyfriend a few years back and the pictures, police files included were all over social media and email. To date no one knows what happened to the offending officers. No case was ever brought before the courts and the family of that victim had to endure the pain of it all. The COP took it upon himself to protect these scoundrels from public ridicule. I said it then and will say it again, the COP was wrong. He should have fired them, prosecuted them and allow them to accept responsibility for their actions. To this day the officers responsible have still not been made known to the public. The RBPF is not a private firm and the COP does not have the right to just quietly do away with matters of public interest.

Now comes 2014 and the rank and file want to go after people for social media postings. I most certainly agree that its disgusting and stupid for people to have taken these pictures. It tells you where we are as a people. This is a most tragic event and we find ourselves right back to the same old antics. The COP and the rank and file of the Police Force need to get real and do things in fairness and transparency. Most of these leaks come from within their ranks and it would be appreciated if they start their investigations there. Second there is no proper legislation to govern these things. It is most certainly in poor taste but I suspect that even if found the Crown would have a hard time building this case. The lesson here is that Bahamians need to learn what it is to be decent, respectful and show a little class. We've become savages and it seems anything goes.

This is a collossal. Humans (not just Bahamans) have always been intrigued and fascinated by the macabre...nothing new here. In Mexico I was shocked to see this type of gruesome photo on the front page of major news papers (in colour). I found it distasteful so I would not buy the papers but I still took a peek at the headliines when I was in a news stand. Something deep in my psyche needed to see

True. But, personal intrigue is one thing, spreading the photos within minutes to when the families are still in absolute shock is uncalled for. Also Mexico may have different cultural and social practices that may not be applicable here. Do you recall when the governing party was campaigning in the last election and they put those posters of the murder count up? The people went mad and that was just showing data. So can you imagine if our newspapers had images on the covers. It would not go over well.