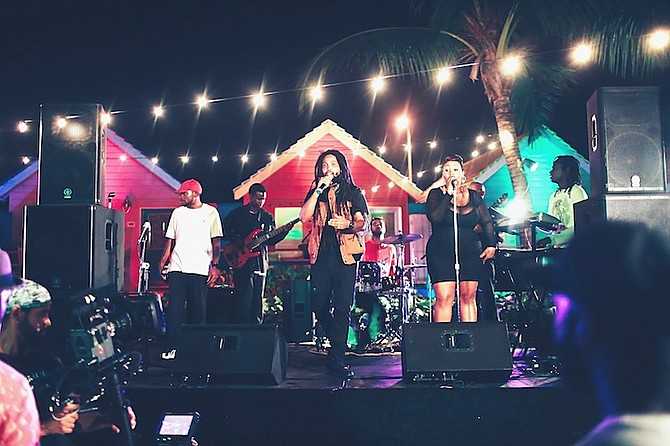 Willis and the Illest shoot their video for the unreleased Bob Marley track 'Real Good Time/Bass is Heavy'. Photo/Theo McClain

SELF-PROCLAIMED sophomore reggae band Willis and the Illest hope to harness and showcase the power of music in their new music video for an unreleased Bob Marley track “Real Good Time/Bass is Heavy”.

The band wrapped up a gruelling one-day shoot last weekend that will take fans through scenes in Gambier Village and Compass Point as it portrays the impact of the group’s music through the eyes of a young boy.

A throwback to a life-changing experience lead singer Willis Knowles had in Ethiopia, the video’s true star is seven-year-old Mosiah Bain.

Tribune Arts & Entertainment sat down with the band’s lead vocalists Willis and Mandisa Kerr on the sidelines of Sunday’s video shoot.

“It feels good,” Willis said, “it’s an honour and it’s exciting to be able to stumble across material that is so influential and to be able to bring it to the world. By finding the magic of it and wanting to share the same thing with the audience and everyone around.”

“The overall story is the power of music and its effect on people. It’s in everything, every day life we hear sounds around us and basically the theme of ‘Bass is Heavy’ and having a ‘Real Good Time’ is what we tried to tie into the story line.

“We don’t want to give too much away,” he said, “because the finale is at the end of the production and it will all tie together.”

The original track was recorded in 1980 but never released, and with copyright holders keeping tabs on the Illest rendition, the band is hoping the video will spark a formal partnership.

The video’s story arc ends with a concert at Compass Point, a critical venue in the professional life of the band, and a sentimental nod to Marley’s work in the Bahamas with producer Chris Blackwell, who founded Compass Point Studios.

“It’s still kind of a work in progress, like anything of this nature,” Willis said, “the copyright holders are aware of the project and they’re very excited to see what we come up with. So fingers crossed, it should be a go from there.”

The band’s lineup has morphed over the six years since it was formed by Willis, pianist Terry Johnson and drummer Enrique Rolle, with the exit and reentry of numerous core members and new faces. It’s a phenomenon that both Willis and Mandisa attribute to the flexible nature of family.

The shoot also saw the return of Terry on keys, with longtime members guitarist Ashley Algreen and trumpeter Ronald Campbell.

Mandisa said: “It is a blessing that we are still together. Most of the original members are still here and we push forward even if anyone has to dip out for a second or two. Family always comes back, such is life.”

“With the originals,” she said, “it’s awesome right now because we started out doing a lot of covers and we did that to get the people, to expose ourselves to them so they could love us.

“Then when they heard our original music, they were like ‘oh I didn’t know they had that in them too’, so that just made them love us more,” she said.

“People didn’t think we would have progressed this far, but the most important thing was that we believed that we would have gotten here.”

As the band achieves further milestones, the singers underscored the importance of a strong support system and personal drive as budding parents.

“I’ve been doing this (parenting) for four years now, going on five,” Mandisa said, “and I’ve been with the band for six.”

“It’s been tough, but at the end of the day you know the goals that you’ve set for yourself and where you’re going. I know what I put in place for my family, so that’s always something to look up to and look forward to, that you’re doing this for them, you’re not just doing it for yourself anymore. To move forward knowing that they’re going to have a better life than you did.”

The group turned to Lavado Stubbs of Conchboy Films to direct the video, with producer Henrietta Cartwright and assistant director Sean Kickerrachie. It’s the second project following “Lion in the Jungle”, and Mr Stubbs hinted at possible future projects as he hopes to bring international standards to the local film industry.

“They (Illest band) are very much collaborators,” Mr Stubbs said, “and that’s great as a director to have the artist heavily involved in the project with the ideas, the concept; it’s a great feeling.

“Willis’ energy from ‘Lion in the Jungle’, his energy just goes up to the roof and that’s the great aspect of working with the band. Their energy, it adds a whole other element and that’s one of the things I always get when I’m working with them.”

The final phase of the project is a promotional tour; however, the band is also exploring creative formats to release new work.

“I think I could positively say that the industry is growing,” Willis said.

“I still think that we have a lot of downfalls in our industry, but I think the generation of artists that are being produced out of the Bahamas right now, we’re sort of doing it and making our way as we go and making it happen no matter what and that’s all it takes.”

“I won’t give you too much information,” Willis said, “but we are in the process of putting together a body of works. We’re trying to be very creative in the way that we deliver it to our fan base. Whether it’s through visuals in a timely manner, releases or singles along the way, but we want our fans to be more engaged in following the process.”